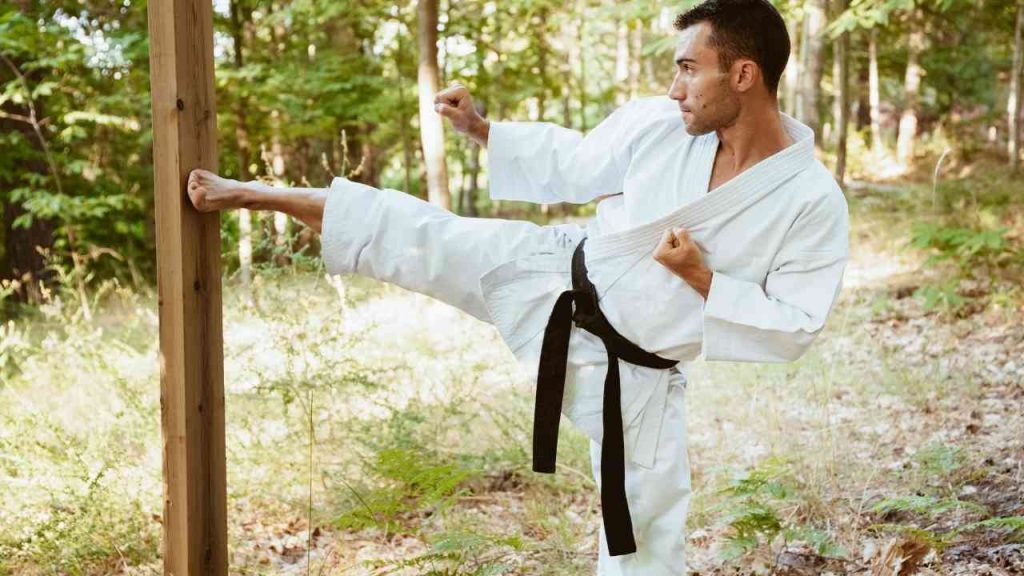 Okinawan Karate is amongst the most popular martial art styles in the world. We all have heard about ‘karate’ since our childhood, but only a few of us know how it actually began.

As a karate enthusiast, I always wondered how such a famous martial art developed on an ‘island.’ And how Okinawans continued to practice their fighting skills in such difficult political times.

When I started reading the history of karate, the strength, enthusiasm, and devotion of these indigenous people astounded me to my core. This is why I thought of sharing it with all the karate champs through my blog.

The Origin of Okinawan Karate

The origin of Okinawan Karate dates back to the time when Ryuku Kings came into power.

In the 14th century, under the rule of King Shō Shin, there was a ban imposed on the practices of martial arts. Teaching, learning, or even writing about martial arts was prohibited.

However,  In those times, the teachers of Okinawa did not give up. When the king prohibited weapons, masters like Kanga Tode and Bushi Matsumura started private training of ‘the empty-handed fighting technique’ in stealth. It’s because young Okinawans needed skill for self-defense more than ever.

During that time, monks, fighters, travelers, and merchants used to travel to China from Okinawa to gain knowledge in different aspects (as the Chinese continent is not very far from Okinawa). The direct impact of this locality was seen when Kung-Fu became a part of Okinawan martial arts.

It is known as ‘Heiwa no Bu,’ which means the ‘art of peace’ in Okinawa. There are around 130 million people globally who are karate practitioners and fans, so this art form is extremely popular.

Okinawan karate form focuses more on making a ‘dignified and noble karateka’ than a ‘good fighter.’ What makes it stand out is its elementary karate principles. Karate teaches its practitioner the importance of respect while fighting, as the teaching says that “karate begins and ends with respect.” The fundamentals of karate also say that “it always stands on the side of justice.”

This shows that, unlike other fighting art forms, the Okinawan Karate is all about peace, positivity, and harmony rather than fights. As its karatekas are taught to “never attack first.”

The traditional karate practices in Okinawa were more inclined towards self-development (Budo) and self-defense. They were considered a way of living as they developed one’s mind and body.

But the modern karate forms are used more as a form of sport, close combats, and competitions, in which the main goal is to win the game or score points.

Another difference between modern karate and traditional karate is that the traditional form focused on a minimalistic approach in fighting spaces. In old Dojos, there were just empty rooms with hardwood floors to fight on.

In contrast, the modern karate spaces are sportier and fancy in looks. It has mats on floors and paintings on walls to create a karate vibe.

Also, in traditional Okinawan Karate, there was no belt ranking system. But the modernized Okinawan karate belt system has ranked for each phase of learning.

Each Okinawan karate style is derived from either a particular karate master’s style or a mix of different master’s techniques.

But, the 4 core styles of Okinawa Karate are:

Goju-Ryu is one of the old styles of Okinawan Karate. This style includes a blend of hard and soft fighting moves and techniques.

Kanryo Higaonna, the founder of Goju Ryu, was one of the noblest people of Naha and the pioneer of the Naha-te fighting style. Higaonna and his heir Chojun Miyagi were the ones to set the base of Goju Ryu.

The name of Goju Ryu had ‘Go,’ which means ‘hard,’ and ‘Ju,’ which means ‘soft.’ The hard techniques refer to the close-hand hits and the straight attacks, whereas ‘soft’ means the circular movements.

Okinawan Goju Ryu karate had all the components of karate from close hand kicks, punches and attacks, breathing techniques, and open hand saving methods to protect oneself when attacked.

Shito Ryu comes from the blend of NahaTe and Shuri Te. It was founded in 1931 by Kenwa Mabuni. It is the most famous art form in West Japan. Kewa Mabuni studied the Okinawan Shuri Ryu Karate in-depth and developed this art form.

This style mainly focuses on direct attacks, so there is a lot of emphasis on the Katas. There are more than 90 katas in this style, and most of them are focused on either attacks or blocks.

Uechi Ryu is a traditional Okinawan Karate style. This style was named after Kanbun Uechi and was initially called Pangai-noon in China, which combines hard and soft.

Uechi Ryu is highly influenced by the Chinese martial arts style ‘Kung Fu.’ This art form has only eight katas which are the basis of its training.

Shorin Ryu comes from the word Shaolin of Chinese origin. Shaolin is a temple founded by Shorin Ryu in 1933 in China, where Kung-Fu is practiced.

It is one of the modern Okinawan art that blends the fighting methods of Shuri-te in it. It has a total of 18 katas and is focused more on kicks, punches, and katas.

Okinawan Shorin Ryu karate has many sub-styles, amongst which Matsubayashi-Ryu is the most common one.

Numerous changes happened to the original Okinawan Karate when it came to mainland Japan. Some of these differences are mentioned down below:

Karate in Japan is considered a healthy exercise rather than a self-defensive martial art. Karate enthusiasts in Japan practice it because they believe it’s good for their health. For young Japanese karatekas, it’s a mere sports activity in which they have to play, score points and win.

It was not the case with the original Okinawan Karate. For Okinawan Karateka, this martial art practice was a way of living. It taught them humility, dignity, and respect.

The original Okinawan karate katas and stances were designed for survival in close combat. It was the fighting technique that was only used to protect oneself in an attack. To them, it was their only defense method that helped them get through challenging political times.

The East-West Okinawan Karate was not designed for demonstrations or shows. That’s the reason why Okinawan karate stances are higher, more natural, and easy to adapt. The main aim behind those moves was to defend oneself from danger. In Japanese Karate, the katas and stances are unnatural, forced, and developed to keep the body fit.

Okinawan Karate is more focused on the whys of each action. The karatekas in Okinawa were taught the ‘why’s way’ before the how’s. According to the masters, they needed to know why they were doing what they were doing.

In Japanese style, the karateka is more focused on the perfection and completion of actions.

The traditional martial arts included Kobudo in its curriculum. Kobudo refers to the weapons used in Okinawan Karate. The most famous Okinawan Karate weapons are as follows :

Master Funakoshi once said: ”Do not think karate belongs only in the dojo.”

Karate is practiced in every subcontinent. There are more than 500 Dojo’s in the world that to date provide karate training to karatekas. However, these two Dojos hold significance in Okinawa’s karate history.

Jundokan is the most famous Goju-Ryu Dojo in Okinawa. Master Eiichi Sensei founded this academy.

It was designed in the traditional Okinawan karate Dojo style, with a wooden floor and simplistic accessories. The walls have hanging calligraphy frames made by Miyagi and have a sculpture of Miyagi Shogun to increase the grace of the dojo.

Shodokan was founded by Higa Seiko, one of the most famous masters of Naha-Te in Okinawa. This famous Okinawan karate school has posters of various Naha-te masters with calligraphy and has a simple wooden interior.

This dojo was also popular for the Kobudo karate practices and, to date, has the Kobudo weapons hanging on its wall.

The most famous Okinawan Karate masters of all time were:

Kanryo Higaonna was the founder of the Naha-te fighting styles. He is one of the pioneers of Okinawan karate. The modern karate teachers of Okinawa to date teach his style in Dojos.

Higaonna went to China in 1876 to study Chinese martial arts. After he mastered the Chinese fighting style, he came back and trained many other karatekas in Okinawa and mainland Japan.

He was such a brilliant teacher that one of his students, Chojun Miyagi, learned from him and developed his own art form named Goju Ryu.

Kenwa Mabuni is another famous master of karate and the founder of Shito Ryu Karate. He is one of the first masters to teach Karate in Japan. He was born in Shuri and started practicing Shuri-te at the age of 12.

Kenwa learned both Naha-te and Shuri-te and developed his fighting style. His style has been practicing in Okinawa and Japan till date.

Anko Itosu is the father of modern karate. He was born in Shuri and was an active part of Karate practices in the Ryuku Kingdom. He is one of the pioneers who made karate a part of the modern Okinawan school curriculum.

Kanbun uechi was the founder of uechi ryu karate.  Uechi was amongst the very few people who went to China to study Panginoon or kung-fu. He came back to his homeland and taught the Chinese kung-Fu to the karateka of Okinawa and Japan.

If you’re a karate enthusiast, there’s nothing like too much information. The books mentioned below will get you hooked.

Gichin Funakoshi, the writer of this book, was an honorable master of Okinawan Karate of his time. This book is his autobiography that digs deep into his experiences, learning and covers his complete life story.

2. The Essence Of Karate-Do By Shoshin Nagamine

This amazing book written by master Nagamine gives excellent insights into Shorin-Ryu karate, its history, stances, and katas. The pictorials in the book provide great help in developing the understanding of each move.

3. History and Tradition Of Okinawan Karate By Hokama Tetsuhiro

This book covers the ancient history of Okinawan karate and the detailed, in-depth research of events and life stories of pioneers of karate. It also represents techniques and training guides for new karate kids.

Okinawan Karate is practiced in various parts of the world, as it is the most reliable self-defense martial art to follow.

I hope this post has answered all your questions regarding Okinawan karate, its styles, and the differences between Japanese and Okinawan Karate.

Wanna know more about karate styles, check out this article: 13 Main Karate Styles and Their Differences