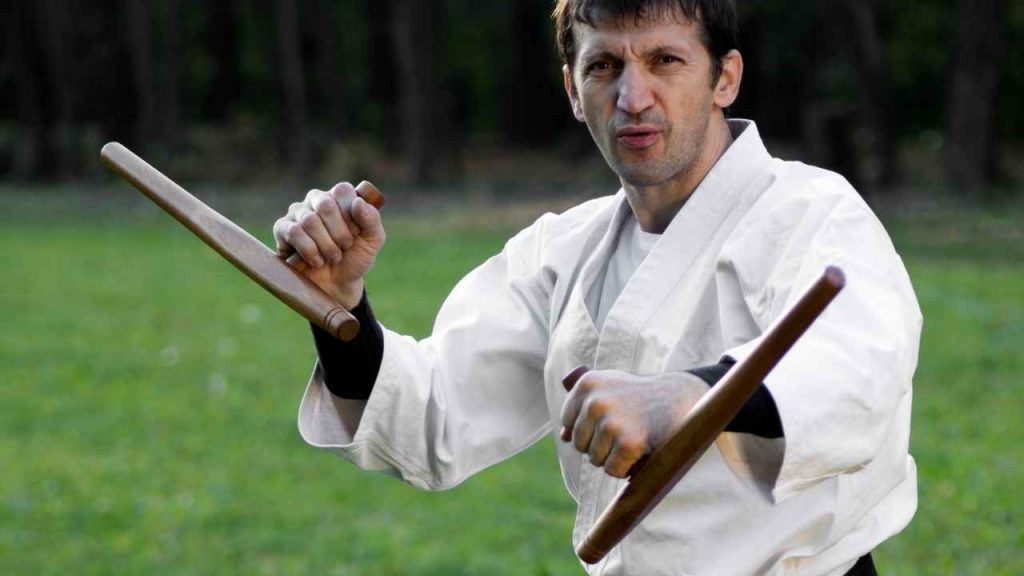 “The Way of the Empty Hand.”

That’s what Karate means in Japanese, right? So, why are we talking about a traditional martial arts weapon?

Though Karate itself was developed as a method of empty-handed defense, it wasn’t developed alone.

The same people who practiced the Okinawan martial art that eventually became Karate practiced with a variety of weapons as well. This art came to be known as Okinawan Kobudo, Karate’s sister art.

The Okinawan tonfa weapon is one of the most recognizable weapons used in Kobudo. Let’s learn more about this traditional martial arts weapon here!

What is a Tonfa?

The tonfa is a stick traditionally made from strong red or white oak. It measures between 15 and 20 inches long with a perpendicular handle sticking out about ⅓ of the way down the shaft. The tonfa is meant to be used in pairs.

The main idea of the tonfa is to serve as reinforcement of the user’s arms. The long side of the weapon runs down the user’s forearm and, if properly sized, should extend about an inch or two past the elbow.

In this position, the tonfa reinforces the user’s arm and allows them to block attacks even from weapons such as the bo staff. The ends can also be used to reinforce the fists while striking, or for stabbing.

Finally, the user can flip the tonfa around and hold it near the bottom of the shaft. The handle can then be used for hooking weapons to disarm opponents, much like the kama weapon, another traditional martial arts weapon.

Check out this quick Tonfa demonstration to see this weapon in action.

What is Tonfa’s Real Name?

Tonfa (also spelled tongfa or tuifa) is the most common name you’ll hear these days. However, the tonfa weapon has been known by different names in different regions.

The Chinese tonfa word, guai (柺), literally translates “crutch” or “small walking stick” which kind of makes sense when you look at its form. In Malay, the tonfa was known as topang. This word also translates to “crutch”.

Like most martial arts weapons, the full tonfa history has been lost to time.

One theory indicates the tonfa originated as a handle for a millstone used by peasants. When the Samurai banned the use of weapons on Okinawa, peasants turned to simple tools like this to use for defense.

However, many historians believe that the tonfa originated earlier in other areas, possibly China, Indonesia, or Thailand.

Regardless of how it began, the tonfa has proven to be an effective weapon. So effective, in fact, that a tonfa-like weapon is still in use today. The modern police baton is basically a tonfa and the design is based on this martial arts weapon.

There are a few different types of tonfa with minor variations between them. They all have the same basic shape, a stick with a perpendicular handle. However, they can be made from different materials as well as modified slightly.

The traditional tonfa was made from wood and that’s still a very popular type of tonfa in use today. Rather than being circular, wooden tonfa sticks are usually boxier, almost square.

Tonfa can also be made from aluminum, indestructible plastic (polypropylene), or foam for practice.

Some tonfa weapons have spiked ends to make striking more deadly. I also found references to bladed tonfa, but as far as I can tell they mostly exist in fantasy video games.

The tonfa dimensions are generally between 15 and 20 inches. However, proper sizing for the practitioner is critical to be able to use the weapon effectively.

When holding the tonfa, the long edge should extend just an inch or two past the elbow. Measurements should be taken from the fist on the pinky side of the hand.

The grip should also be sized to your hand. If the grip is too long or too short, the tonfa becomes difficult to use. Typical sizes range from 3 – 4 ½ inches.

How to Use Tonfa?

Tonfa sticks are a versatile weapon that can be used in a number of ways. When holding the handle, the long shaft of the tonfa runs down the user’s arm. This reinforces their arms for blocking and serves as an excellent defense.

The user can also hold the tonfa by the end of the shaft and use the handle for striking or disarming an opponent. The tonfa can also be spun/swung and strike the opponent with tremendous force.

Since the tonfa are typically used in pairs, it requires tremendous manual dexterity to use them. The user has to be able to switch between holds without using their other hand (or dropping the tonfa).

There are a few tonfa katas designed to help students master tonfa techniques. One of the main ones, Hamahiga no Tonfa, is named for the beach Hamahiga on the island of Okinawa.

Students who fully master this tonfa kata will be well on their way to mastering the tonfa.

Is it Legal to Carry a Tonfa?

The legality of carrying a tonfa varies from region to region. Some places allow people to possess tonfa and carry them to and from their dojo for practice. Other places restrict even the ownership of tonfa.

Even in places where tonfa sticks are legal, it can be a gray area about whether you are allowed to carry a tonfa for self-defense.

To be on the safe side, check with your local law enforcement.

Is the Tonfa an Effective Weapon?

Definitely. There is a reason that modern police carry a tonfa baton. The tonfa weapon is extremely versatile and effective.

The Okinawans favored the weapon because they are relatively easy to conceal. Even so, in the hands of a skilled practitioner, they could hold their own against a bo staff and other long-range weapons.

In today’s world, tonfa weapons probably aren’t very practical. Our modern clothing doesn’t allow us to easily conceal these weapons. Plus, the dubious nature of their legality in many areas makes them somewhat dangerous to carry for legal reasons.

Furthermore, learning the tonfa requires significant effort. Plus, most schools will only teach advanced students who have already mastered the basics of Karate.

The tonfa stances and techniques build on what martial arts students are already learning. Because of this, a black belt can fully learn the weapon relatively quickly. Even so, it will take about 12-18 months of regular training to master it.

You might wonder then why do policemen carry these weapons? They obviously don’t go through so much training. That’s part of the reason they only carry one, plus the police baton is not typically used to the same extent as a real tonfa fight. It is simply there as a non-deadly weapon option for the officer.

Should You Learn the Tonfa?

As a complement to your martial arts training, tonfa training is an excellent idea. It helps build your coordination and dexterity and is downright a lot of fun.

Be prepared for some hard work, though. Mastering one tonfa weapon might be relatively easy, but using two at the same time takes some serious practice.