Uechi Ryu Karate – The Art Of Unarmed Self Defence 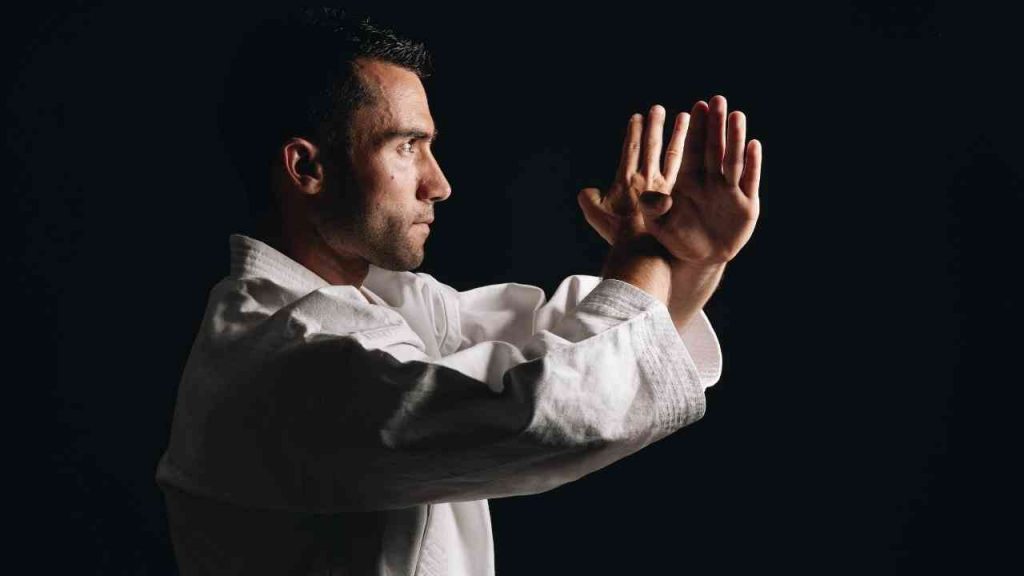 Have you ever wondered why Uechi Ryu Karate is so similar to Chinese martial arts – Kung Fu?

When I was aspiring to become a karateka, I observed many different Karate forms. But even after observing many, Uechi Ryu’s practices, unique moves, katas and the humility karateka possesses, always intrigued me.

After a year, I started practising Uechi Ryu myself and that’s when I found out why Uechi Ryu Karate  possesses chunks of Chinese art forms.

So, let me tell you the tale of this blended Chinese and Okinawan Art form, ‘Uechi Ryu’.

What Is Uechi Ryu?

Uechi Ryu Karate is one of the most significant Okinwara martial arts styles in Japan which is named after Kanbun Uechi. It was founded in the mid 1900s and is still used effectively. This style has a taste of both Chinese and Okinawan karate which is why it is referred to as Uechi karate in Japan and Kung-Fu in the US, China, and other parts of the world.

This Uechi style of karate uses both soft and hard fighting skills which require the practitioners to harmonize their mind, spirit, and body. It is a popular karate style in the domain of self-defense and close combat which is why it requires both flexibility and body strength.

Uechi Ryu Karate is one of the most realistic and crucial-looking fighting techniques amongst all other karate styles. In Uechi ryu training, practitioners not only learn to control their body but they prepare it to fight for longer periods by controlled breathing and body training. Each kata, punch, stance and kick of Uechi Ryu is aimed towards protecting one’s self from close enemy encounters.

The basic emphasis of Uechi Ryu is on learning the art of harmonizing one’s mind and body and coordinating them in fights.The hardening and curing exercises like Sanchin, and Kote makes them learn when to defend and when to attack. This is why, for a Uechi Ryu practitioner it is crucial to have both strength, resilience and flexibility in their body.

And that is not it, the study of these karate techniques enhances the intrapersonal qualities of the practitioner as it enhances patience and wisdom in them.

The Orientation Of Uechi Ryu

The Roots of Okinawan’s Uechi Ryu Karate heads back to the Shaolin Temple of Northern China. It was originally the karate form that was used in Chinese temple fights under the name of Fwange-Nun.

The History Of Uechi Ryu

Kanbun Uechi, The founder of Uechi Ryu Karate was born in Izumi village in the year 1877 in Okinawa. He spent his early life in Okinawa learning basic martial arts. But, after he turned 20, he moved to China as he did not want to serve in the Japanese military.

In the Fukien province of China, he found a Buddhist priest Shushiwa who had mastered the art of the Chinese temple fight “Fwange Nun.” Uechi got so intrigued by the Chinese martial art form that he became a student of Shushiwa and learned Fwange Nun for the next ten years.

In the Nanchong city of Fukien, Kanbun himself became a master and taught student Fwange Nun for three years. In 1910, Master Uechi became popular as the first Okinwanian to be accepted in China as a martial arts teacher.

Then in 1927, the Uechi family moved to Osaka, Japan where Kanbun started teaching his son the art of Fwange Nun. These classes slowly continued and that’s when the term Uechi-Ryu was first introduced in Japan. In 1940, the style was named after Uechi in Japan.

Most Chinese martial arts moves are inspired by animals. The fighting forms were developed by watching animal fights and bringing those techniques into human fighting practices.

In Japanese, Kata means form. Katas are the basis of any martial art form. It teaches the basic moves, kicks, and pouches of the art. Uechi Ryu consists of eight katas in which the basic three Katas are Sanchin, Sanseiryu, and Seisan.

Kumite refers to freestyle sparring against a human opponent. In Uechi Ryu, there are three Kumite.

Originally, there were no straight punches in Uechi Ryu Karate as it was focused on other striking moves. ‘Shoken’ was added to Uechi Ryu by Uechi Kanei. In Japanese, Shoken means small knuckle. It refers to the second knuckle of the first finger which is used to attack.

The attack move is to strike a punch with the small knuckle outwards with enough force to tear the enemy’s body tissues. The attacking points are neck, ribcage, throat, and legs to leave the opponent injured.

Shoken is often referred to as the tiger’s tooth as it is considered a deadly defense weapon because the pain is as intense as a tiger’s bite.

The front leg defense only kicks ‘Sokusen’ is present in all katas of Uechi Ryu except the first, Sanchin. For the kick, feet are first conditioned to be able to take hard contacts. The toes are conditioned in a way that they are tightened enough to gather the force to attack.

This big toe kick is generally aimed toward the middle and lower body of the opponent. It is effective for defense because this kick is focused on a smaller area and has an enormous force to impact the opponent’s body parts.

Another one is the ‘Sokutu Geri’ kick that uses the side of the feet as a blade to attack. This kick is aimed towards the opponent’s lower body and is directed with force to end the fight.

Uechi Ryu uses the circular blocking method to defend against an opponent’s attack. It is considered one of the most crucial blocks in the range of Okwanian Ryus.

This blocking method is used for blocking punches and kicks at the same time. This method is not only effective for defense but it makes the practitioner’s shoulders so strenuous that they can misdirect the opponent’s attacks in no time.

After these ranks are achieved, the students step into black belt ‘Dan’ levels.

Is Uechi Ryu Karate Effective For Self-Defense In A Real Fight?

Yes, it is! Uechi Ryu Karate is designed to fight close combat. All the moves, kicks, and punches are focused on defending and attacking in a way that has a powerful impact on the opponent. Some of the moves like Sokusen and Shoken are strong enough to impair the opponent.

Like all other martial arts techniques, Uechi Ryu Karate takes its time and dedication to learn. It is definitely not the easiest style to conquer but once the practitioner gets the hold of it, it enhances the mental and physical toughness and also awakens the spirituality in the learner.