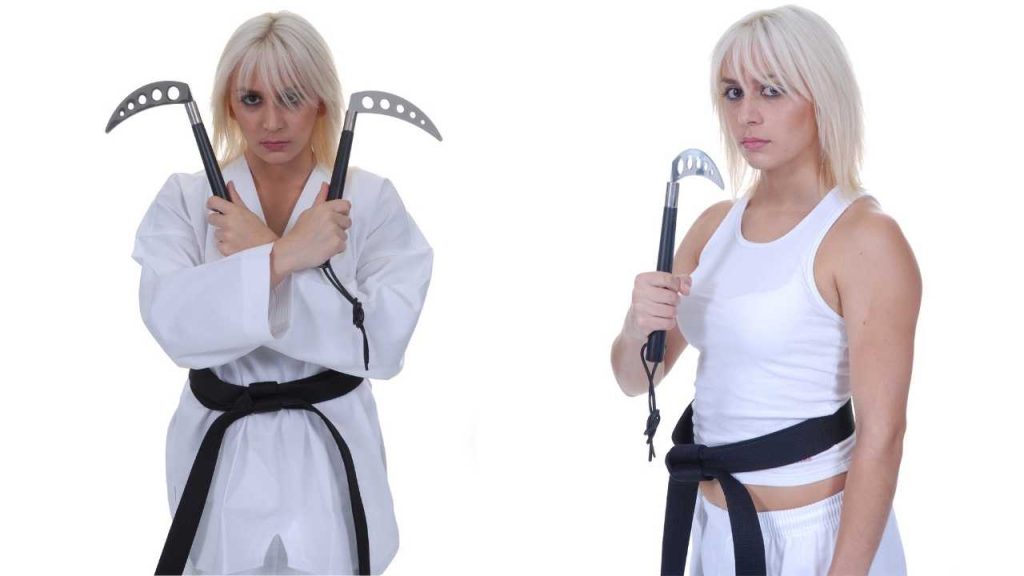 It may seem odd to talk about weapons on a Karate blog. After all, Karatedo in Japanese means “the way of the empty hand”.

Nonetheless, there are various weapons used in Okinawan Kobudo, the weapons art that is closely tied to Karate’s history.

The kama weapon (or kama sword as it is sometimes called) is one of them.

When you see this intriguing ninja scythe weapon, it may conjure images of the Grim Reaper in your mind. With good reason, since the kama basically looks like a short-handled version of the nightmarish figure’s scythe.

There’s a good reason for that too. Let’s dive in and learn all about the kamas here.

The History of Kama Weapon

The Kama, a hand scythe weapon, like many of the Okinawan weapons, started as a humble farm implement — the sickle or mini scythe. That explains the similarity to the Grim Reaper’s weapon. A scythe is simply a long-handled, longer-bladed version of the same farm tool.

This short-handled version was used to cut rice, wheat, grass, and other crops. The handy tool was used not only in Okinawa but also in many places throughout Southeast Asia. In fact, the kama makes an appearance in many types of martial arts from the Philippines, Malaysia, Indonesia, and even China.

As is a common story among Okinawan weapons, the Japanese kama became a weapon when the ruling Samurai class banned and confiscated weapons from the peasants.

When you had nothing else to defend yourself, the wicked blade on this sickle made a handy substitute. The tool didn’t even have to undergo much evolution to be used as a weapon.

The kamas basically looks the same as its farming tool predecessor, though some kamas include a small strap on the end of the handle. Advanced practitioners can use this strap to lengthen their reach or swing the kamas at greater speed.

Though all martial arts kama have basically the same form, there is some variation. Most have straight handles, but some handles have a gentle curve to them. Plus, the shape of the curved blade at the top can vary slightly.

Many modern kama weapons have holes in the blade, just like the original kama. This makes the kama lighter and thus speedier and easier to wield.

Real kama can have wood or metal handles with blades made of metals like aluminum or steel. They may come sharpened or unsharpened.

The end of the handle is sometimes honed to a point, giving the practitioner a stabbing weapon they can use to impale their opponent.

A variety of demo and competition kama styles are also available. These are important for those who would like to learn to wield the kama without losing a body part. Training kama may be made from wood, plastic, or foam.

How to Use Kamas?

Though small and relatively easy to conceal, the kama is an effective weapon. They are typically used in pairs with one in each hand. The Okinawan peasants loved them because were even effective at defending against long-range weapons such as the bo staff or samurai sword.

Common moves include blocking or deflecting an attack with one kama and mounting an immediate, almost simultaneous, counterattack with the other.

The point of the blade can be used for hooking or stabbing in a circular motion. The blade itself can also do some serious cutting damage.

The kama can also be used to trap the opponent’s weapon and disarm them. Some kama have a little notch where the blade meets the handle for this very purpose.

The kama is a dangerous weapon, not only to the opponent but also to the practitioner. It is imperative that students begin with training kama to avoid injury.

Even advanced practitioners should only use kama when their head is in the game. Small distractions can have serious consequences.

Learning kama tricks and drilling them over and over is an excellent way to improve your familiarity with the weapon. There are a number of these drills that students will learn.

Finally, it’s a great idea to practice kama under the direction of an experienced instructor. It’s way too easy to hurt yourself.

Kama weapons today are almost strictly used for demonstration purposes. You won’t really see anybody carrying kama around for protection.

There are various kama katas used for training and demonstration in Karate today. Kama fighting is rare because of the danger.

Interested in a demonstration? Check out this video to see the kama in action.

In general, it is legal to own kamas and acceptable to carry them with you to the dojo and back for training purposes. However, it is generally illegal to walk around on the street with a pair for self-defense purposes.

Of course, the rules vary depending on your location. If you are concerned about the legality of owning or carrying kama, talk to your local police department. This will get you the most accurate information for your area.

The standard handle size of the kama is 14 inches. However, it is possible to order custom-sized kama to more appropriately match the length of your arm.

Still have some questions about kama weapons? Read below for a few answers!

Absolutely, with the caveat that the wielder is skilled. The kamas are hard to manage and self-injury is a very real possibility. However, when used correctly, the kamas are a formidable weapons capable of defending against much larger weapons such as the samurai sword.

Is the kama a scythe?

Technically no, the kama is a sickle. Though their purpose as farm tools is similar, a scythe has a longer handle and a longer blade. However, kama is the Japanese word for scythe, so it can be confusing.

Some of them can be. Advanced practitioners may choose to work with sharpened kama. However, many kama are sold unsharpened for safety.

Did Samurai use a scythe or a sickle?

Unlikely. The Samurai were the ruling class that prohibited the peasants from using weapons. The peasants began using the kama, a farm tool, as a way of defending themselves.

Samurai already had their katanas, wakizashis, naginatas, and other more formal weapons. It’s unlikely they would have used a scythe either for farming or for defense.

If you’re looking to add weapons training to your martial arts journey, the kama is one of the most difficult. However, it is also a very satisfying weapon to master. Training with Karate kama is also fantastic for further honing your concentration and coordination skills.

If you decide to dive in, we definitely recommend that you start with training kama. We don’t want to see you hurt yourself!