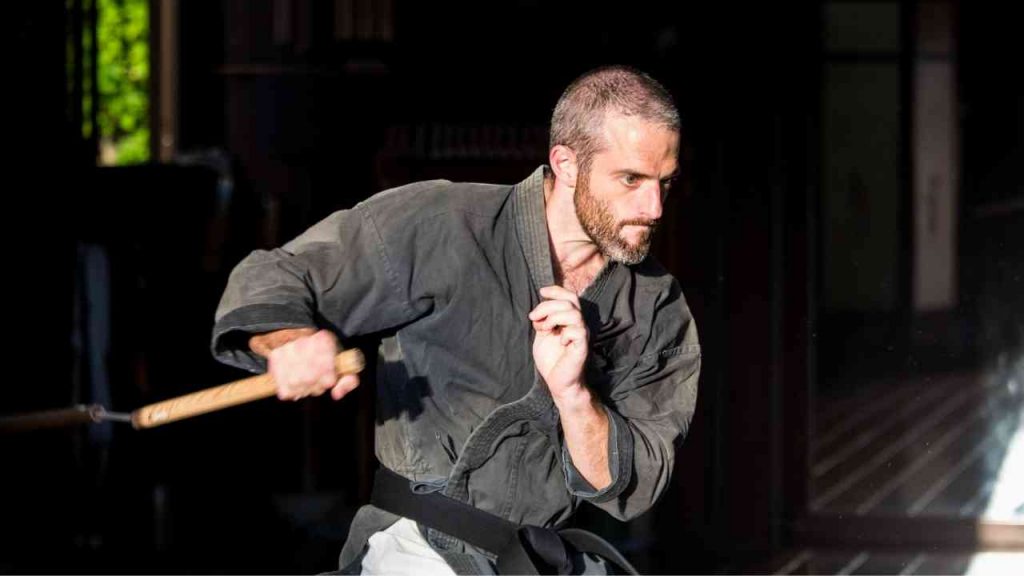 Do you know what Kobudo means? Well, it means “old martial art.” However, most people claim it to be the “old martial way of Okinawa.”

And that’s no doubt true. Because like Karate, it was also developed in Okinawa. That’s why we can say it as Karate’s sibling.

Karate is usually an empty hand art, while Kobudo is purely a weapon art.

It is said that if a person learns Kenjutsu (Japanese sword martial arts) and Kobudo (Old martial way of Okinawa) and fights real fights for 5 years, he can become better than Miyamoto Musashi (a well-known Japanese swordsman in history).

Okinawan Kobudo (沖縄古武道) is an ancient weapon-based martial art. It finds its origin in Okinawan martial arts. It isn’t very popular in the modern-day world, though. But it has distinct recognition in the history of martial arts.

The most challenging thing I can relate to Kobudo is the wide range of weapons it uses. This range not only makes it hard to learn but also an interesting art.

In the 14th century, King Sho Hashi established his rule over Okinawa. He imposed a ban on all weapons in Okinawa. In 1609, the Samurai of Japan occupied the island and again banned possession of any kind of weapons.

These bans initially raised the interest in unarmed fighting arts. It is a common belief that later Okinawan farming tools turned into weapons due to these restrictions. The evolution in the weapon systems was the only way for them to protect themselves as they were under Japanese rule and weaponless.

Some believe that Okinawan martial arts are the predecessors of Karate martial arts. Some styles of Karate also include certain Kobudo practices as a part of their training.

Some Okinawan Kobudo katas have undergone less transformation as compared to Karate. So, they are present in nearly the original form. The reflection of these traditional Kobudo katas is evident in modern Karate kata.

Over time, Okinawan Kobudo has developed six different katas. These are: Kumi Bo, Kama Bo kumite, Tonfa Bo kumite, a Sai Bo kumite kata, and Ekku Bo kumite. These katas consist of a series of attacking and blocking movements derived from the “classical kata.” The Okinawan kobudō reached its peak, but a decline occurred in the study of kobujutsu.

Now, after having all the information about Kobudo, let’s take a look at its weapons. Okinawan Kobudō has some deadly but fascinating weapons. Here is a list of some of the Okinawan weapons you should know.

The Bo is one of the main weapons used in the old martial way of Okinawa, having about 5 to 6 feet long wooden staff. It is the oldest traditional weapon known to a man, but surprisingly, it wasn’t considered a weapon.

Bo allows you to make a strong and long attack to sweep your opponent’s legs and provide you with better defense.

The Hando is similar to Bo. It is a medium-length wooden staff approximately 3 feet long, capable of causing serious damage when exercised by an expert. Its handling is slightly different from Bo, but its well-placed speedy strike can quickly make your opponent take a pratfall on the ground.

Sai is another well-known Okinawan’s martial arts weapons. It’s a short-length weapon with a handle that extends into three points like a sort of candelabra. This weapon is highly specialized to block and strike your skilled opponent.

Tonfa is a short wooden stick with a handle, generally used in Kobudo training. It’s considered a dual weapon that helps you block and punch for close combat. Also, when held in another way, you can hook your opponent in longer-range combat.

Tambo is one of the shortest Okinawan stick weapons, best for close-quarter combat. This 18 inches long weapon allows you to block and strike your opponent swiftly and accurately because of its smaller size.

Nunchaku, commonly known as nunchucks, is one of the most known weapons used in karate weapons training. It generally has two small, equal-sized batons that are connected via rope or chain. Its batons aren’t sharp but can be deadly in one-to-one combat. Handle with care because you might hit yourself while practicing nunchucks.

The Sansetsukon, an Okinawan weapon similar to Nunchaku but contains three batons instead of two, connected with a chain or rope. You can hold the centered baton in hand and the other two for striking. However, this weapon is tough to handle. But, when handled by some skilled practitioner, the Sansetsukon is very effective and handy.

Be consistent with training – Consistency is the key. If you want to improve your Kobudo, you need to be consistent. Try to train at the same time and days to build a routine. Do it the same every time and perform to the best of your abilities.

Respecting the limits of your body – Pushing yourself during training will help you improve your fitness-level quickly, and you will be able to practice the techniques efficiently. But, push your body to a certain limit to avoid any physical harm.

Play with your techniques outside training – To be a pro at Kobudo, you need to be creative. Practice the Kobudo techniques in every possible way and repeat them. It will make you develop new techniques, and practicing them will make you an expert. Moreover, practice with the esoteric weapons so that you can excel in Kobudo.

Okinawan Kobudo has been a prominent weapon-based martial art for centuries. It didn’t become as popular as Karate, but it has its own reputation.

Okinawan Kobudo is a hard-learned art. But if you are consistent and choose the right weapons to train, you will have fun and learn swiftly. Also, following the guide in this article will help you to learn this complex martial art.

If you are fond of Karate or any other form of martial arts, visit our site now! Because there, we’ve articulated valuable content for passionate martial art fans, just like you.