What Is a Sai? All You Need to Know About Sai Weapon 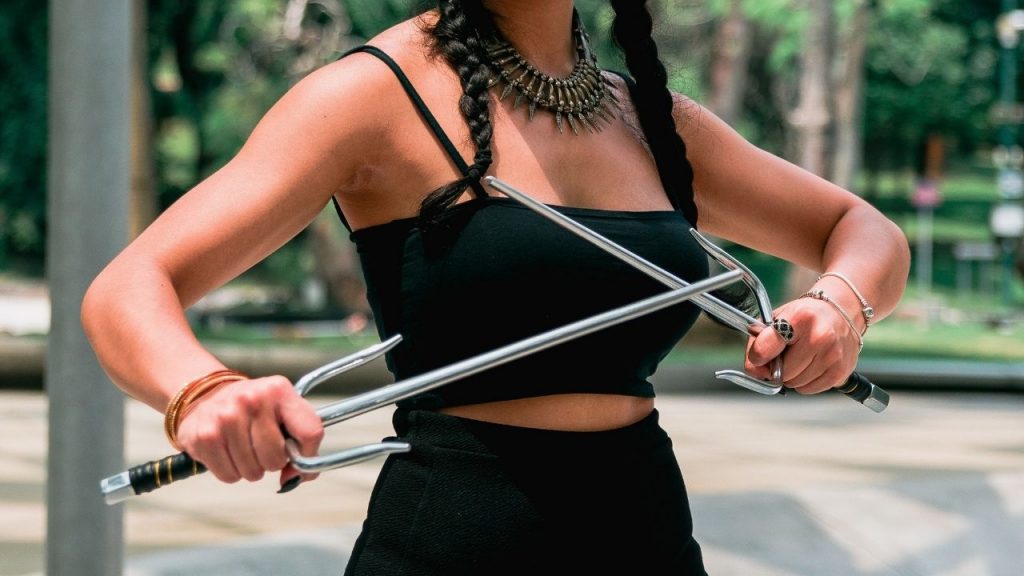 Have you ever seen a ninja movie? Then you’ve seen a sai, though you may not have known what it was called.

The sai (釵, lit. which means “Hairpin” in Japanese) looks something like a cross between a trident and a dagger. The three-pronged weapon is commonly used in Ninjutsu and Kobudo, the Okinawan martial art that involves weapons.

Ever wondered about what is a sai? How do martial artists use the sai weapon? And is it hard to learn to use them? Let’s find out!

The History of Sai Weapon

The exact beginning of the sai, as with so many things in martial arts, is somewhat hard to pin down. The only thing that is for sure is that the idea didn’t originally develop in Okinawa. This, despite the fact that in modern times we see them as Japanese sai linked with ninjas and Karate.

However, the sai in various forms (and known by different names) was used throughout Asia before it arrived in Okinawa. The sai appeared in several countries including India, Indonesia, Malaysia, China, Vietnam, and Thailand.

It’s likely that the original sai was an Indian weapon called a trisula. This short-handled weapon could be used as-is or placed on the end of a staff and used as a trident.

In fact, It is likely that the idea for the trisula came from the trident. In India, the Hindu god Shiva was depicted carrying a trident in many paintings, sculptures, and other artworks.

It is also thought that the trisula may have been an important Hindu-Buddist symbol. This would explain the increasing popularity of the sai as Hinduism and Buddhism spread throughout Asia.

On Okinawa, it’s likely that the sai became popular because the king outlawed commoners from carrying weapons. The sai look very similar to a tool that was used to plant rice, which as you might imagine was used by many Okinawan farmers.

They were also easier to conceal than a long weapon like a sword, yet worked well when defending against one. This made them an effective weapon for the peasants of Okinawa.

Later on, the sai became popular among the police in Okinawa. They enjoyed the weapon’s versatility and use the sai for crowd control and collaring criminals.

Parts of the Sai Weapon

The sai is highly distinctive and once you know what it is, you will always recognize it. Each sai is made up of several distinct parts and there is only a little variation from weapon to weapon.

The sai is typically made of metal and most modern versions come in either chrome or black.

How to Use Sai Weapon?

Sai fighting is typically done in pairs. Twin sai can be used effectively both as an offensive and defensive weapon. They have blunt points and are not sharp like a dagger, but nonetheless can be used for stabbing, bludgeoning, and striking. The sai can also be used for defense.

Sai techniques can be lethal or non-lethal, depending on how the weapon is used. Plus, the various ways you can hold the sai make it a versatile weapon.

For example, you can hold the sai as you would hold a dagger, making stabbing and bludgeoning motions.

You can also flip it around and use the butt end to augment the power of your punch. This position also allows you to use the sai defensively as the longest prong extends along the forearm.

But what are the two prongs used for? They help the user to flip the sai around to change directions without using their other hand. Plus, a common move you’ll see in ninja movies is to entrap the blade of the opponent’s sword and disarm them with a twisting motion.

As you might imagine, it takes quite a bit of training to learn to properly use sai, especially when wielding twin sai as it is designed to be used.

The sai that we know today are typically Okinawan. However, there were a few other styles of sai used in other countries hundreds of years ago.

The Indonesian/Southeast Asian version was known as the chabang or tjabang. The Indian version, as we mentioned, was called the trisula.

Though there was some variation in style, all the sai and similar Asian weapons had the same three-pronged form. Some sai have the two smaller prongs curving outwards whereas others had them curving inward to facilitate entrapping the opponent’s sword.

The only major variation is that some sai have one of the side prongs pointing backward. This variation is called manji and somewhat resembles a swastika.

Sai come in various sizes to accommodate the varying lengths of people’s arms. To properly fit your sai, measure from the end of your extended index finger to the point of your elbow. Add ½” – 1” extra to allow for full protection of your elbow and tricep when blocking.

Is a Sai a Dagger?

The sai is not a dagger, strictly speaking. Though the sai can be used in a stabbing motion, most sai are made with a blunt point.

However, it is possible to find sai with a sharpened tip and even a cutting edge.

Did Ninja Use Sai?

While sai are traditionally an Okinawan weapon, they have moved into ninjutsu. Plus, Raphael from Teenage Mutant Ninja Turtles would emphatically state that ninjas use sai weapon!

They certainly fit the bill as a weapon that was easier to hide than a sword or staff. Yet they could still mount an effective defense against these long-range weapons.

Sai are not listed on all lists of ninja weapons, but they certainly have their place in ninja history. At least as far as ninja movies go.

I’ll admit, it was hard to find legitimate information on whether sai are legal or not. In general, you can own and transport sai with you to the dojo and back.

However, it probably wouldn’t be a good idea to walk around with them on the street. You might have a hard time coming up with a legitimate, believable reason for doing so.

It also depends on your area. Some places may consider sai a type of dirk or dagger which can be grounds for a misdemeanor or felony. Other places may classify them differently.

Call your local police station for the most accurate information.

One of the big tenets of Karate is that it is a weaponless art. The word Karate itself means “empty hand” in Japanese. In other words, you probably won’t learn to use sai swords in a typical Karate class.

However, the Okinawan art of Kobudo is often grouped in with Karate studies. This is where you can learn to use the Karate sai.

How to Wield the Sai?

Are you interested in trying your hand at this prestigious Asian weapon? They are far more difficult to wield than they seem when watching those ninjas jump around on TV.

It takes many hours of intense practice just to effectively use one sai. Then, you face another challenge to get the technique down for using twin sai as traditional sai fighting calls for two weapons.

However, the physical and coordination benefits you get from training are invaluable.

Interested in learning about other Okinawans weapons that are sometimes used in Karate? Check out our post on karate weapons here!