14 Basic Karate Stances Help You Build a Strong Base 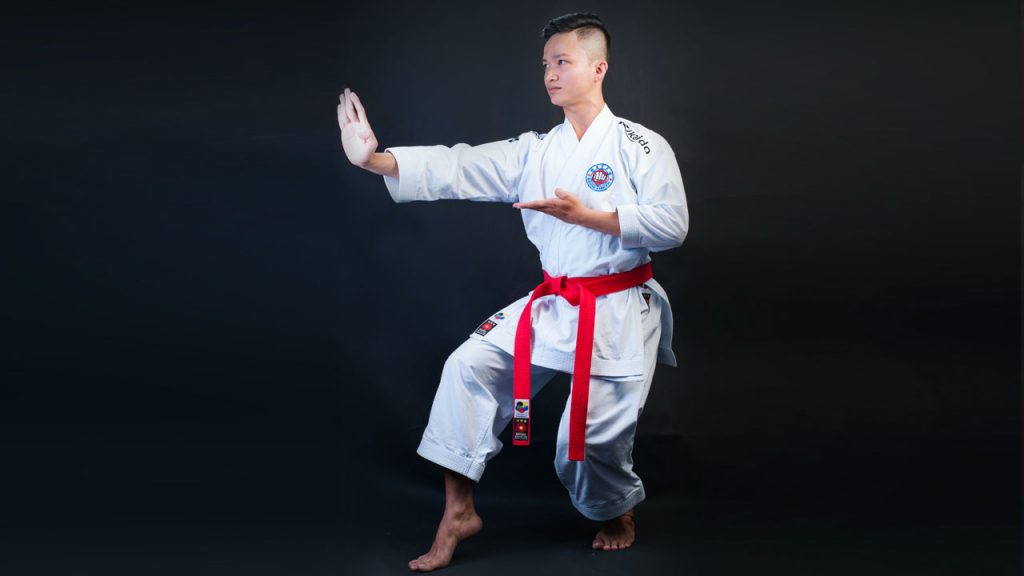 What do you do before you throw a kick?

You prepare your Karate stance.

Even if you don’t know a thing about Karate, you instinctively know that if you just throw your foot up in the air, you’ll end up on the ground. At the very least, you’ll be struggling to maintain your balance. On top of that, your kick will be sloppy and ineffective and you’ll be leaving yourself open to attack.

Just as a building requires a firm foundation to maintain itself through earthquakes and tempestuous weather, a martial artist needs a solid base from which to launch their powerful attacks and defend themselves.

As you’ll soon see, there is no one right way to firmly position your body. It will depend on the technique you want to use and the context. However, all Karate stances will offer you some type of advantage and, when properly executed, will help take your martial arts prowess to the next level.

The Basics About Karate Stances

Every Karate stance serves a purpose, whether it be in preparation for a technique or maintaining a posture of respect. The basic Karate stances are similar, though there are slight differences between styles, particularly in the Karate stances name. In this article, we’ll talk about Shotokan stances and names.

Regardless of what they are called and how they are performed, there are a few basic attributes common to all Karate stances.

First, never stand with your legs straight. Every stance is designed to provide some combination of mobility and stability. Each individual stance will usually focus on one more than the other, but neither of these attributes can be attained with straight knees.

Secondly, posture is important. Keep your shoulders back and your back straight. Your head should be up and you should be alert, keeping your eyes on your opponent as well as being aware of your surroundings.

For a few more tips on how to maintain a solid karate stance, check out this video from Karate Dojo waKu.

Now let’s look at 14 most common basic karate stances. (Who knew there were so many ways to stand!)

First things first, Japanese culture is all about respect and honor. Karate borrows heavily from this and there are certain things, like bowing, that must be done correctly and at the appropriate time to show deference to the Sensei and respect toward other students.

Thus, the first stance we’ll talk about is not a karate fighting stance, but rather a respectful position. It is the formal and polite way of sitting on the floor in Japan and is often used in classes while the instructor is explaining a technique or giving announcements.

To perform the stance, simply kneel on the floor, resting your buttocks on your feet. Keep the back and neck straight for good posture. This is also the starting position for the formal floor bow (zarei).

Perform the standing stance by placing your heels together and turning your toes out to 45 degrees. Maintain a straight back and push your shoulders back. The hands rest with an open palm on your outer thigh.

It is from this position that martial artists will perform the formal standing bow to show respect to their instructor and other students.

This stance is almost the same as the standing stance, but with two exceptions. Instead of turning the toes out to 45 degrees, point your feet straight forward with the heels and toes together. Instead of having your hands open at your sides, make fists and hold them out a few inches.

This is a basic Karate ready stance used in some katas.

Building from the ready stance, the parallel stance is similar. Take the same position with your arms and hands. Now, instead of having your feet together, open them to about shoulder-width apart, toes still pointing forward.

This stance typically follows the formal bow. Often, students will maintain this stance while listening to instructions.

The front stance is a long, deep stance. Create the stance by starting with the feet shoulder-width apart. Take one big step forward and bend the front knee. Keep the back leg straight and point all your toes to the front.

As you might imagine, this stance is heavy on stability and light on mobility. It is primarily used in kata and as a conditioning stance to strengthen glutes, thighs, and hips.

However, it can also be used to reach an opponent who is just out of range or add power to a blow. Imagine the devastation of a Karate punch when the entire body is falling into a deep front stance and that momentum is driving through the fist.

This Karate fighting stance is a shortened version of the front stance. Instead of taking a long step to the front from a parallel stance, take a short one, perhaps just slightly longer than taking a natural step. Your feet should end up about shoulder-width apart.

This is your basic karate fighting stance. It offers a certain amount of both stability and mobility and is the most oft used stance in self-defense and sparring.

This stance is also sometimes known as a neutral stance because it is easy to shift into other stances from this position. For example, you can easily thrust your body forward with a powerful blow into a front stance or retreat back into a defensive cat or back stance at a moment’s notice.

Many stances are to facilitate a devastating attack. However, others such as the back stance, are designed to help you defend yourself and evade blows from your opponent.

To get into it, turn your back foot out to the side. It doesn’t have to turn the full 90 degrees, somewhere between 45 and 90 is good. Bend your knee and draw your front foot towards your body to a little over shoulder-width apart, resting your foot lightly on the floor.

Horse stance is a very versatile stance that has many uses in Karate.

First, it is an excellent conditioning stance for strengthening the legs, hips, and even the core to some extent. Every Karate student has performed endless punching drills at some point in a low horse stance. Some instructors will require students to hold the stance low enough to place a staff across their legs without it falling off.

Second, it is a very strong stance for defending against side attacks.

To perform the karate horse stance:

Some schools/styles of Karate prefer not to use the horse stance, opting for the sumo stance instead. However, it can be confusing sometimes because they’ll often refer to the sumo stance as a horse stance. In schools where both are used, they keep their own separate names.

The sumo stance is basically the same as a horse stance, with one exception — the feet are pointed about 45 degrees outward. This makes the stance easier to maintain but fundamentally the same, which is why some schools prefer it.

As the name implies, the immovable stance leans heavily to the stability side. The easiest way to describe it is as a combination of the front stance and horse stance.

The front foot points inward at a 45-degree angle with a deep bend in the knee. Instead of keeping the back leg and toes straight, bend the knee slightly and turn the toes out at a 45-degree angle. The distance between the feet is approximately two shoulder widths apart.

This stance is good for defending against blows. Turning the legs in slightly helps protect the inner thighs and groin from low kicks and makes it harder for your opponent to knock you down. However, the trade-off is good mobility, and it’s difficult to move quickly into another move from this stance.

Though not widely used, the cat stance is one of the best karate positions to use for sparring and self-defense. By drawing your weight back, you’re putting yourself in a solid defensible position and you can make quick, yet devastating attacks with the front leg. With most of your weight on one leg, you’re also able to change directions quickly and move sideways to avoid attacks.

To get into the stance, place your back foot at a 45-degree angle. Keep the toes of your front foot pointing straight forward and draw it back towards your body for a distance between your feet of no greater than one shoulder-width apart. About 90% of your weight should rest on your back foot. Only the toes and ball of the front foot should be lightly touching the ground and supporting only about 10% of your weight.

If you’ve ever seen the original version of The Karate Kid, you’ve seen a crane stance. Near the end of the movie, he famously executes the crane stance after his knee is injured and right before delivering the final devastating blow to his opponent.

The crane stance is not so much a stance as it is a transition between one Karate position to another. It’s good for defense and preparing new attacks against your opponent.

To get into the stance, simply stand with your feet turned 45 degrees outward. Raise one knee up until you can get your ankle behind the knee of the supporting leg. As always, make sure there is a soft bend in the knee of the leg you’re standing on.

The cross stance is another very useful stance for transitioning from one technique to another. You don’t want to linger too long in the cross stance, it’s too easy for your feet to get tangled up with one another and you end up on the floor.

Regardless, when you’re landing from a jump, moving sideways to evade an attack, or turning, the cross stance is a helpful Karate pose to have in your arsenal.

To execute the pose, root your front foot on the floor with the toes pointing forward and bend the knee. The back leg crosses behind with only the toes and ball of the foot on the ground and the knee nestled against the back of the supporting leg.

This Karate stance looks a little awkward to an observer and is difficult to perform. However, it is excellent for defense as the angle of the legs helps to protect the vulnerable inner thighs and groin.

To assume the pose:

This is what helps to protect the groin and inner thigh.

Basic Karate Stances and Beyond!

Whew! We talked about a lot of Karate positions and mentioned a little about how they are used. Remember, when sparring or fighting in self-defense, you won’t be holding any of these stances for much longer than a split second.

The only time you’ll be holding these stances for any length of time is during katas and training. Slow conditioning practice serves two purposes. One, it strengthens the muscles required to perform and hold the stance (which helps make you stronger overall). Two, it creates muscle memory in the body to help you avoid standing incorrectly during a fight, which can mean you end up on the ground in a vulnerable position.

We hope this information has been helpful to you in your Karate quest! Try practicing some of the different karate stances and check out our incredible tips to help you improve your Karate faster today!