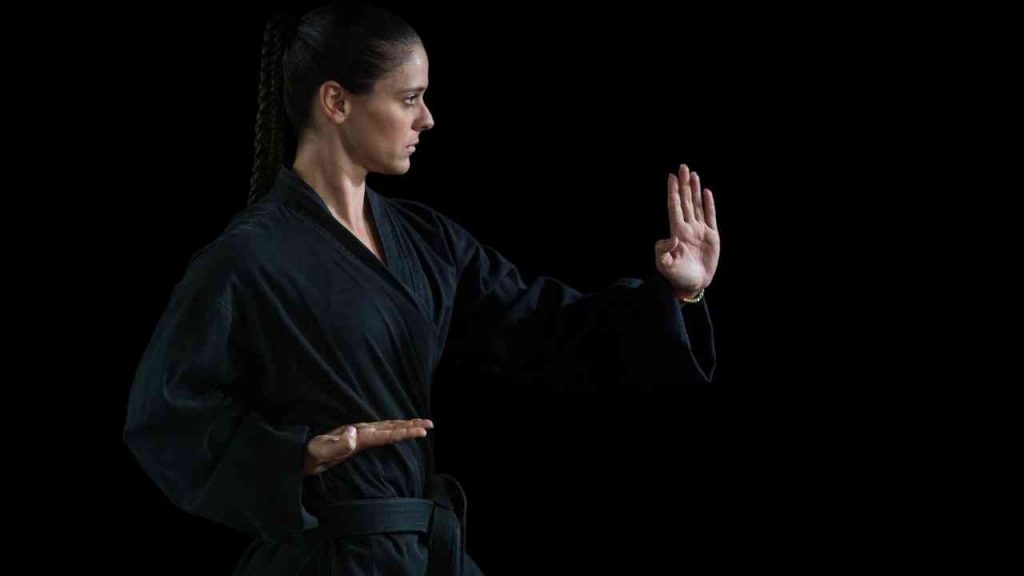 Probably amongst the most unique of the different forms of Karate, Goju-Ryu is the only one that has remained closest to its original roots. While other forms of Karate have bifurcated with the passage of time, Goju Ryu karate has been able to preserve its essence.

Wondering what Goju Ryu karate is all about?

Well, in this blog, I will be taking you through the different nuances of Goju-Ryu karate by tracing its history, katas, belt system and other features. So, without further ado, let’s dive right in!

What is Goju-ryu Karate?

In the word ‘Goju-ryu’, ‘go’ is the notion of the concentrated force or hardness whereas ‘ju’ is the notion of pliability or softness. The term ‘ryu’ which means stream refers to the traditional lineage of the martial art form, passed from teachers to students for generations. That being said, let’s take a look at how this style of Karate came to be!

In 1873, Kanryo Higashionna, a martial arts master, traveled to Fuzhou and began studying under several teachers from China. One of the teachers was Ryu Ryu Ko, master of the art of Whooping Crane Kung Fu. Eventually, in 1882, Higashionna returned to Okinawa and began teaching a new style which was a combination of his knowledge of Okinawan styles and the martial art styles he learned in China.

Chojun Miyagi was one of his best students who began training under him from the age of 14. When Higashionna died, Miyagi continued to train his other students. Like his master, Miyagi also traveled to China to study martial arts and came back to Japan with much more refined knowledge. Then in 1930, a martial art demonstrator asked Jin’an Shinzato, a student of Miyagi, what kind of martial arts he practiced. He and Miyagi then decided to call it Goju-ryu Karate.

Like other forms of karate, the Goju-ryu also follows a dedicated belt ranking system. Let me assure you that reaching all these levels takes the utmost dedication and determination. Having said that, the belt order followed for Goju-ryu Karate is mentioned in the table below.

‘Kata’ is a Japanese word meaning ‘form’. Kata is a series of standardized movements or forms which are followed in all forms of karate to practice offensive and defensive techniques. Goju-ryu Karate has 12 main katas listed below.

Some punches and hand strikes used in Goju-ryu Karate are as follows:

Some well-known and often used kicks in Goju-ryu Karate have been mentioned below:

Goju-ryu Karate follows ten basic stances. Let’s a take a look at each stance and what it means below:

Is Goju-ryu Karate effective for self-defense in a real fight?

If taught properly, all Karate styles are an effective form of self-defense. Similarly, Goju-ryu Karate style was designed as a form of personal protection and self-defense, not for sport fighting. Some of the defining features of Goju-ryu Karate are precise flowing movements, sharp and hand punches and kicks, a strong focus on breathing techniques, and harmony between mind and body.

If practiced regularly, these features will allow an individual to take down even a bigger and stronger opponent. The idea is not to invest a lot of physical strength but rather indulge in movements with precision and dexterity. These karate styles are, hence, useful across all ages, gender, and physical capabilities.

Additionally, knowing that you possess the ability to protect yourself and friends and family in dangerous situations gives you immense confidence. This courage will strengthen your personality and make you a better person.

You can refer to these books below in order to build a detailed knowledge about Goju-Ryu karate:

In order to master any art, it is imperative to have a comprehensive knowledge of the same. Goju-ryu karate needs dedication, willpower, and constant commitment. Therefore, you must try to build up as much knowledge as you can. For more such articles on everything Karate, feel free to check out my other articles.