Taekwondo Vs Karate: Which Style Wins? 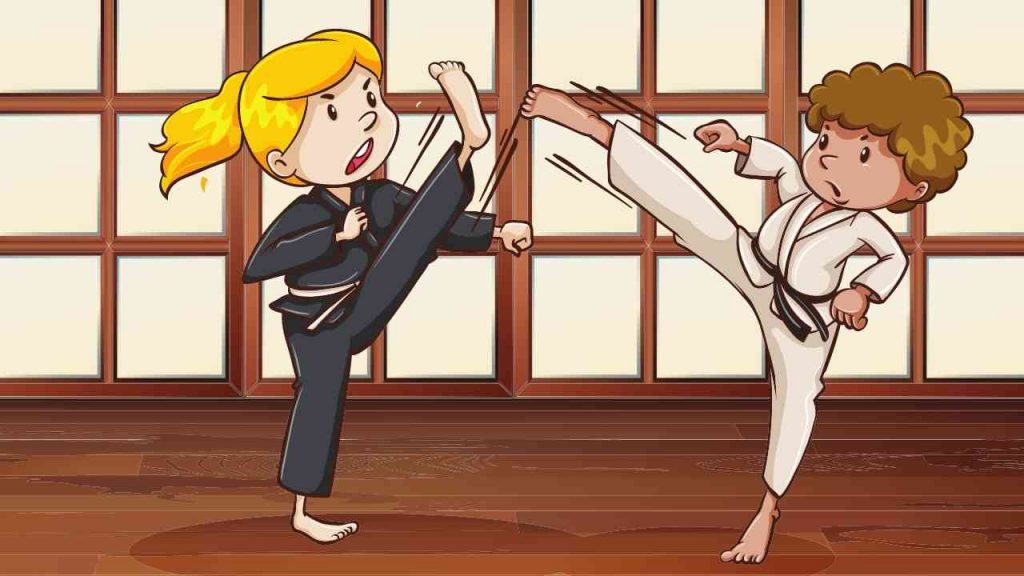 Kung! Pow! Kick! Learning martial arts is excellent not only for your physical and mental health but also to learn how to defend yourself.

Taekwondo and Karate are two of the most popular martial arts styles. Each year thousands of people begin a life-changing journey when they walk into a school teaching either of these disciplines.

But what’s the difference between Karate and Taekwondo? Is Taekwondo the same as Karate, just from different parts of the world? Is one better than the other? Which style would suit you best?

What’s the Difference Between Karate and Taekwondo?

To the untrained eye, a Karate and a Taekwondo demonstration might seem very similar. Both styles involve mostly linear movements (as opposed to circular such as in Kung Fu).

Using similar kicks and hand techniques, the practitioner will do their best to stop their opponent. However, Karate places more emphasis on hand techniques, whereas Taekwondo focuses more on the feet.

The philosophies of the two arts are somewhat similar. Both styles teach discipline and that martial arts is a way of life, not a means to an end. Students of these arts are taught not to be the aggressor. However, they are more than capable of defending themselves should the need arise.

Though there are many similarities, there are also many differences between Karate and Taekwondo.

Let’s break it down.

Karate was developed on the Japanese island of Okinawa until Gichin Funakoshi brought it to the rest of Japan and the world. Though it wasn’t officially recognized, or even called Karate, until the mid-1930s) its history spans centuries.

Karate has roots in both Japanese and Chinese fighting styles. Okinawa was an important location on the trade route and had dealings with both China and Japan, even during times of war-torn upheaval between the two countries.

However, the first hints of Karate are generally attributed to an Indian monk in the 5th century. Bodhidharma taught systemized exercises for the purpose of helping some sickly monks strengthen both mind and body.

Since Karate became popular in the US and around the world after World War II, various substyles have branched off. The World Karate Federation oversees competitions and works to unify the sport.

Taekwondo also has a history spanning several hundred years. Records exist showing that a form of this combat technique existed as early as 50 B.C.E.

It existed and continued to evolve in Korea for several centuries. Then in the early 1900s, Japan invaded and occupied Korea. The Japanese tried to stamp out the Korean martial art, but many people continued to practice in secret.

After the Japanese occupation ended in 1945, the Koreans wasted no time in founding Kwan, the first Taekwondo school. Modern Taekwondo is overseen by the World Taekwondo Foundation.

Both arts are now recognized as Olympic sports. Taekwondo was included back in 2000 and Karate made its debut at the 2020 Olympic Games in Tokyo.

Both styles use sparring as a training tool as well as in competition. The rules are different between the two styles.

Karate tends to encourage students to “pull” their punches and focuses more on technique and form. Techniques must be executed correctly in order to earn a point.

As we’ve mentioned briefly, Karate emphasizes more hand techniques. Students learn kicks and other leg techniques, but they take a backseat to the hands.

In contrast, Taekwondo focuses more on the feet. The legs are seen as superior weapons because of their greater reach and strength. Many of the same hand techniques are taught but are used as a backup or complement to the foot techniques.

The basics of Karate are divided into three parts, Kihon, Kata, and Kumite. Kata are choreographed sets of moves that students practice to develop their technique. They also serve as a sort of library of techniques.

Kihon are the building blocks of the techniques. Kumite is a complicated system of sparring with various levels from one-step moves on up to freestyle sparring.

Kata exist in Taekwondo, as well as sparring, but the application is a little different. Full-contact sparring is allowed and encouraged, which is not the case in most forms of Karate.

Students for both arts wear similar white uniforms for training. There are slight style differences, but both are loose-fighting and appropriate for training.

Additionally, both styles use colored belts to mark the student’s progress as they move through the ranks. However, the colors vary and Karate also uses stripes.

Protective gear like mouthguards and shin guards is similar in both arts. However, Taekwondo practitioners are more likely to use chest protectors and other full-body gear because full contact is allowed in sparring.

Both arts use a series of colored belts to mark the journey from white belt (beginner) to black. The colors are different but both have 10 degrees of pre-black belt levels. Karate has 10 degrees of Black Belt and Taekwondo has 9.

Taekwondo vs Karate: Which is Better for Self-Defense?

Few people can give you an unbiased answer to this question. Those who lean toward Karate will say that Karate works better on the street. The idea is that because Karate focuses on hand techniques, which are easier to learn, you can be better prepared for a street fight in less time.

Those who lean toward Taekwondo will say the opposite. It requires greater balance and skill to execute a foot technique but the power you can generate is superior to hand techniques. One well-placed kick can give you plenty of time to get away.

When it comes down to it, you choose the sport that interests you more or that is easier to access. Both will provide you with self-defense skills.

Who Would Win? Taekwondo vs Karateka

Again, you’ll get different opinions on this depending on who you ask. However, knowing which style is inherently better is virtually impossible.

In a fight, two styles aren’t going up against one another, two fighters are. It all boils down to the skill of the individual fighter and how well they know their stuff.

But, you know, if you’re asking us, we’re rooting for the Karateka!

Karate vs Taekwondo: Who Wins for Physical Fitness?

Both styles (all styles) of martial arts are an excellent way to get good exercise. They do have slightly different focuses, which may make one style better for you depending on your fitness goals.

For example, Karate focuses more on power and strength. While power and strength are important in Taekwondo too, there is more of an emphasis on flexibility and agility. You can’t be swinging those kicks around if you aren’t flexible or good at staying on your feet.

Check out this amazing video full of insane Taekwondo skills!

Tae Kwon Do vs Karate: The Best Sport for You

What do you think for yourself? Is Taekwondo better than Karate? Maybe you prefer learning those flashy kicks. Or maybe you’d prefer to stay more grounded and focus on building your strength.

When comparing martial arts, it’s important to remember that one style isn’t inherently better than the other (in general). Each has its pluses and minuses and it’s all about finding what works best for you.

The most important thing is just getting out there and doing it. Check out this list of Karate blocks to dig deeper!