What Is Karate? Karate Origin and Colorful History 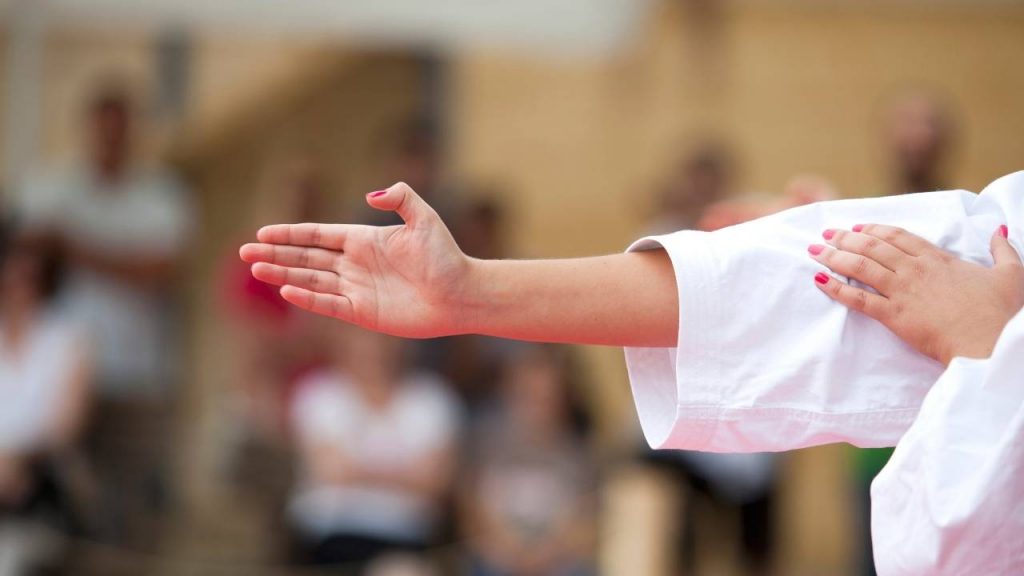 What is Karate? Where did Karate come from? The history of Karate is quite interesting. It teaches us that even oppressed people can have an impact on the rest of the world for generations.

Interested to learn more about Karate origin? Read on!

Karate is a hard style of Japanese martial arts. This means that the movements are sharp and crisp as opposed to the circular “soft” movements of martial arts like Kung Fu. (Though being struck by a Kung Fu martial artist is anything but soft.)

But there is far more to Karate than just the physical. It is also a mindset, a way of life. Spirit, tactics, and timing are each equally as important as physical prowess. If you’ve ever watched a Karate competition or class, you’ll see focused faces with determined looks. You’ll also hear them yell sharply when striking, letting their inner power spill out and pour into the target.

Karate, which means “empty hand” in Japanese, is largely practiced without weapons. As we’ll see in a minute, the style was probably developed by poor peasants looking for a way to defend themselves. Their Samurai overlords most certainly would not allow them to carry weapons, though the use of some weapons has crept in over the years.

With roots in East Asia and Japan, modern Karate is now practiced all over the world. Karate tournaments incorporate two distinct types of competition — Kata and Kumite.

Katas are a predesigned set of movements that were largely used as a way to pass down knowledge before there were video cameras. You can think of katas as a living library of techniques.

However, they are far more than just an archive. In competition, katas are performed with an unrivaled intensity you won’t see in other sports. The fighting spirit of the individual is just as important as performing flawless techniques.

Kumite, or sparring, is a way to develop combat skills. However, unlike MMA where fights can sometimes turn brutal, Kumite is a bit more civilized. Contestants are encouraged to “pull” their punches and matches are judged based on skill and technique.

Dangerous movements are prohibited and contestants penalized if they accidentally execute an illegal move.

Sometimes traditional Karate is criticized for having this policy. The argument is that contestants are practicing for defeat on the street. As an answer to this, full contact styles of Karate have been developed. The most common full contact style is Kyokushin, also known as knockdown Karate or Japanese full contact Karate.

The History of Karate

So, where did karate originate?

Karate has a colorful history. It did not originate in any one place or at any one time. There is no one person that you can point to say “they invented Karate.”

Rather, Karate was slowly developed and its practitioners were influenced by a variety of sources over a period of centuries. Eventually, they created the martial art that we know today.

The majority of this development happened on an island called Okinawa. Here is a short video introducing the basic history of Karate:

The History of Okinawan Karate

The roots of Karate can be traced to the indigenous fighting system used in the Ryukyu Kingdom, which included the modern-day island Okinawa. In 1372, the Ming Dynasty in China established trade relations with the Ryukyu Kingdom.

The Chinese brought with them their own fighting style, Kung Fu, which is largely based on a fighting system that came from Ancient India and was developed in the Shaolin Temple.

The two styles were mixed together and there was little uniformity. Rather it was a bunch of individuals who were each developing their own style of fighting. In 1477, King Shō Shin banned the use of weapons in Okinawa. As the story goes, this fed the interest in martial arts as people were looking for a weaponless way to defend themselves.

Different forms of tang hand evolved in Okinawa, and later the leader of one style, Gichin Funakoshi was invited to the Ministry of Education in Japan to give demonstrations. This led to a surge in popularity and Gichin’s style became known as Shotokan Karate with other styles following to mainland Japan shortly after.

As growing nationalism and anti-Chinese sentiment grew in Japan in advance of the second world war, the name ‘tang hand’ (due to its associations with China) was abandoned and replaced with the name Karate, a Japanese word meaning ‘empty hand’.

Karate continued to evolve, and as popularity spread to the west in the late 1960s and early 1970s as Japanese instructors moved overseas, an increasing sport element developed into the martial art we know today.

An introduction to sport karate can be found here:

The real story of Okinawan Karate has been lost to history. There is a basic framework and timeline as we’ve seen, but it’s not well known exactly who practiced Karate and kept it alive.

For example, some accounts say that peasants and farmers used martial arts to defend themselves when they were prohibited from carrying weapons. The legend goes on to state that many of the modern Okinawan weapons (some of which are used in Karate) were based on farm tools since that was all they had on hand.

Others claim that peasants and farmers would have never had the time or energy to practice martial arts. They were far more worried about the daily tasks of survival.

Another interesting tidbit is that in 1609, the Satsuma clan of Japanese Samurai invaded and were in power in the area for 270 years. They prohibited the Okinawans from practicing martial arts during this period to more easily control the populace.

This is where stories emerge of people practicing at night where they were less likely to be seen. But again, how many peasants and farmers would have had the energy to do this?

Regardless, someone kept the traditions alive and the martial art survived to eventually be formalized in the late 1700s.

The history of Karate is shrouded in mystery, to say the least. There are still plenty of questions about how the art survived. Some might even wonder how similar modern-day Karate is to the original Okinawan martial arts used during the Ryukyu Kingdom.

While we can’t answer all the questions about Karate’s origins, we can answer a few. Here are some answers to frequently asked questions.

Where Was Karate Invented?

Though Karate has roots in Ancient China and even Ancient India, the art was primarily developed on the island of Okinawa. It was brought to Japan in the early 1900s where it was refined into the modern Karate that we see today.

Is Karate Chinese or Japanese?

Modern Karate is solidly Japanese. After being brought from Okinawa, the martial arts style was further refined and developed in Japan. Japanese culture is now firmly ingrained in the philosophy and mindset that is taught to Karate students.

However, you would be forgiven for wondering if Karate is Chinese. The Okinawan art that developed into Karate was heavily mixed with Chinese martial arts or Kung Fu. While Kung Fu and Karate today look vastly different, it is interesting to note that one had such an influence on the other.

There isn’t any single person who can be credited with the invention of Karate. However, Gichin Funakoshi is known as the Father of Modern Karate. He was the founder of Shotokan Karate (one of the most popular styles of Karate) and is responsible for bringing Karate to Japan.

How Old Is Karate?

Officially, Karate is less than 100 years old. The name “Karate” was chosen for the art in 1936 when Gichin Funakoshi brought the art to Japan. Of course, as we’ve discussed here, the roots of Karate stretch back for hundreds of years even though the name is so young.

Rest assured that you are joining a long history of martial arts tradition when you put on your Karate gi and tie your belt.

When Was Karate Invented?

It’s hard to put an exact date on the invention of Karate. As we’ve discussed here, Karate developed over a period of centuries. However, if you want to put a date on it, Karate got its modern name in 1936. Then, in 1939, Japan opened its first official Karate training school Shoto-Kan.

Is Karate From Kung Fu?

Kind of. Karate was developed from Okinawan martial arts, which was heavily influenced by Chinese Kung Fu. Many Chinese families came to Okinawa because of strong trade ties and brought Kung Fu with them.

In simplistic terms, you can say that Karate is a fusion of Kung Fu and Okinawan martial arts with some Japanese flair.

We hope you have appreciated learning this information about Karate’s origin. As you can see, the art has a long and colorful history. While all the details are not specifically known, you can still be proud of the heritage behind the art.

Many Karate students and masters before you have proudly worn their belts, joining a long line of honorable people throughout history.

Ready to deepen your knowledge of Karate? Check out these basic Karate stances to take your opponent down hard!