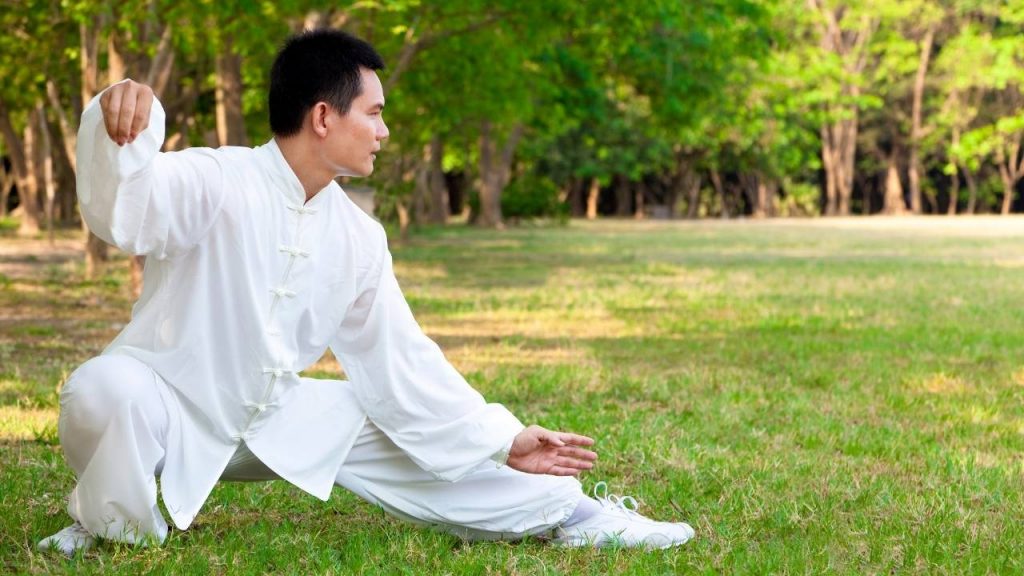 What comes most readily to mind when you hear these words? Do you picture a determined warrior fluidly battling a giant bear atop a lonely mountain top? Or maybe you see a lovable panda named Po realizing his dreams of becoming the Dragon Warrior.

Regardless, the essence of Kung Fu is far more profound and complex than either of those ideas. Let’s look at Kung Fu’s origin to learn more about this incredible, ancient martial art.

What is Kung Fu?

It might surprise you to know that the term Kung Fu does not strictly refer to martial arts. In China, it can be used for anything that requires study, patience, energy, and time to learn. However, in general, outside of China, Kung Fu refers to a type of Chinese martial arts.

As an umbrella term, kung fu describes a range of distinct styles which used to be characterized by animal movements.  This now includes styles ranging from Shaolin Kung Fu and Wing Chun to the softer styles of Wushu and Tai Chi Chuan.

Shaolin Kung Fu (also called Shaolin Wushu) is kind of the originator style going back centuries. It is generally accepted that Kung Fu was developed and refined at the Shaolin Temple throughout its 1500 year history.

However, it’s possible, more likely probable, that much of Shaolin Kung Fu was based on Chinese styles of martial arts going back much further.

Now, traditional Kung Fu practitioners focus on learning fluid, circular techniques and movements. They are designed as much for self-defense as they are for keeping the body fit and healthy.

Ask a Shaolin master of Kung Fu and a Karate master to perform next to each other and you’ll see many similar movements. However, the movements of the Kung Fu master will be much more fluid as he moves from one technique to the next with little pause.

On the other hand, the Karate master will have short movements with distinct stops and pauses between one technique and the next.

Kung Fu was founded on a system of leg, arm, and trunk exercises incorporated with meditation which developed significant strength in physical and spiritual efforts in the monks that practiced the art.

Shrouded in legend around how they developed, a key characteristic of kung fu is the styles associated with it based on distinctive animal movements.  The most well-known of these include monkey, tiger, crane, and praying mantis styles.

More recently in the 20th century, Wing Chun became prominent as the favorite of the legendary Bruce Lee prior to developing his own art in jeet kune do.

As the story goes, Wing Chun was developed by a nun to help her charges defend themselves. This emphasized the economy of movement and directness in attack and defense.

Because this didn’t rely on powerful arms and body, this was perfectly suited to women at the time and continues to be a popular and prominent martial art today for both men and women.  (Source: Martial Arts Of The Orient book by Bryn Williams)

Its explosion in popularity across the world since the 1960s and 1970s – due in no small part to the popularity of Bruce Lee and his films. This paved the way for martial arts in popular culture and made kung fu much more accessible.

Where does Kung Fu come from? Kung Fu is really old. So old, in fact, that its origins are shrouded in mystery and conjecture. Kung Fu is typically thought of as Chinese martial arts. However, there is some evidence that it came from (or at least is heavily based on) a martial art that was developed in India.

Who created Kung Fu? Some historical documents credit Bodhidharma, a Buddhist monk, with bringing his brand of martial arts from India to China and establishing Kung Fu in the Shaolin Temple.

Records about Bodhidharma have been called into question and very much debated. There isn’t strong historical proof that the stories about him are true. Plus, there are some stories that are just too fantastical to believe.

For example, it’s said that when Bodhidharma first arrived, the monks did not welcome him to the monastery. Upon his rejection, he meditated for nine years in a nearby cave until the monks recognized his tremendous religious dedication.

It doesn’t sound too fantastical until you learn that he supposedly bored a hole in the cave wall with his intense gaze for all those years.

Needless to say, there are some things that have simply been lost to history. The more you dig into the history of Chinese martial arts, the more confusing it gets.

However, the idea that Kung Fu originated and was developed at the Shaolin Temple is generally regarded as true.

The Shaolin Temple was built in 495 AD. It is located in the Song Mountains in the Henan Province of China.

Even before the Shaolin Temple, it was common for monks in Ancient China to have at least some degree of martial arts training. Chinese monasteries tended to be estates with considerable land holdings and a regular income. As such, they needed protection from bandits and other unscrupulous folks.

At the Shaolin Temple, it is believed that some of the original monks may have been in the military before becoming monks. Plus, the Chinese Buddhist canon talks about a monk named Sengchou’s prowess with a tin staff.

Bodhidharma and the Shaolin Monks

Bodhidharma arrived in 527 AD. At that time, the monks in the Shaolin Temple didn’t necessarily learn the art for self-defense. Rather, the monks were sickly and weak and Bodhidharma’s training regime supposedly helped them improve their health. The transition was so drastic that his teachings gained much renown as a path to a healthier lifestyle.

This remains true to this day. Many people practice Kung Fu as a way to stay physically fit and healthy. For them, the self-defense part of their training is an unnecessary but welcome bonus.

The History of Kung Fu and the Five Animals

One of the theories that call Bodhidharma into question as the origin of Kung Fu has to do with a Chinese physician named Hwa Tuo. He lived centuries before the Shaolin temple was built during the Three Kingdoms period from AD 220-280.

He developed a series of exercises based on five animal movements — tiger, bear, stork, deer, and monkey. Interesting how those are almost all the same animals that appear in Kung Fu Panda. The Furious Five consists of tigress, stork, monkey, viper, and mantis. Plus, the bear appears if you count the panda.

Not likely. The reason why any of this is significant is that many of the movements in Shaolin martial arts and Kung Fu are based on animal movements.

Hence a reason why some people disagree that Bodhidharma developed Kung Fu centuries later at the Shaolin Temple. He may have refined movements and unarguably had an impact on Shaolin Kung Fu history. However, Chinese Kung Fu was being born through the work of this doctor and others long before Bodhidharma walked the earth.

The Shaolin Monks Living the Legacy

The monks even fought in a few skirmishes during the upheavals that came with dynasty changes. However, they were not militarized, nor is there evidence that they trained to become warriors. They simply learned the system as a form of exercise and self-defense if there was a need to protect the monastery.

Due to its growth within the Shaolin monasteries, there is also a philosophical side to kung fu relating to Buddhism and Taoism principles. In the past, kung fu has been characterized as being much more secretive about its training practices.

Regardless, modern Kung Fu practitioners have these monks to thank for keeping Kung Fu alive through the centuries.

Now, you might be wondering, isn’t this the Karate Blog? Why are we talking about Kung Fu?

Traditional Kung Fu from China plays an important part in the development of Karate.

Okinawa is a Japanese island physically located closer to China than the rest of Japan. As such, the Okinawans had close trade relations and ties with China, even during a time when Japan was in conflict with China. In fact, everything Chinese was regarded as really awesome in Okinawa.

Thus, when traditional Chinese martial arts arrived in Okinawa, it caught on quickly. As a primarily weaponless form of defense, it also was very useful to the Okinawans later when Japanese Samurai occupied the island and held the Okinawan peasants under their thumbs.

The Birth of Karate

Though the Okinawan system of fighting was heavily based on Kung Fu, they called it “Toudi” instead, which means “Chinese Hand.” The name was changed to “Empty Hand”, Karate, when it was brought to Japan for fear that the Japanese would reject an art with the word “Chinese” in it.

Over the years, the style had also changed to reflect the fluidity differences we noted earlier. Plus, the Japanese seem to have “streamlined” Karate to fewer techniques than those taught in Kung Fu.

This is the reason that some people are confused and ask “is Kung Fu Chinese or Japanese?” People in the West are generally more acquainted with Karate, which is solidly a Japanese style. But if you do the digging, you’ll find out about its Chinese roots.

Deepening Your Study of Martial Arts

Did you enjoy this peek into Kung Fu origin and its influence on Karate?

Whether you study Karate or Kung Fu doesn’t really matter. What’s important is that you enjoy what you’re learning and doing. You’ll have far more success with a venture that you enjoy. Interested in learning more about other martial arts you could study? Check out what is the world’s most popular martial art?