7 Karate Blocks (UKE) to Stop Your Opponent in Their Tracks 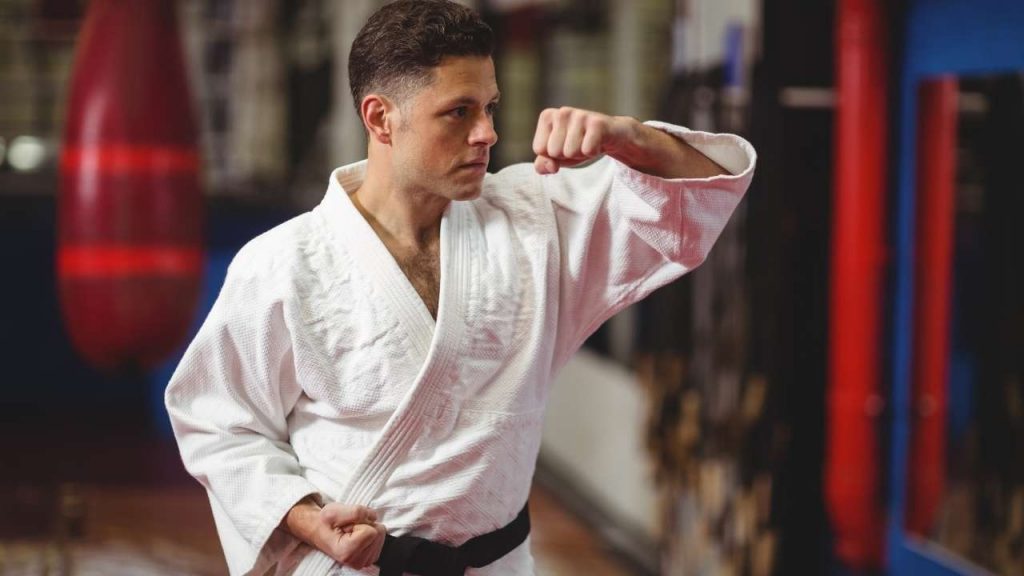 What’s the most important move in Karate?

One could argue that the most important move is whichever one ends the fight. But that wouldn’t be consistent with Karate values.

Master Gichin Funakoshi popularized the saying “Karate ni sente nashi” or “there is no first attack in Karate” in English. Karate is about learning to defend yourself — not becoming an aggressor.

Thus, as you might notice, all Karate Kata begin with a block. The ability to stop an attack, especially when taken by surprise, is the most important move in Karate.

There are three basic attack levels in Karate — Jōdan, Chūdan, and Gedan. In English, we would call them high, middle, and low. Let’s unpack that concept.

Jōdan refers to the upper area of the body. Blocks or attacks going to the head or neck are going to the Jōdan level.

Collectively, blocks for protecting this section of the body are called Jōdan-uke.

Chūdan refers to the middle level, which is defined as from the neck to the belt. Names of attacks to this region are often followed by the word chūdan.

The blocks that are used to counteract attack to this section are called Chūdan-uke. These are the blocks you’ll learn when learning how to block punches.

Gedan refers to the lower level and is defined as the area from the belt to the knees. The Gedan area is considered quite vulnerable (largely because of the presence of the genitals). As such, there are only a few attacks to this area and Karateka are usually discouraged from using them (except in extreme cases of self-defense).

The only arm techniques that are taught for this level are blocks. The word for these types of Karate blocks in Japanese is Gedan-uke.

There are two main types of blocking in Karate, inward and outward. This refers to the direction your arm (or leg) travels to execute the block.

For example, if you bring your left hand to the right, you’re moving in toward the centerline of your body. That’s an inward block.

If you bring your left hand to the left, you’re moving out away from the body. That’s an outward block.

Pretty simple, right? Of course, the different levels at which these basic blocks can be performed make things a little more complicated. Let’s look closer at this Karate block list to better understand them.

Note: it’s a good idea to learn the Karate blocks’ names in Japanese. Many schools will refer to them in Japanese rather than English.

Age Uke is one of the basic rising blocks used to defend against attacks to the Jōdan region (high attacks). The move begins with your forearm perpendicular to your body at the belt level, fist facing upward.

Bring the arm straight up, rotating your fist as you go so that you end with your fist facing away. The pinky side of your forearm should be up to take the blow on the bone. This technique is effective at blocking punches to the face or hammer strikes from above.

Chūdan Soto Uke is an inside middle block. Perform it by raising your left fist up toward your left ear, elbow bent, fist facing forward. Bring it to the right, rotating your hand as you go, so that your fist ends up facing you.

The move is often accompanied by a pivot step backward with the opposite leg. This moves the body out of the line of attack.

Wondering how to deflect a punch? This is a great move right here.

Chūdan Uchi Uke moves in the opposite direction as Chūdan Soto Uke, making it an outward block. The block comes from across the body, protecting against inward attacks.

If you’re using your left arm, the technique begins on the right side of your body, the fist facing inward and the arm extended slightly down. Bring your arm out and to the left, twisting your wrist slightly as you go.

You should end with your fist facing your body and catch the blow with the bone on the thumb side of your forearm. Retract your other hand to a ready position at the same time to generate power.

This is the same basic block as the Uchi Uke, but with the help of your other hand. Perform it with the same movement as the Uchi Uke. At the same time, bring your other fist against the elbow of your blocking hand to reinforce the block. Let your hips generate the power for this block.

This low outward block begins with your fist by the opposite ear, sweeping down to defend against low attacks. This is one of the primary blocks you’ll learn for how to block a kick.

For example, with the left hand you’ll begin by your right ear. Straighten your arm down to finish with your fist a few inches in front of your thigh. Your fist should be facing your body and you take the blow on your pinky side forearm bone.

This cross-block begins with both fists at the hips as if you were preparing for a punch. Instead of punching at your opponent, your punches go downward, crossing your wrists at the end of the technique. Like Gedan Barai, your fists will end up a few inches in front of your thighs.

With the right timing, you can catch your attacker’s fist or foot between your fist, then open and rotate one of your hands to grab it.

As the name suggests, this is the same block as Gedan Juji Uke but going high instead of low. Begin in the same starting position, then send your fists upward, crossing your wrists at the end of the technique.

Blocking kicks isn’t easy, but this technique can be used to stop ax kicks or downward hammer strikes to the head.

The Purpose of Blocks

Now that you understand a few of the basic Shotokan Karate blocks, let’s delve a little more into the purpose of blocking. As we mentioned earlier, Karate is a form of self-defense. Karateka should never be the aggressors but are more than prepared to defend themselves if necessary.

Blocks are excellent techniques for this purpose. In fact, one purpose of a block is to discourage further attack by making a show of strength.

Another way to use martial arts blocks is to parry or redirect the force of the attack. You may also use the technique to unbalance your opponent. Finally, blocks give you a chance to withdraw to safety momentarily to figure out your next move.

General Tips for How to Block

Of course, you can’t just stick your arm out there and expect your opponent’s attack to falter. You’ve got to have excellent technique when it comes to blocking or you could get hurt.

Deflect Rather Than Stop

It’s a lot easier to redirect the attack’s power rather than force it to come to a jarring halt by virtue of your own strength. In other words, push the attacks off course rather than taking the force of the attack in your block.

You’ll end up with a lot fewer bruises that way.

Just as you add a snapping fist rotation at the end of your Karate punch, you should add a forearm rotation to your blocks. This adds a tremendous amount of power to your block and helps protect you from injury.

In addition to the forearm rotation, don’t forget about rotating your hip. Again, just as with punching, adding a hip rotation to your blocks further creates the power you need to defend yourself.

Your elbow will be in different positions depending on which type of block you’re performing. However, always keep in mind not to let it get too far away from your body.

Your blocks are strongest when your elbows are up against your body. Of course, it isn’t always possible to have your elbow that close. Just don’t let it get too far out or you lose a considerable amount of strength.

Timing is critical when blocking. Too early and your block may turn into an overblock that will leave you off-balance and vulnerable. Too late and you could get clobbered by the strike you were attempting to prevent.

Practice makes perfect and a good way to practice your timing is to do Kumite drills with your fellow students.

Don’t ever forget, a basic tenet of Karate is that it is self-defense. While Karateka learn attacks to effectively end a fight, they should never be the ones to start it.

This is why karate blocks are such an important piece of the puzzle. They give you the chance to ward off the attacks of an aggressor while making your intentions clear.

You don’t want to fight, but you are more than prepared to do so if needed.

Interested in learning more about other aspects of Karate? Check out our blog on Karate weapons.