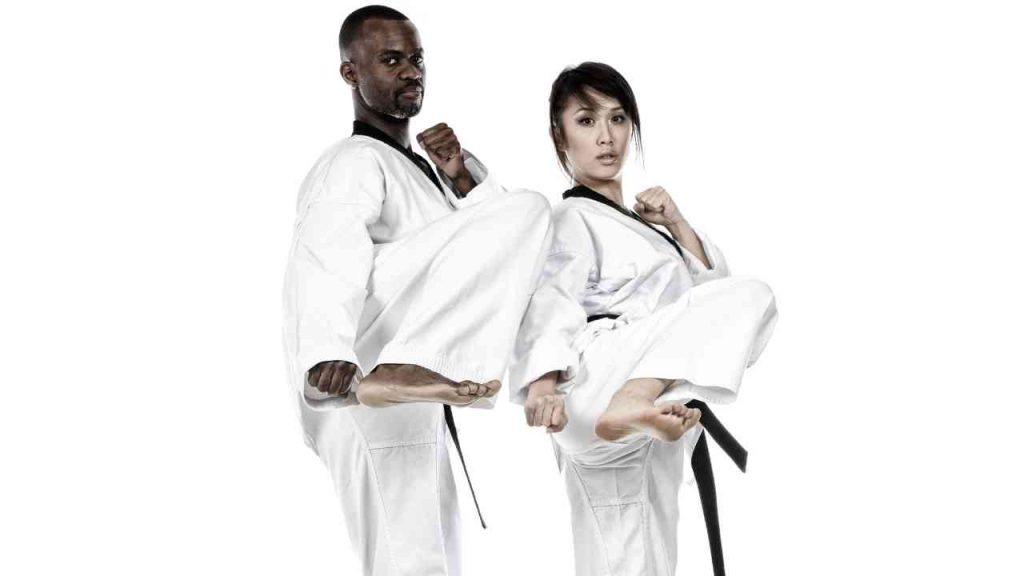 Who are the kings of kicking in the martial arts world? Arguably, Taekwondo practitioners can kick everybody out of the park (pun intended).

Curious about the different Taekwondo kick techniques? Let’s look at 15 basic Taekwondo kicks list with their Korean names. We’ll also include some Taekwondo videos here so you can see the kicks in action!

The front kick is one of the best Taekwondo kicks for beginners and is often the first foot technique new students learn. To execute the technique, raise the knee of the kicking leg high, then “snap” the foot out and forward.

This kicking technique can cause tremendous damage as well as push your opponent back.

The sidekick is one of those types of kicks that you will see in many disciplines, including Karate. It is executed with the back leg.

If your right leg is back, you’ll have to turn to the left 90 degrees so that your chest is facing to the left. Simultaneously, you’ll chamber the kick by raising your right knee. Lean back and send your leg straight out to strike your opponent in the solar plexus or face.

You can also turn backward instead of forward to perform the reverse sidekick. The final movement is the same and goes to the same targets. However, there is more power in this kick due to the momentum you get from the extra distance that you spin.

When performed and placed correctly, you can really ring your opponent’s bells with a powerful roundhouse kick. This is another kick considered part of Taekwondo basics and people typically learn it early in their training.

Bring your knee up sideways and extend your leg while pivoting on the standing leg. This kick requires significant hip mobility and flexibility through the inner thighs to execute correctly to a high (head) target. Midsection targets are significantly easier to reach.

A double roundhouse is an advanced kick that is made up of two roundhouse kicks in quick succession. Perform a roundhouse kick with one leg, then as the kicking leg goes back down, the other leg comes up immediately for a second kick. The switch happens in midair.

This technique is cool but loses some of its power because of the awkward back and forth movement. It also requires a lot of speed and flexibility to perform.

However, you should be looking over your shoulder and you shoot the kick when your back is toward your opponent. Don’t wait until you get all the way around as with the reverse sidekick.

At their core, these kicks are the same movement as the sidekick and back kick that we just examined. However, you add a jump to cover more distance and add more power to the technique.

These kicks may also be called the jumping sidekick and jumping back kick. In Korean, this translates as Eedan Yeop Chagi or Eedan Dwi Chagi.

The hook kick is great as a “fake out” technique or to salvage an off-target side or roundhouse kick if you react fast enough. Throw a roundhouse kick but “miss” your target.

Drive the momentum of the kick into bending your knee to snap your heel backward. The goal is to strike your opponent from the side with the heel of the foot.

Add a spin to the hook kick to create extra momentum and strike with more power. From the fighting stance, spin backward as if you were doing a back kick. Shoot the foot out and “miss” the target as with a regular hook kick.

Drive the momentum into snapping your foot back and striking the side of your opponent’s face with your heel.

10. Inner or Outer Crescent Kick – An Chagi or Bakkat Chagi

The crescent kick is an explosively fast kick that is perfect for close quarters. Sweep a straight leg upward in a curving motion either to the right or left of the centerline. Continue the curve toward the centerline to strike your opponent’s jaw with the inside or outside of the foot.

Bringing your foot inward and striking with the inner part of the foot is an inner crescent. The opposite motion is an outer crescent. They may also be called inside or outside crescent kicks.

The scissor kick is an incredibly advanced move and is most commonly seen in demonstrations rather than competitions or self-defense. The idea is to kick two opponents simultaneously with a jumping sidekick and jumping front kick.

Coordination and flexibility are key — as well as having two opponents conveniently in the right places.

The twist kick is great for surprising your opponent by coming at them from a direction they don’t expect. Chamber the knee as for a front kick but then twist the knee out to the side by rotating at the hip. Extend the leg to strike your opponent in the midsection or upper leg with the top of your foot.

As you might imagine, this kick requires significant flexibility.

The ax kick is similar to the crescent but without circular motion. Instead, you swing a straight leg upward just enough outside of the centerline to clear your opponent. Then bring the leg straight down on your opponent’s head, shoulder, or collar bone.

Another great kick for close quarters is the knee strike. This is an excellent self-defense move but keep in mind it is not allowed in Taekwondo competitions.

Basically, drive your knee into your opponent wherever you can reach. The groin and solar plexus and good targets. Thrust your hips forward at the same time to add power to the kick.

You can also use this technique to push your opponent back either because your back is against the wall or you’re following up with a powerful kick and need more space.

The purpose of this kick is not so much to damage your opponent, but rather to create space. Bring the knee up as for a front kick but instead of snapping the foot out, extend the leg and push the hips forward.

Think of it as pushing someone as opposed to punching them — just with your feet.

We hope you have enjoyed this Taekwondo kicks list. Read on if you have any burning questions about Taekwondo moves. We’re going to answer some FAQs here.

What is the most effective Taekwondo kick?

The easiest, yet still extremely powerful kick to execute is the front kick, or ap chagi. It’s the first kick most people learn yet is still used extensively by Taekwondo masters.

Why is Taekwondo so heavy on kicks?

Legs are both longer and stronger than arms and thus more effective — at least in the opinion of the masters who found Taekwondo. However, keep in mind there is a place for punching in Taekwondo. A well-rounded artist learns to use everything at their disposal to attack and defend.

What makes Taekwondo kicks so devastating?

On top of that, Taekwondo kick techniques use momentum and bodyweight to exponentially increase the power of the move.

What’s the difference between karate kicks and taekwondo kicks?

Taekwondo kicks tend to be a little faster and flashier with more spins and jumps. In general, Taekwondo artists are more flexible and faster with their feet than Karateka and can deliver a flurry of rapid kicks.

However, there are many kicks that you will see in both disciplines such as the classic sidekick and the roundhouse kick. Of course, Taekwondo has a wider variety of kicks and they are used far more often than Karate kicks.

Why does Taekwondo not have low kicks?

Technically, Taekwondo does have low kicks. Pretty much any of the Taekwondo kicks can be directed at a lower target and be called a low kick.

However, they are not used often in sparring because of the risk of injury to the students. In competitions, points are scored for body shots as well as higher kicks look more impressive.

How can I learn all Taekwondo kicks perfectly?

Train incessantly. Practice the kicks over and over and incorporate mobility exercises to increase your flexibility. Check out the video for some great tips.

Learning all the types of Taekwondo kicks to absolute perfection is a pretty lofty goal and one that is nearly impossible to attain. However, you’ll have a lot of fun along the way!

Curious about the differences between Taekwondo and Karate? Check out our article comparing the two!