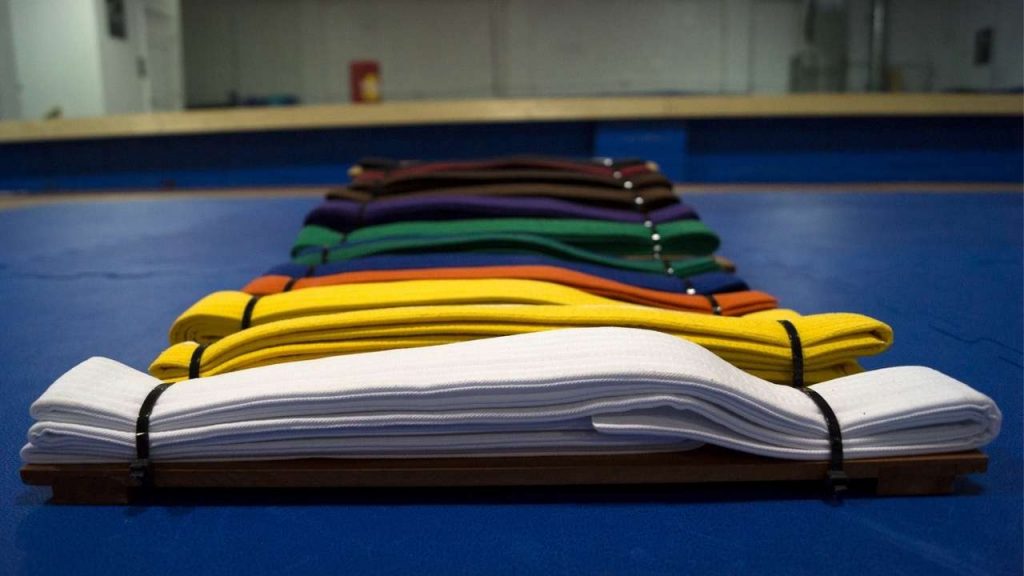 Have you ever wondered about all those different colored belts in a Karate class?

The visual cue about a student’s progress is handy. Plus, it provides a source of pride and a sense of accomplishment for Karate students as they move through the ranks and are awarded new colors.

But where did the idea of colored Karate belt levels come from? What is the correct Karate belt order and what is the meaning behind them all? Let’s find out!

How Many Belts in Karate?

There are 9 belt colors in Karate: white, yellow, orange, green, blue, purple, red, brown, and black. Though most people are only familiar with the two most common belt colors, there may also be more than one level of the same belt color in some karate belt ranking systems.

As the lowest belt in Karate, the white belt is where everyone starts. The largest cohort of students have worn this belt and many people never make it past this point.

The highest belt in Karate, and thus the most coveted, is the black belt. Only about 3-5% of people who started training in Karate will complete their journey to earning a black belt.

Earning a black belt in Karate is a prestigious honor. It takes years to earn your black belt. Most people don’t realize the hours of sweat, tears, and even a little blood that go into earning this prize.

But when you receive your black belt…you’ll know. And the send of pride and accomplishment is profound.

Of course, you’ll also know that you’ve only just begun. Earning a black belt isn’t the end of the road in Karate, it is the beginning of a lifelong journey.

The Origins of the Karate Belt

It might surprise you to know that the whole idea of using different colored belts to denote a student’s rank isn’t that old. Though used in many types of martial arts, the belt ranking system is just a little older than Karate itself.

(If you’re now wondering how young Karate is, check out this post to learn more about Karate’s origins. Spoiler: Karate is technically less than 100 years old!)

The Legend of the Karate Belt’s Origin

There is a legend that you may have already heard about the origins of the Karate belt.

It is said that students were given a white belt when they began their training. Over the years, the belt would become stained and dirty with sweat, dirt, and blood. Students were told never to wash their belts. Superstition said that in doing so, they would “wash off” their experience.

Once the belt turned black, the student was considered a true martial artist.

The legend makes the belts sound both awesome and ominous. Of course, the real story is a little more practical.

The Real History of Karate Belts

For centuries in Okinawa, the birthplace of Karate, martial artists practiced in secret. Wearing a colored belt, or any symbol of their progress or involvement in martial arts, was a dangerous idea.

The idea of a colored belt system actually began with Jigoro Kano, the founder of Judo, in the late 1880s. Before that, students were awarded certificates only as they progressed through the ranks.

Jigoro Kano got the idea from Japanese swimmers who wore a black ribbon around their waist to symbolize their more advanced status. He started giving out belts in his Judo school. White was for beginners, black was for teachers and advanced students.

From Judo, the system migrated to Karate, Tae Kwon Do, and other martial arts styles.

In the early 1900s, a few more colors were added to the system. And it wasn’t until about the 1930s or 40s that the full-color Karate belt system was designed.

There is no one-size-fits-all ranking system for the Karate belt colors. Different styles of Karate (and sometimes schools within the same style) use different belt systems. The colors of the belt are typically the same, but the colors go in different order and some systems drop a color or two.

Shotokan Karate belt ranks go in this order: white, yellow, orange, green, purple, brown, and black. There are two levels of purple and three levels of brown belt in this system.

Other common color orders include:

The notion of the same white belt turning to black as a symbol of a student’s progress is mythical. However, the idea of the colors progressing from lighter to darker was done for a practical reason.

The colored belt levels in Karate came into more widespread use during and after World War II. At that time, life was hard and money was scarce. Instead of awarding students a new belt for each rank, the same belt was dyed a darker color to conserve resources.

So, how did they pick the Karate belt colors? What does each color mean？

Did a bunch of Karate masters get together one day and toss their favorite colors into a hat, drawing them out until they had enough colors?

Like everything else in Karate, there is thought and intention behind the colors chosen. They represent the life cycle of a plant from its humble beginnings to its seeming end.

Here’s how it goes.

The first belt in Karate, of course, is the white belt. It represents the beginning. As the little plant bursts through the soil, it is greeted by the bright, white light of day.

As the plant adjusts to the light, it deepens into the golden hue of sunlight. The student is being warmed and stretched in the pursuit of their goals.

The little plant has survived the hot sun and is now sending forth new growth. Green leaves and shoots are spreading out from the plant. The student is growing and becoming more proficient in the basics.

The plant is continuing to grow and stretch up towards the bright blue sky. The student’s knowledge is expanding and growing.

The day is drawing to an end, the blue sky darkens to purple. The student’s knowledge is deepening and becoming more profound.

The final rays of the sun are red and hot on the blossoming plant. Training is intense but the student has come so far.

Red is also a symbol of danger. The student is becoming proficient enough that they are a danger to their enemies.

The darkness is intensifying and the plant humbly bows its head back towards the soil from which it came. The seed is maturing and ripening as the harvest nears. The student is beginning to reap the rewards of all their toil and training.

Darkness falls and the plant dies. But in its place, there is a new beginning. The student has learned so much, including that there is so much more to learn. The first stage of their martial arts journey is complete, but the journey has just barely begun.

The journey doesn’t stop once you earn a black belt. There are 10 degrees of black belt, each one requiring years of intense training to attain.

For example, in 2011, 98-year-old Keiko Fukuda became the first woman to earn a 10th-degree black belt in Judo. This honor is held by only a handful of others around the world. Needless to say, you must dedicate your life to training and teaching martial arts to ever reach this level.

Shotokan Karate follows a dedicated belt system to rank a student. The karate belt system uses a variety of coloured belts to determine an individual’s skill level. With each passing level, the colour of the belt gets darker. Many also believe in the theory of the white belt becoming dirty over time and turning black, representing a black belt, the best rank.

Mentioned below is the belt ranking system in Shotokan Karate:

The students of the Kyokushin discipline are awarded belts once they’ve demonstrated techniques for the appropriate belt levels. These can be mastering certain kicks, strikes, or katas. The schools have become splintered over the years and the belt rankings may vary. Ask your instructor for the belt rankings at your school. The following list contains the commonly used belt ranking system:

Once you start training Shorin Ryu, your desire to get better and avail higher ranks will definitely increase. To assess your growth, there’s a ranking system based on belt colors.

As soon as you reach the first kyu level, the next goal is to get the black belt. On average, it takes 4 to 6 years for an individual to reach that level. But that isn’t the ultimate goal, though. Black belts are further categorized into Dan’s grades.

The belt ranking system for Wado Ryu Karate is as follows:

The belt order followed for Goju-ryu Karate is mentioned in the table below:

Like most karate ranking systems, Shuri Ryū also has the belt system. Trias himself laid out the rules of the ranking system in “The Pinnacle of Karate”.

The ranking system is as follows:

The ranking of belts starts from 9th Kyu, which means the beginner level to Shohdan/1st dan. For better insight, we have mentioned the belt ranking system of Shito-Ryu in the table below.

Chito Ryu Karate has a belt system that runs from white to black with multiple levels in between. Here are details on how this system works:

After the black belt, there are still some grades that can be promoted, they are: Shodan, Nidan, Sandan, Yondan, Godan, Rokudan, Nanadan, Hachidan, Kyudan.

If you haven’t begun your own journey yet, you’ll start with everyone else — with a white belt. Should you choose to undertake this training, you’ll be in for a life-changing adventure.

Looking for tips and advice along the way? Check out more about effective karate techniques.