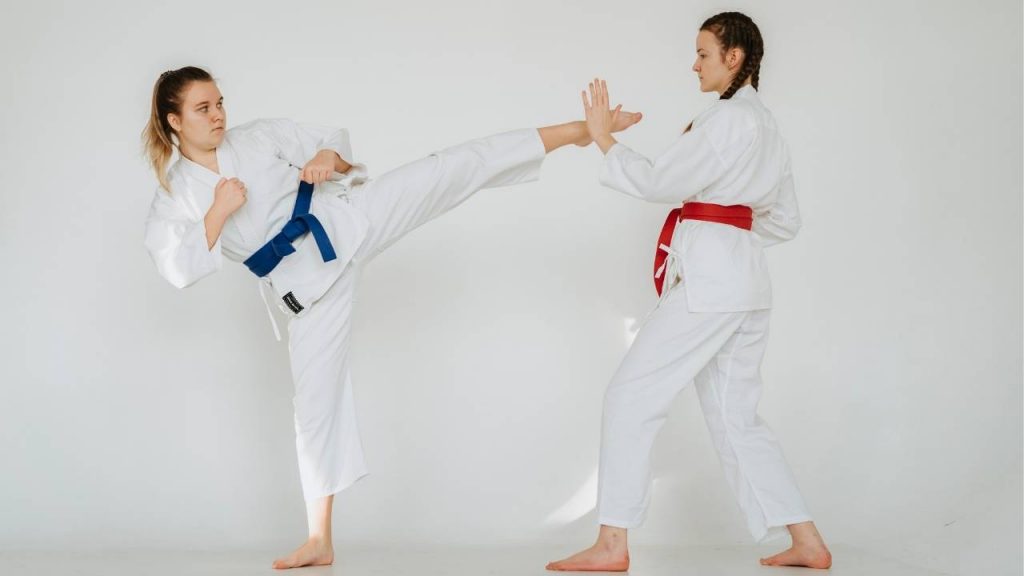 No one is born executing flawless kicks and punches. Nor do they have the reflexes to block speedy attacks coming at them.

That’s why we have to train so hard and spend so much time practicing to learn Karate.

Karate Kumite drills are an important piece of the training puzzle. But what is Kumite and how does it help? Let’s look at the basic levels of Kumite to find out.

The Purpose of Kumite

Performing kata is an excellent way to perfect techniques. In the beginning, you’re learning how to flawlessly execute the technique. As you become more advanced and practice the kata over and over, you’re developing the muscle memory needed to call upon these techniques in an instant.

But there’s something missing. You can imagine all you like, but you never get the chance to react to an opponent coming in for the strike. You have to train your reflexes just as much as you train your muscles for the techniques.

That’s where Kumite comes in. Students are paired with a partner to trade blows and lay the foundation for proper reactions in a real fight.

Kumite is called 組手 in Japanese, which literally means grappling hands. In Kumite, students get their chance to see how they’d fare on the street.

Rather than tossing new Karate students in the ring and tell them to start fighting, basic Kumite is more controlled. This guided training is more effective than just throwing students in the deep end and insisting they can swim.

There are various levels of Kumite from one-step sparring drills to full-on free sparring and everything in between.

Here’s a quick rundown of the different types.

Ippon Kumite is the most basic level. The name means one-step sparring and this type of Kumite is used for self-defense drills.

Through these drills, the student learns to correctly measure the distance and speed of their opponent’s attacks.

To perform the drills, one student is the “attacker”. The defending student must perform a defense and mount an attack almost simultaneously. Often, once the defending student has finished their round, the partners switch and the attacker now defends.

The moves to be used are usually predetermined. This allows the students to focus on execution rather than trying to come up with a technique on the fly.

Ippon Kumite is as much mental as it is physical practice. While engaged in these drills, the student is encouraged to think about their body position and breathing. Balance is also very important as they learn how to side-step an attack while strategically positioning themselves for a solid blow to the opponent.

Check out this demonstration of Ippon Kumite here:

Sanbon Kumite, or 3-step sparring, is the next step up. Instead of performing only one defending and attacking move, the student performs short combo techniques. Again, the techniques are predetermined to allow the student to focus on other objectives.

During these drills, blows are often restricted to a certain area to hone that practice. For example, your instructor might tell you to participate in sanbon kumite only at the jodan level (high-level), etc.

Gohon Kumite meaning is 5-step sparring. The basic idea is the same as sanbon kumite, just longer. Instead of 3 steps, the students will be doing 5.

Check out this quick demonstration of Gohon Kumite here:

Kumite is used both in Karate schools as an instructional technique as well as in tournaments. Kumite tournaments have strict rules and they can vary from one event to another. Always know the rules for any tournament you will be competing in.

In general, most karatekas are encouraged to “pull” their punches during Kumite. After all, the intent is not to hurt your training partners! Proponents of this thought process argue that technique and accuracy are most important and can be developed without using full force on other students.

Other masters argue that training this way is training for failure in a real fight. The body gets used to pulling punches and will do the same on the street. To simulate a real fight, students may be given protective gear and allowed to use full force on one another. Often certain target areas (knees, face, etc.) are still prohibited for safety.

However, there are some hardcore schools out there that allow full-contact Kumite. The fighters are given little or no protection gear though certain targets may not be allowed. Just watch a Kyokushiin Ippon Kumite match and you’ll see what we mean. Things can get interesting quickly.

Developing Your Skills as a Karateka

Regardless of which Kumite style your school ascribes to, learning Karate in any form will always be a good thing. You’ll get exercise, train your mind and body, have fun, and learn how to defend yourself if you ever need it.

Ready to dive more into the wonderful world of Karate? Check out our recent post on an intriguing Okinawan weapon — the Eku!