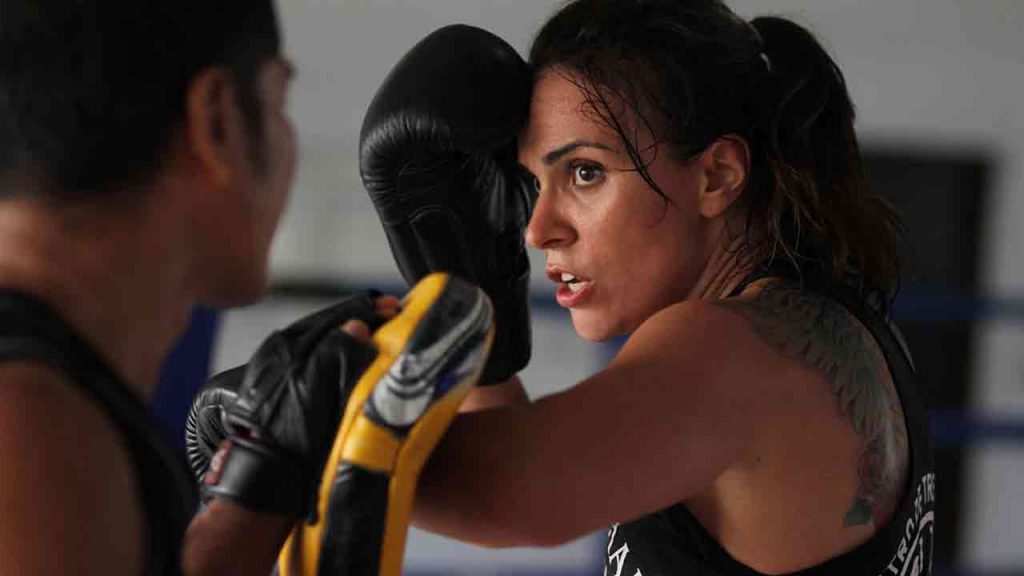 With all the different martial arts styles in the world, which one should you study? Is one suited to you better than another?

Is there even a measurable difference? After all, how different can two self-defense styles be?

Considerably, it turns out. Join me here for a detailed look at Karate vs Muay Thai to see how the two arts stack up.

If you are already a Karate enthusiast or have been a reader of The Karate Blog for a while, you’re already quite familiar with Karate. If not, learn more about the origin of Karate here.

However, you might not know much about Muay Thai.

Muay Thai (Thai boxing in English) is quite different than Karate or other martial arts like Taekwondo or Kung Fu.

It is the national sport of Thailand and, until recently, most people that studied Muay Thai were professional fighters. As such, Muay Thai is more serious and training is heavily bent toward sparring and preparing for sparring matches.

It is a stand-up fighting style but also incorporates clinches that can be devastating for the opponent. There is a focus on aggressive, powerful techniques and practitioners train by being kicked in the stomach and kicking trees to toughen their shins.

A Muay Thai fighter’s intent is to injure/disable the opponent as quickly as possible without taking damage themselves. To say that these tough fighters are vicious is a bit of an understatement.

Muay Thai is sometimes referred to as “the art of 8 limbs.” Instead of using primarily hands and feet, Muay Thai fighters use their fists, elbows, knees, and shins to attack and defend.

Difference Between Muay Thai and Karate

With that being said, you may wonder “is Muay Thai a martial art?” Karate (and other popular martial arts) tend to take a more laid-back approach. For example, Karateka will stop an attacker from hurting them but they won’t go out of their way to cause damage.

Muay Thai and Karate are both considered martial arts and both are primarily striking styles. However, the similarities pretty much end there. Let’s break it down to discuss further.

Like Karate, modern Muay Thai was developed over centuries in Asia. While Karate formed mostly on the island of Okinawa in Japan, Muay Thai comes to us from Thailand.

It was developed out of Muay Boran, an ancient Siamese boxing style. Though it started as a self-defense style, modern Muay Thai is considered a kickboxing style.

Karate Kumite (sparring) is focused more on skill and precision rather than knocking out your opponent. The fight is stopped after every landed strike and fighters earn points if the hit was deemed valid. Well-placed strikes executed with too much force may be discarded or even penalized.

Muay Thai is all about destroying your opponent. Blows that make the opponent noticeably flinch or react are worth more points. Plus, any sign of weakness is viewed extremely unfavorably and may result in your opponent being declared the winner.

Karate tends to be a very linear, stand-up style of fighting. Most techniques are with the feet and hands, though hands are used more for blocking. Very few Karate schools teach grabs and grappling like what you see in Judo or Brazilian Jiu-Jitsu.

The techniques are powerful, but the goal is not to decimate your opponent. From a self-defense standpoint, Karate moves work well to disable or impede your opponent for a short period — in theory, long enough for you to get away.

Muay Thai movements are a different beast. Strikes are executed with the hands and feet, but also the harder areas of the body such as elbows, knees, and shins. Furthermore, Muay Thai fighters are famous for kicking trees and other hard objects to toughen their shins even more.

Muay Thai is also famous for the clinch, in which the fighter grabs the back of the opponent’s neck and destroys them with repeated knee attacks. Other than this clinch, grabs and grappling are not often taught in Muay Thai schools.

Karateka train three primary pillars in Karate — Kihon, Kata, and Kumite. Kihon are the building blocks of the techniques and Kata are a predetermined set of movements that act as a living library of techniques. Kumite is Karate’s version of sparring.

Muay Thai fighters learn basic movements to get started, which can be considered similar to Kihon. However, there are no Kata to memorize and the majority of training focuses on sparring. Fighters work with a heavy bag, pads, and take endless kicks in training to toughen up.

Karateka wear the iconic gi uniform with a colored or black belt to denote rank. In competition, they may use gloves, but other protective equipment is rare. Some styles of karate use shinguards, headgear, or chest protection.

Muay Thai fighters use professional gloves and shin guards are a must for beginners. Headgear, knee and elbow pads, and lots of athletic tape are also frequently used. Instead of a full outfit, fighters tend to wear just a pair of comfortable shorts.

Most people are familiar with the colorful belt ranking system Karate students move through on their journey from white to black belt.

Muay Thai doesn’t have the same system. Since it was developed as professional sports, fighters weren’t interested in attaining status belts, but rather championship ones. Very few people studied Muay Thai for leisure.

Now that Muay Thai is becoming popular outside the professional realm, some Muay Thai schools are implementing a ranking system. In the same vein, the World Thai Boxing Association has developed a system of colored armbands to denote rank.

7. Muay Thai and Karate in the Olympics

Karate made its long-awaited debut in the Olympics this year in Tokyo. However, for unknown reasons, it will not be reappearing in Paris in 2024.

Muay Thai received provisional recognition from the International Olympic Committee in 2016. This year it is expected to receive full recognition, which means there is a chance it will appear in the 2024 Games. However, nothing is set in stone yet.

Which is More Effective for Self-Defense?

Both styles teach effective techniques for self-defense. However, Muay Thai training tends to turn out scrappier fighters who can take a punch and keep going. Karate techniques are powerful but require more skill to execute properly.

Who Would Win? Muay Thai Fighter vs Karateka

Karatekas are formidable, but Muay Thai fighters are scrappy. Their focus is set on decimating their opponent, not executing a perfect technique.

There is a reason Karateka Kenji Kurosaki was defeated by a Thai boxer in 1963 — and why the rivalry between the two styles has lived on to this day.

We’ve been generalizing about Karate so far, but there are several styles of Karate out there. The primary style of full-contact Karate, Kyokushin, has more in common with Muay Thai than other forms of Karate.

It tends to be more vicious and Kyokushin Karateka spend time striking their limbs to toughen them. They also fight bare-knuckled, which is something even Muay Thai shies away from.

All this to say, a Kyokushin Karateka would fare considerably better against a Muay Thai fighter. There is a good possibility they might even win!

Check out this interesting fight between a rather scrappy Karateka and a Muay Thai fighter.

Karate vs Muay Thai: Which Wins for Physical Fitness?

If you’re interested in a good workout, both styles will offer it to you. Deep Karate stances and endless drills are excellent ways to strengthen the body.

Because of this, Muay Thai generally wins for physical fitness, though it varies depending on the school and the student.

Karate vs Muay Thai: The Best Sport for You

So which sport is right for you? It depends on your preferences.

Do you prefer precision practice, memorizing kata, and not fearing for your life during a sparring match? Karate is perfect for you!

If you love the idea of pushing yourself to and even past the limits, training hard, and taking even harder hits, Muay Thai is right up your alley.

Already have a favorite? Let us know what it is in the comments below!