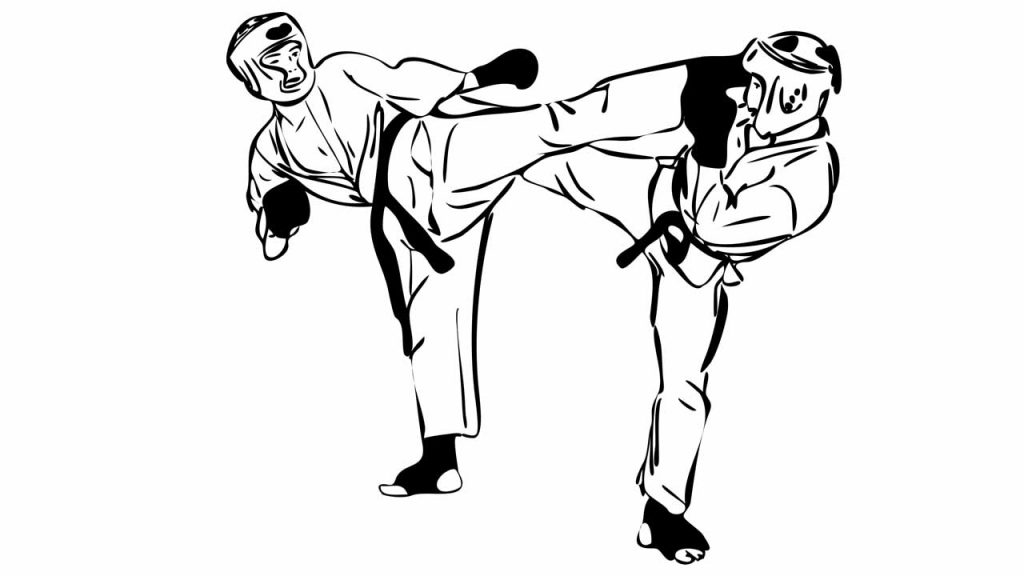 How do you win a karate competition? Unlike the sometimes brutal knockout matches of the UFC or even the MMA, the road to winning karate competitions is through good technique rather than brute force strategically applied.

Well-executed techniques landed on the opponent = points scored. Plus, many moves or targets that are considered too dangerous are banned in karate competitions.

So, how do you score these points? What are the basic karate rules? Let’s find out.

First, let’s draw a distinction between competition karate and street-fighting. Karate was developed as a method of self-defense. The moves are designed to quickly end a fight in your favor — or at least stun your adversary momentarily and give you time to get away.

Thus, in a street fight, don’t expect mercy from a karateka. They will hit hard and fast and the objective is to disable their opponent.

However, sport karate is something different. The point is to practice and test your skills against a worthy opponent — not knock each other’s brains out. Some critics say that sport karate with all its rules and restrictions is poor practice for a fight in the real world. After all, there is no referee on the street to separate the fighters after one lands a well-placed hit.

Even so, with the arsenal of effective techniques a karateka learns, who really wants to test their luck against them in a dark alley?

In 2016, it was announced that Karate would be making its debut at the 2020 Tokyo Summer Olympics. That has been postponed for obvious reasons, but is back on the calendar for July-August 2021. The Olympic karate rules will be the same as the WKF rules used in tournaments all over the world.

There are two types of competitions in which karatekas can take part — Kata and Kumite. Since these two karate competition types are very different, we’ll go over them separately.

Kumite is karate’s version of sparring. Matches are 3 minutes long but may be shorter if certain conditions are met or if one fighter is incapacitated.

Contestants are placed in a 8m x 8m matted square with 1m of safety area on all sides. They will receive a warning if they step out of this square. If they step out twice, their opponent is awarded a point.

Points are important in Kumite. With enough points, you win the match — hence the name point karate, as it is sometimes called.

Contestants are also expected to abide by a certain set of karate tournament rules designed to minimize injury during the match. They must:

Many dojos encourage karatekas to “pull their punches” or strike with less than their full power to limit injuries in school matches. Depending on the rules of the tournament, strikes to the head or face may not be allowed. If they are allowed, they may be limited to senior-level contestants.

Contestants are divided according to weight to pit similar-sized individuals against each other.

The rules are very strict on what kumite equipment is allowed/required and contestants can be disqualified before they ever reach the ring if they fail to meet these requirements.

All contestants must use a plain white gi (karate uniform) with no embroidery or other marks. Instead of wearing the belt that corresponds to their rank, contestants use either a red or blue belt to distinguish between them.

For protection, contestants should wear a mouthguard, body protection (with additional chest protection for females), foot pads, shin pads, and gloves. The specific gear that is required can vary from tournament to tournament. Always check to see what is required before participating in any Kumite tournament.

How to Win a Kumite Match

There are various ways that you can win a Kumite match. These include:

There are a couple of ways to deal with a tie at the end of the 3-minute match. One method is to declare the winner to be the first contestant who scored a point. The other is for the judges to decide a winner based on the flawless (or not-so-flawless) execution of techniques. This method is also used when neither contestant scores a point.

The scoring method to be used is always laid out in strict detail before the karate match begins.

How to Score Points

Sport karate is all about technique. Land a well-placed (allowed) strike with proper technique and you’ll be awarded points. Break the rules one too many times and you’ll be disqualified.

You can win one, two, or three points depending on the type of technique you use.

Check out this demonstration of the techniques recognized by the WKF here:

As you can see, there are only a handful of valid techniques — though karatekas have many methods of getting to them. Contestants also have to be extremely careful when performing all of these techniques. Perform them incorrectly (or making an invalid strike can result in warnings and disqualifications.

If the referee sees a valid technique used, they will stop the fight. The technique will be confirmed, the correct number of points awarded, and the fight allowed to resume.

Kata competition is a whole different idea than Kumite. Instead of displaying skill against a moving opponent, katas are more demonstration-style. However, as the WKF rules make clear, kata is not a theatrical presentation, the performance must show an adherence to the mindset and traditional values of karate.

In other words, you should see the karatekas fighting spirit bubbling up from within as they perform their techniques.

A kata is a predetermined set of techniques that originally began as a sort of “technique library.” It was a good way to preserve and pass down techniques back before people could video record themselves performing the techniques so they wouldn’t forget them.

Though there are many more katas in existence, the WKF approves 102 katas to be used at any of the events they recognize.

Katas are performed in the same 8 x 8 meter padded “ring” as Kumite. They can be performed by an individual or by a team with three members. The synchronization with which these teams move to ensure that every technique happens at exactly the same instant is incredible!

Though contestants do not have an opponent, the display should still be realistic. Contestants must display all the focus and power they would use in a real fight, plus the potential impact of their techniques should be apparent to viewers. They must balance speed, power, and strength with grace, balance, and rhythm.

Trust us when we say it is not as simple as it sounds.

Katas must be utterly flawless. A single misstep or even a slight wobble could mean the difference between victory and defeat. You might not have to worry about a kick to the head joggling your brain, but the pressure to perform is incredibly high.

The structure is elimination-round style and how many rounds there are is determined by the number of competitors. Individuals or teams will go up against one another until only two remain for the final round.

Contestants can never use the same kata twice in a round. If you plan to enter a kata tournament, be sure you have a few katas in your arsenal to choose from.

Wondering what a kata demonstration looks like in action? Check out this incredible display by Japan’s Rika Usami.

There are competitions for all levels of karatekas, so don’t worry if you are just starting out. Competing is an excellent way to put your karate skills to the test as well as motivate yourself to do better. If you are in a karate school, it’s likely you’ve already participated in informal karate competitions. Karate schools often get together to hold tournaments as well where you can pit your skills against those from “rival” schools.

Before you jump in the ring, be sure to brush up on your favorite karate techniques to ensure that you can best your opponent and make your master proud!

PS. You can find and download the most updated version of the WKF Competition and Ranking Rules here.