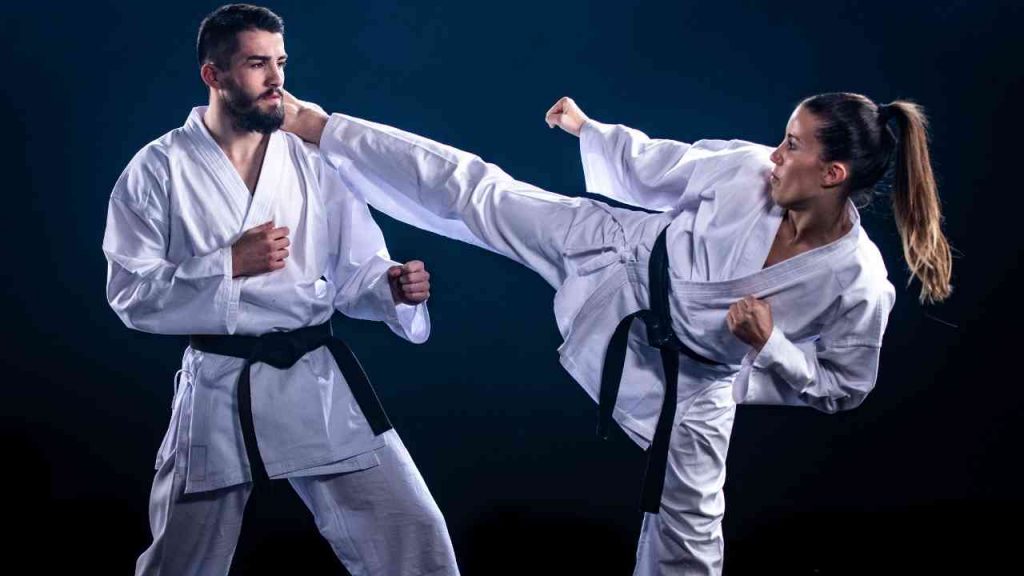 What is Kyokushin Karate?

Kyokushin Karate is often regarded as one of the “hardest” sub-styles of Karate. It involves full contact sparring (Kumite) and prohibits the use of any sparring gear. You can only use a mouthguard and groin protection. Even during tournament events, protective headgear and gloves are not used.

Kyokushin is exemplified by grueling training and hard sparring sessions. Therefore, students practicing this art are expected to have decent cardio levels. It transcends training and forms a way of life. Now that I’ve given you a short introduction, let us try to know more about the origins and history of this style.

Kyokushin Karate was founded by Sosai Masutatsu Oyama who was born on 27th July 1923, in a village in South Korea. From an early age, he started training in the art of Chinese Kenpo and the “Eighteen Hands form”. It was in 1938 that Oyama left for Japan to join an aviation school to become a pilot. But, this dream did not work out.

He continued his practice of martial arts and started practicing Okinawan Karate. He attained the stature of 4th Dan at the young age of 20 due to his unending dedication. At the same time, Oyama enrolled himself in the Japanese Imperial Army. In the army, he started his practice of Judo to master the handgrip. In a matter of just 4 years, he attained the stature of 4th Dan.

But, after the defeat of Japan in the Second World War, Oyama found himself disillusioned and anguished. Then came So Nei Chu, who was a master in Goju-Ryu Karate. Oyama joined his dojo, which had a great impact in his life. He managed to pull himself out of despair and learned the spiritual foundations of Buddhism. Master So asked Oyama to dedicate his life to the “Warrior’s Way”. He secluded himself in the mountains to train his body and mind.

Oyama won the All Japan Open Karate Championship two times and succeeded in many other tournaments and championships. He opened his first dojo in 1953 in Mejiro, Tokyo. This was the time when his strength was at its peak. It is said that the training in his dojo was ruthless.

His apprentices belonged to different disciplines of martial arts. Oyama observed them carefully and adopted the best techniques. Thus, he began laying the foundations of a discipline, which is known as Kyokushin Karate.

Oyama set up the International Karate Organisation (IKO) in 1965. This is the time when he introduced the world to Kyokushin (“the ultimate truth”) commencing a new form of Karate. It is because of this contribution that Oyama was given the title of “Sosai”.

After his death in 1994, several apprentices formed their own organizations. Hence, after a few years, it was decided that the name should be changed to protect its identity. This gave rise to the creation of the “World Karate Organization (WKO) – Shinkyokushinkai”. Today, it is the biggest karate organization in the world and boasts 93 country members.

The students of the Kyokushin discipline are awarded belts once they’ve demonstrated techniques for the appropriate belt levels. These can be mastering certain kicks, strikes, or katas. The schools have become splintered over the years and the belt rankings may vary. Ask your instructor for the belt rankings at your school. The following list contains the commonly used belt ranking system:

Let us take a look at some of the most iconic kicks in Kyokushin Karate. These are used for Kata, self-defense, sparring, and demonstrations. The names of these kicks may vary depending upon your instructor. Therefore, check with your instructor to know the appropriate technique in your school.

Kumite or sparring is one of the most important facets of Karate training. It denotes a controlled battle between two students using sparring gears. For beginners, trainers use the “Shotokan Kihon” kumite techniques. It involves using ample protective equipment to prevent injuries. But, Kyokushin kumite is not for beginners.

This is because it does allow the conventional, Olympic style of sparring. Kyokushin kumite does not involve using gloves or protective gear during their sparring sessions. Moreover, it allows kicks against the head, body and legs of the opponent. This style of kumite proves to be grueling as it allows knee strikes and punches against the body.

Kyokushin has also given rise to the famous “100-man kumite”. It involves one person fighting 100 rounds of kumite against 100 different or similar level opponents. Hence, kumite in Kyokushin karate is the hardest kumite to endure.

The father of Kyokushin Karate created this style for the application in actual self-defense when compared to other styles. This is due to the reason that the style relies on sparring and real application. Many dojos subject their students to everyday Kumite, which can prove to be daunting.

As noted earlier, the sparring sessions of Kyokushin are distinct from other forms of martial arts. Since they do not involve protective gear, it can be unpleasant for newer students. But, this does not make it a dangerous martial art. The risk for injuries is the same as in other styles. This style of sparring proves to be helpful when it comes to real-life situations.

The students of Kyokushin have a firm grasp over the manipulation of power. This helps them to avoid injuries while landing strikes in an actual fight. The hardened form of training also makes them immune to strikes. The entire idea is to familiarise the body with strike and numbing its effect on the body.

The drilling aspect of the Kyokushin karate training is also monumental in a street fight. It allows the moves to be logged into muscle memory. So, in an intense situation, the body will automatically perform the right moves for offense and defense. The realism of Kyokushin training helps to build an excellent skill set, which can prove to be devastating for any opponent in a street fight.

The training of Kyokushin is not embodied in utilizing power. It is based on generating power by using hips and weight transition. Therefore, the person will be able to throw punches and kicks without expending a lot of energy. It develops your speed and builds agility. Countless hours are spent on perfecting techniques and execution. There are not many martial arts, which let you experience such realism.

Curious the difference between Shotokan and Kyokushin, check our article: Shotokan VS Kyokushin.