Karate VS MMA: Which Style Wins? 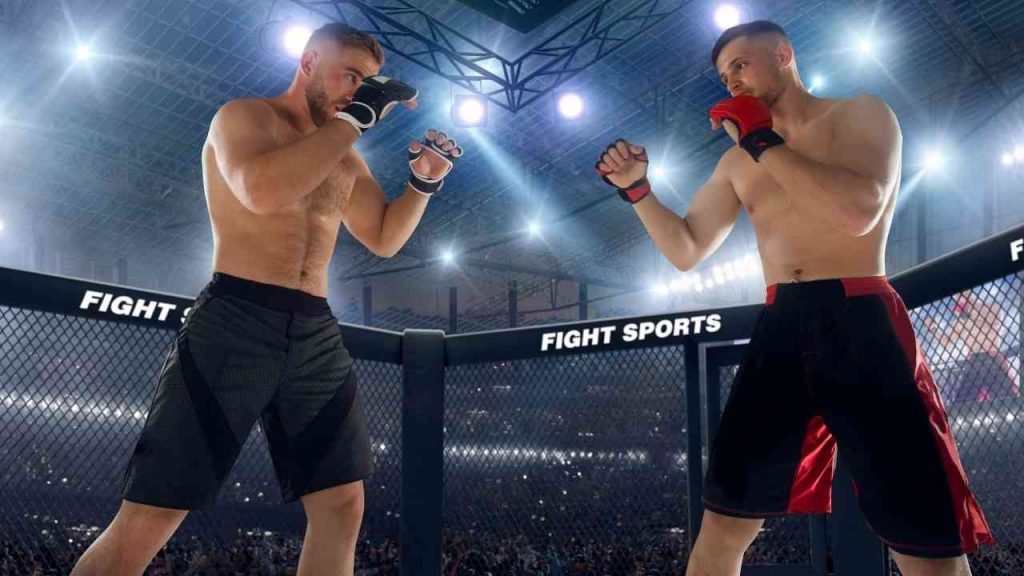 The Way of the Empty Hand or the way of the ultimate knockout?

In basic terms, this statement contrasts Karate with MMA quite nicely. Karate is a way of life while learning powerful techniques for self-defense. MMA is more about strengthening and training the body and mind with the purpose of annihilating your opponent in combat.

Whether you already love Karate or are on the fence about which style to study, this article will give you a good idea of the similarities and differences between Mixed Martial Arts vs Karate.

What Is MMA? Is MMA a Martial Art?

While you’ll find a lot of techniques in MMA that appear in some martial arts styles, MMA is not considered a martial art in the traditional sense.

Karate (and all the other martial arts) have certain components that MMA is lacking. There is a philosophical component to martial arts that make them more than just learning a bunch of techniques. Discipline, focus, and other mental training accompany the physical movements.

Martial arts like Karate, Tae Kwon Do, and others developed over a number of years by people looking for a way to defend themselves.

Modern MMA has borrowed techniques from many types of martial arts — Brazilian Jiu-Jitsu, Muay Thai, Kung Fu, and others. Many MMA fighters move into MMA after already having studied a martial art. Thus, you’ll see Karate in MMA with Karateka that move into the sport.

Check out this highlight reel of Karateka fighting in MMA:

However, MMA itself is not a martial art. It is considered a combat sport. Though it also has ancient roots, the primary purpose of MMA and its predecessors have been sporting events rather than self-defense.

Difference Between Karate and MMA

Now that you have a basic idea of the overarching difference between Karate and MMA, let’s break it down.

Karate has humble origins among the peasants of Okinawa. They were seeking a way to defend themselves, particularly once their Samurai overlords forbade them from carrying weapons.

The roots of MMA can be traced back to Ancient Greece, the founders of the Olympics. The Greeks held full-contact competitions called Pankration that were very popular at the time.

The popularity of the sport waned over the years but made a comeback in the 20th century in the form of modern MMA.

Karate competitions and MMA competitions are vastly different. In most Karate Kumite, the fight is stopped after every hit to determine its legality and award points. The match is held in a square “ring.”

There are some styles of Karate that allow full contact but most are more technical. Competitors are encouraged to pull their punches and overly powerful blows can result in a penalty. Fighters win by demonstrating great skill.

In MMA, fighters are often put in a cage and the fight can get brutal quickly. The point is to knock out the opponent rather than to simply score points.

In Karate, techniques are typically limited to striking with the hands and feet. There is an emphasis on control and techniques must be performed precisely and deliberately.

Karateka are known for their distinctive uniform called a gi. In competition, they use sparring gloves and bare-knuckle fighting is not allowed.

Karate has a colorful system of belts through which the students move until receiving a coveted black belt.

MMA doesn’t have a belt system, simply distinguishing between amateur and professional fighters. However, many MMA fighters have earned a belt in Karate, Jiu-Jitsu, or another martial art.

The name Karate literally means “empty hand” in Japanese. However, in modern Karate, it is common to see Karateka training with a Bo staff. There are also a number of Okinawan weapons that are closely associated with Karate.

Weapons don’t appear much in MMA competitions, though many fighters train with martial arts weapons. M-1 MMA fighting, which appears in Europe, allows the use of weapons but the contestants also wear medieval-type armor.

Karate and MMA in the Olympics

Karate made its much-anticipated debut in the Tokyo 2020 Olympics in August of 2021. Unfortunately, it has been excluded without explanation from the 2024 Olympics in Paris.

Interestingly, though MMA traces its roots back to the people who invented the Olympics, it has never appeared in them. The cited reason is that MMA is too brutal.

Karate vs MMA: Which Is More Effective for Self-Defense?

Karate techniques are powerful and effective for self-defense. However, they generally require a decent skill level to execute them or use them effectively in a street fight.

MMA grappling techniques and the down-and-dirty style of fighting is more effective for self-defense. On the street, you’re not interested in allowing your opponent to walk away uninjured. Rather, you want easy techniques that will cause damage or enough pain that you can get away.

Who Would Win?  Karateka vs MMA Fighter

Is Karate effective in MMA? How do Karateka do moving from strictly studying Karate into MMA?

Karate kicks and punches can obliterate an opponent quickly. If an experienced Karateka lands a blow, they can take down an MMA fighter.

However, MMA fighters generally don’t follow the same rules as Karateka. They are more vicious and used to fighting dirty.

Thus, if you put a Karateka and an MMA fighter of the same ability level in a fight, the MMA fighter would probably win — unless the Karateka can learn to fight dirty as well.

Karate vs MMA: Who Wins for Physical Fitness?

Hard training in both Karate and MMA will offer excellent physical fitness benefits. The deep stances Karateka have to hold during Kata practice and endless practice drills condition and strengthen the body considerably.

The variety of techniques that MMA fighters learn and practice also conditions the body. However, MMA fighters also run and perform other exercises to strengthen their endurance and condition their bodies to take blows. If you want a more complete workout, MMA is the way to go.

Karate vs MMA: The Best Sport for You

When it comes down to it you can’t say that Karate is better than MMA or vice versa. They are two different fighting styles that offer different benefits.

Which sport is right for you depends on what is important to you.

Do you like the idea of training your mind and body together? Karate will be more fulfilling.

Are you more interested in pure self-defense techniques that you can use on the street? Then training in MMA will give you what you want. It’s all a matter of perspective.

Interested in learning more about the different types of martial arts? Check out our comparison of Karate vs Taekwondo!