Lights Out Time: An Introduction to Full Contact Karate 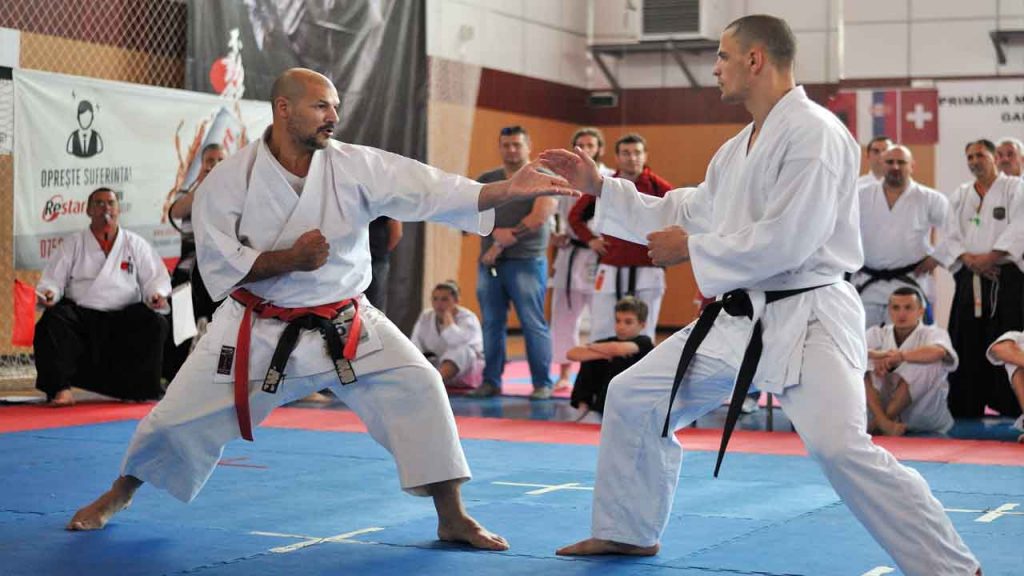 Have you ever heard anyone mocking competition karate? Many fighters, particularly within the realm of MMA, laugh at the strict rules put in place to avoid hurting your opponent..

Sport karate practitioners are more interested in showing off their skills and perfectly practiced techniques than in decimating their opponents. This is in stark contrast to the bloody and brutal fights that arise often in MMA.

However, though they might laugh, an MMA fighter still probably wouldn’t want to meet a full contact karateka alone in a dark alley. A proficient karateka is a formidable opponent!

Full contact karate is a type of karate which differs from other formats due to its allowance of knockout blows. Fundamentally contestants are judged on the effectiveness of their strikes over any other criteria such as aesthetics.

It was thanks to Kyokushin Karate tournaments that came about in the 1960s that full contact karate became available in a sport tournament format.

Full contact karate tournaments are a whole different deal. Punches to the face, groin, and joints are generally prohibited, but there is a vast arsenal of allowed techniques.

Contestants can punch and use elbow strikes to the body and limbs. They can also deliver kicks to the body, limbs, head, and face. Sweeps are allowed and it’s possible to win by knockout. Knocking out your opponent in sport Karate will only get you disqualified.

There are many different styles of full contact Karate. Some use gloves and body protection, others don’t. Sometimes grabs are considered valid techniques, other times they are not.

Sport Karate has the World Karate Federation and various national organizations that bring the style together. They offer mostly standardized tournaments (though individual tournament rules can still vary).

However, there is no one worldwide organization for full contact Karate styles. There is also no one particular Karate style that employs full contact sparring. Let’s look at a few of the main ones.

If there were one main full contact Karate style, this would be it. Kyokushin Karate, also known as knockdown Karate or Japanese full contact Karate, can get quite brutal. The gloves come off and there is no body protection (other than groin).

The idea is to simulate something closer to a real fight. Instead of stopping after each valid technique, the fight is continuous, only being stopped to break up clinches, if a contestant steps out of the ring, or if there is a knockdown or knockout.

This video shows Kyokushin Karate fighters in action as well as some pretty impressive knockouts.

This style of full-contact martial arts is basically what you’d get if you mixed Karate with American Boxing. In fact, it’s kind of hard to distinguish it from American Kickboxing.

Contestants use gloves, shin pads, footpads, and helmets for protection. As in kickboxing, kicks below the belt are not allowed and neither is the use of knees or elbows. However, practitioners still have a much wider range of techniques that they can use against their opponents when compared with sport Karate.

This relatively small style is another one that originates in Japan. The basic rules are based on knockdown karate, but with a major exception — contestants wear boxing gloves and punches to the face are allowed.

This style of Karate competition is mostly used in North America. It is similar to sport Karate in that clean, well-executed hits to specific target zones are the only qualifying techniques for points.

Fighters wear gloves and footpads and full contact blows are allowed. Plus, if you knock out your opponent, you win instead of being disqualified. This tournament format is very similar to that used in Taekwondo.

This video gives you a good idea of what this style of fighting looks like.

Another critique that other fighters (particularly grappling fighters) have about Karate is that there are virtually no ground-fighting techniques. Karatekas prefer to fight on their feet and put down their opponent.

However, it is a valid point they make about not knowing how to fight if you get knocked down. And that’s where the hybrid fighting karate style comes in handy.

This full contact Karate style is a mix of Karate and Judo grappling techniques. There are a few different hybrid styles that evolved out of this idea. Grabs, chokes, joint locks, and other techniques are allowed at a varying degree depending on which style you’re working with. Combat Karate, also known as Kudo, is one of the main forms of this hybrid style.

Check out this great video demonstration of Kudo.

The form of Karate witnessed during the Olympics was not full contact. The aim of Olympic Karate is points over power. Therefore Olympic Karate falls under the banner of sport Karate.

Is Full Contact Karate Effective In A Real Fight?

There is no doubt that full contact Karate is highly effective in a real fight. A full contact karate practitioner will be more than capable to handle themselves compared to a practitioner that has only trained katas and especially compared to someone who has no experience in martial arts. Full contact Karate training and tournaments simulate real fight situations that allow for a seamless transfer of skill and confidence to a street fight.

Where do you stand on the subject of full-contact Karate? Do you relish the idea of really putting yourself to the test and going up against a full-on knockdown Karate practitioner? Or maybe you prefer the relative safety of a sport Karate match? There’s a lot more finesse involved and less chance of being injured that’s for sure.

The good news is that there is something for everyone. Though none of these full-contact Karate styles are as widespread as sport Karate, it’s still likely you can find dojos in your area practicing one of the other mentioned styles.

If you do decide to put yourself to the test, let us know how it goes in the comments below!

Maybe you are also curious about sports karate versus traditional karate, check out our in-depth article to learn more.