Is Karate Effective for Self Defense in a Real Fight? 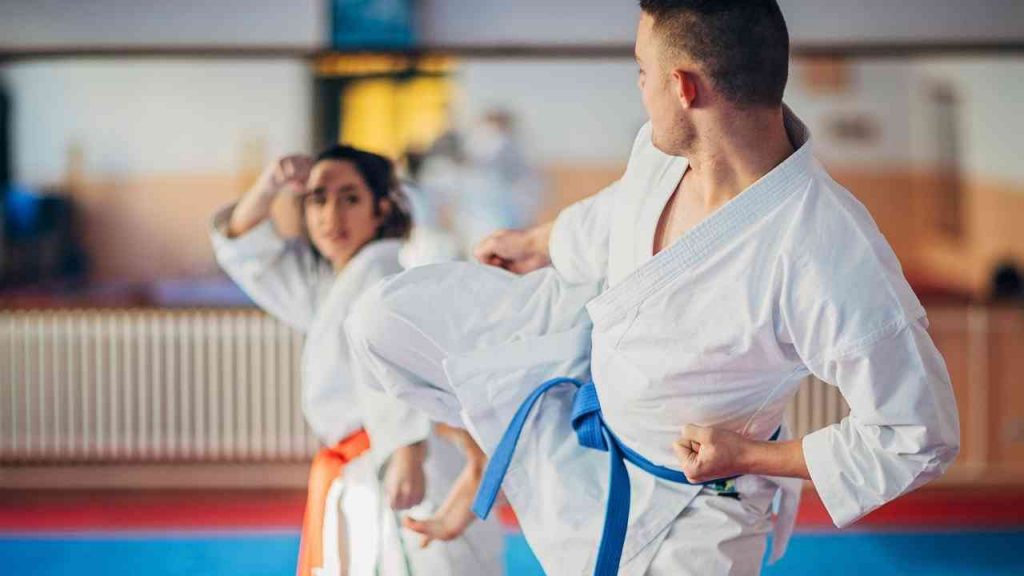 They fight like robots. They pull their punches. They have no idea what to do on the ground.

You may have heard these critiques about Karateka. This may lead you to question whether Karate is effective for self-defense in a real fight.

Advanced Karateka looks pretty flashy pulling off those fancy kicks, but flashy moves aren’t what will win a street fight. So, let’s pull it apart. What is the best martial art for street fights? Is Karate practical on the street? Absolutely! When used and trained correctly, of course. Let’s look deeper at what that means.

Is Karate Effective/Good for Self Defense?

Yes, traditional Karate techniques can be very effective for self-defense.

The basic Karate moves for self-defense are effective and powerful. When executed correctly, Karate strikes will blow your opponents away. Plus, Karateka doesn’t just break flimsy little specially-designed breaking boards. They also break concrete and other strong materials.

In fact, that was the whole purpose for the Okinawans when they first developed Karate. They were prohibited from carrying weapons by their Samurai overlords and needed an empty-handed way of defending themselves.

But, don’t forget that Karate is like a living thing. It has evolved into something else over the years. The style of sports fighting we generally see today is not what Karate looked like when it was originally developed.

Does Karate Work in a Real Fight?

Of course. Karate is very linear, the stances are deep, and everything is very controlled. But, the techniques are powerful and very effective at stopping your opponent when used correctly. So, yes, Karate techniques do work in a real fight.

Critics will say the rigidness of Karate goes against everything you need on the street. You need to react quickly and everything is most certainly NOT controlled. A real fight involves aggression, anger, fear, and other strong emotions that will affect how you fight.

Furthermore, illegal moves in Karate Kumite are the ones your opponent will be trying to throw because that’s what will do some serious damage. That’s why those moves are forbidden in the first place. But, all bets are off in a street fight.

In sum, if you try to apply Kumite rules to a street fight, you will probably lose. But if you are versatile enough, you can take the techniques you learned in class and apply them effectively on the street. Those power punches and kicks you trained countless times can do some serious damage when used appropriately.

The Karate Myth – Karate Is Bullshit

Karate is one of the most popular martial arts in the world. Even so, you’ll hear many people picking it apart and saying that Karate for self-defense is basically useless.

They’ll say things like karate is full of bullshit little forms that are boring to watch. Or breaking boards in karate is bullshit — just look at those flimsy little things! Most of this comes from the MMA/Brazilian Jiu-Jitsu crowd.

Furthermore, when competing in Karate Kumite there are strict rules that competitors must follow. Specific target areas that could cause serious damage are generally prohibited. Competitors are also encouraged to pull their punches to avoid injuring their opponents.

These rules are in place for a reason — to limit the occurrence of serious injury during tournaments or training. Critics say this is practicing for failure in a real Karate fight on the street.

You Must Train Karate Correctly

It might be surprising to know, but Karate is a very mental sport. In fact, the purpose of Karate is to teach self-control, self-discipline, and other mental attributes.

When looking for a Karate school, ask about the schools’ real-life self-defense training. Some schools have specific classes that are geared towards self-defense. They’ll talk about being aware of your surroundings, detecting and avoiding potentially dangerous situations, and how to look for escape routes.

Other schools will incorporate this mental training in their regular classes. A few schools, typically those that are more competition-focused, don’t even discuss these topics at all. If you want to learn Karate for self-defense, go with one of the first two types.

What Is the Most Effective Martial Art?

This leads us to the question, what is the most useful martial art in real life?

Experts argue until they are blue in the face. Those that love Karate will say that the powerful techniques you’ll learn in class will serve you well on the street. Critics say that Karate isn’t as effective on the street as a grappling art like Brazilian Jiu-Jitsu or Judo.

In reality, the most effective martial art for you is the one that gets your blood pumping. BJJ or Judo grappling techniques may be more effective for overpowering a stronger opponent.

But if you don’t like those arts, you won’t put in the training time. You need to find something that will encourage you to become the best version of yourself.

For those that love Karate, the answer is clear. Karate is a way of life and following that path leads to many benefits including better physical and mental health. And along the way, you’ll develop an arsenal of powerful techniques that you can use on the street to defend yourself.

For our part, we hope you never have to find out how you’ll do in a real Karate street fight. But if you do, we hope you are able to apply the principles you learn in class to get out of the situation safely.

Interested in deepening your Karate skills? Check out these 17 apps that can help!