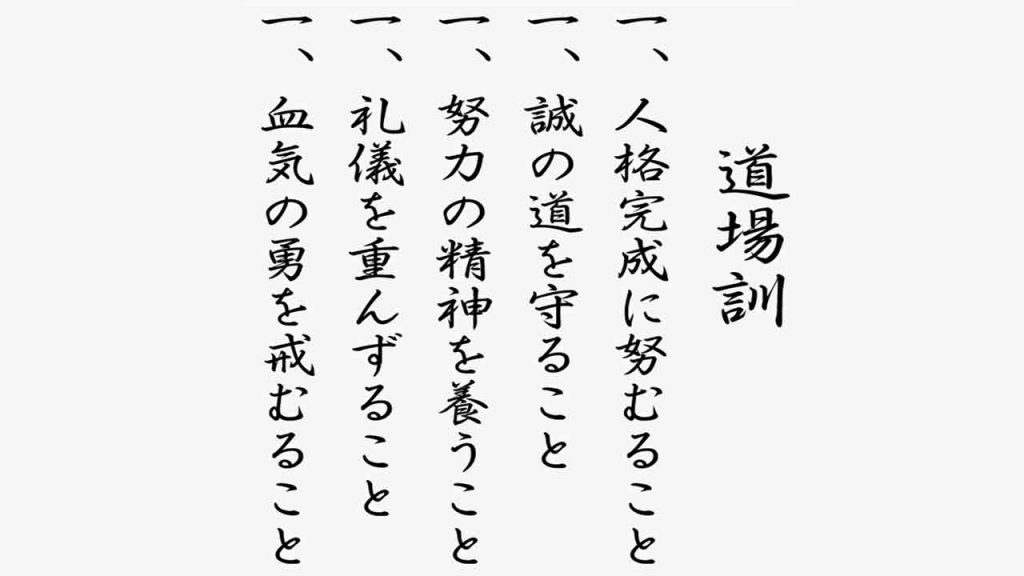 When you enter a dojo, you see a five-point statement of guidelines hanging on the walls, called Dojo Kun. However, many karate aspirants like you might know that and have a basic understanding of dojo rules. But still are not aware of the significance of these guidelines, which holds them back.

If you are a karate aspirant, it’s vital to know the interpretation and significance of the Dojo Kun before you join a dojo. You don’t need to go anywhere else for that. This article provides a comprehensive guide on the origin and meaning of the Dojo Kun for different karate styles.

What Is Dojo Kun?

The Dojo Kun (道場訓) is the foundational Karate precepts that are recited in both Japanese and English. Master Funakoshi (Father of modern karate) gave the set of karate principles. These rules serve as the guide to properly behave within and outside the dojo.

Dojo Kun is a verbal statement that all students recite, generally at the end of training sessions. Its purpose is to recall the students’ physical, mental and spiritual growth during karate training, which should not be just limited to the dojo. Instead, it must extend beyond the walls of the dojo.

The dojo’s Sensei or Sempai first recites the Funakoshi Dojo Kun. Then all the students repeat after him, preceding the final bow at the end of each class.

The Dojo Kun in English is widely adopted by the English-speaking karate dojo worldwide. Today’s English version is the imprecise translation of Japanese Dojo Kun. The Japanese version was formerly written by the forefather of Shotokan Karate, Gichin Funakoshi.

Interpretations Of The 5 Kuns

The dojo kun varies for different styles, and so do the interpretations. The translations also differ from each other. But the basic theme is quite the same.

Commonly, the English Martial Arts practitioners use the following translation of the five kuns:

The more precise version is:

The most briefest translation used in some of the dojos is:

Nearly 200 years back, to the initial stages of Okinawan karate, great masters have advised their successors with a noble list of principles. The list summarizes the philosophical and technical methods of their martial arts.

Gichin Funakoshi gave us the set of rules for the dojo and named them Dojo Kun. Dojo Kun is the brief summations of guidance and beliefs of the famous karate masters, repeated before or after practice. Let’s check them.

In Shotokan Karate (the style of karate that was developed by Gichin Funakoshi and his son Gigo Funakoshi), dojo Kun serves as the collection of five guiding principles recited at the end of training sessions. The Shotokan Dojo Kun is anticipated to frame the practice within a proper context.

The five Dojo Kun are;

Every individual must strive for the perfection and completion of their character.

Everyone must be sincere and protect the way of truth.

Every person must cultivate the spirit of effort.

Everyone must respect other individuals and the rules etiquettes of the dojo.

Everyone should maintain self-control and avoid impulsive and harsh behavior.

In Goju Ryu (the main traditional Okinawan Karate style), there are 8 different Dojo Kun published on the wall of their dojo.

The Dojo Kun of Goju Ryu is as follows;

1- Hitotsu: Be polite but do not be too modest.

2- Hitotsu: Be courageous and consider your physical strength while training.

3- Hitotsu: Practice sincerely to train your body and soul.

7- Hitotsu: Make every effort to reach the heart of Goju Ryu.

The word used at the beginning of every rule, “Hitotsu,” means “first.” It interprets that irrespective of being followed as listed, no rule is more important than another.

The Dojo Kun in Ryu-te is similar to those, which are used in the Shotokan Karate. The interpretation of Dojo Kun in English is as follows:

1- Striving to keep up the good moral character.

2- Be sincere and honest.

3- Develop determination through a will for striving.

4- Be humble and respect others.

5- Put away anger and violence through spiritual attainment.

The Shito-Ryu Dojo Kun has the following rules;

Every individual must struggle to make one’s character perfect.

Every person has to be faithful and trustworthy.

In every individual, there should be a spirit of effort.

It’s essential for every person to respect others and follow dojo etiquette.

Every person should restrain himself from expressing aggressive behavior.

The Budōkan Karate Dojo Kun has four rules. Which are;

1- Be honest, courteous, and respectful towards others

2- Develop confidence in yourself by means of knowledge, honesty, and strength.

3- Avoid violence by any means

In Bushido Dojo Kun, there are five rules.

2- Be courageous. It’s curtailed because winning spirit is a trait of a fighting man.

3- Valor is a characteristic to be appreciated and cheered for in the modern warrior.

4- Be faithful and loyal in keeping your word

5- Simplicity is a virtue of a samurai

The article highlights the significance of five-statement Dojo Kun guidelines, which are must for a karate student. Moreover, we have also provided you with a detailed guide on different styles of Dojo Kun and their key significances in both English and Japanese. Hope you have found it valuable.