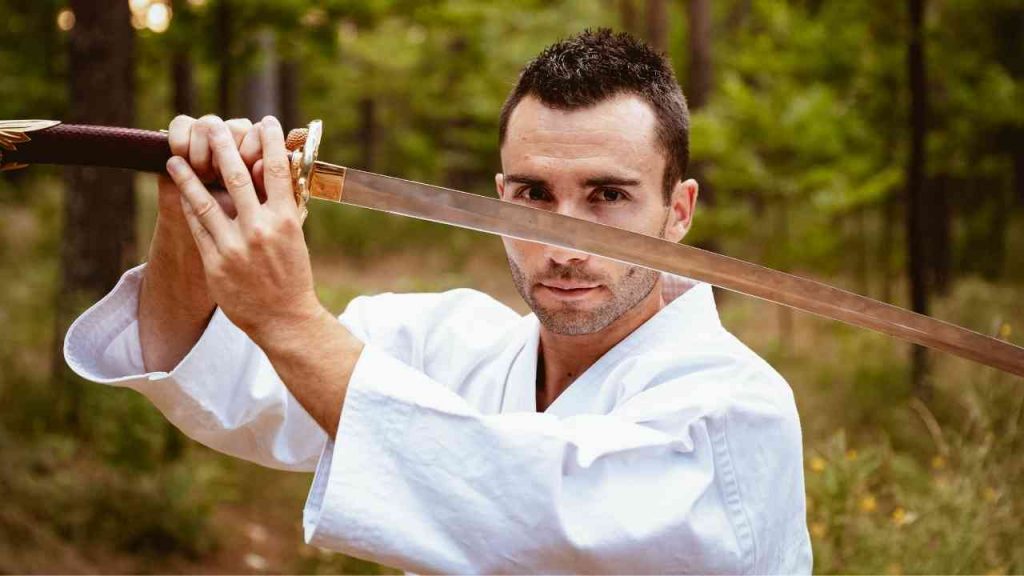 Do you know the Japanese, specifically their warriors, had followed Bushido rules throughout their history?

The Bushido code emphasizes eight virtues that you can follow to live a balanced life in its most modern time. The article will provide you with everything you need to know about the Bushido code, history, and modern Bushido. So let’s dive deep into it.

What Does Bushido Mean?

The term Bushido originates from Japanese roots “Bushi” meaning “warrior” and “do,” meaning “path” or “way.” So Bushido means “way of the warrior.” It is also known as “The Samurai Code of Chivalry.”

What is The Bushido Code?

The Bushido code is a set of rules that Samurai warriors followed during the eighth century till modern times. The laws of Bushido focus on honor, courage, skill, and loyalty above everything. However, the codes of Bushido evolved throughout the different regimes. It has remained an unwritten code of conduct for a longer period. The tenets of Bushido were formed for the first time into law under the Tokugawa Shogunate.

What are The 8 Virtues of Bushido?

Bushido rules are not a sort of religious belief system. Rather are principles that explain how warriors should balance their lives. Nonetheless, some historians and philosophers still have different perspectives on the code of the Samurai.

Here goes the list of eight virtues of Bushido:

After feudalism weakened and peace prevailed, warriors moved toward gentle arts. Even then, a man of rectitude was more prestigious than any other who has learned any skill. For a samurai, it’s a must to have.

Nitobe considered Courage-Yu as a virtue only if it was practiced in the path of righteousness. Samurai believe in two main concepts: bravery and courage. According to them, through training and exercise, we can emulate these among youth. In his Analects, Confucius says, “Perceiving what is right and doing it not reveals a lack of Courage.” Simply, it means doing things that seem right.

Mercy or Benevolence–Jin is one of the highest regarded bushido tenets. Samurai possess physical and legal power. Instead of exercising power, they should show mercy and benevolence. Love, care, sympathy, and pity are some traits that a Samurai must look after. Confucius and Mencius often said, “Benevolence is the highest requirement any rule can ever have.”

Respect-Rei in its highest form symbolizes love. It is one of the typical virtue of the Japanese that means acknowledging others’ beliefs and values. Nitobe defines it as a sincere effort to display concern for others.

One must be polite and courteous towards the feelings of others. A true warrior should be respected by not only his battle strength but also his code of conduct.

Honesty-Makoto means sincerity and trust. Samurais were very honest in their dealings. They never wrote or signed any written contracts in their lives, which proves their honesty. They remained true to their words. They believe honesty develops integrity in the true sense of character.

The Samurai code of honor-Meiyo symbolizes dignity and worth for their warriors. Mei represents ‘reputation’ while ‘yo’ means ‘to praise.’ Samurais, in the name of honor, can take their own lives, i.e., seppuku. The virtue of honor was the first to inculcate in the minds of young ones.

Loyalty-Chuugi is the dominant feature of Samurai where’ Chuu’ means “to be loyal” while ‘Gi” defines a duty. It was a paramount virtue seen during the feudal period – to remain loyal to their superiors. Bushido believes that since the individuals belong to their state, they should be loyal to them. And are always ready to live and die for its legitimate authority.

Character-kanji means to develop a good character and strong control over your emotions. This virtue teaches you to live your life as per moral standards. Understand what’s right and what’s wrong, and what’s the difference between good and bad.

Like all other virtues, the Japanese follow it wholeheartedly, that if there’s any hard and trial time, they don’t lose the smile on their face.

Moreover, they mainly focus on character building; even it holds primary importance in their education. For them, intelligence, prudence, and dialectics were secondary.

History of the Samurai

In this section, we will discuss what Samurai were and what code did they follow? Where do Samurai come from? We will also check what the purpose of Samurai was.

The word Samurai means ‘one who serves.’ Samurai refers to the provincial warriors who rose in Japan during the Kamakura regime (1192-1333). In the twelfth century, they established the first military dictatorship. During their regime, they followed the code of ethics, which we call Samurai beliefs or now what we refer to as “Bushido Codes.”

In the thirteenth century, during the era of Muromachi (1338-1573), Zen Buddhism influenced the bushido way of the warrior. The ideal warriors held paramount importance to bravery, honor, and loyalty more than his life. If somebody is defeated or dishonored, then it gives an alternative, i.e., suicide. If you commit suicide, then you can regain the honor. It gave rise to a tradition named seppuku.

Then started the era of Tokugawa (1603–1867). Under Tokugawa, the Samurai governed peacefully through civil means. The principles of Confucianism and Buddhism prevailed throughout. Samurai were forced to take some position in bureaucracy or trade. The economic stability of many Samurai weakened as their stipends declined.

As Samurai became financially weak, they took part in a revolt against Tokugawa. The restoration of the Meiji was followed by that. In 1868, during the Meiji era, the Samurai class lost its power completely. That gave rise to the end of feudalism. Emperors replaced the feudal.

Though the term bushido did not appear in the literature until the 16th century, it prevailed long before in the history of Japan. The book titled “Kojiki” in 712 C.E, provides evidence of Bushido in the form of use of swords. After which, an early history of Japan written in 797 C.E gives a clear indication. A section included in the book covers the year 723 C.E, and coins the term ‘bush’ referring to the educated warrior-poet ideally.

Highlights during the thirteenth to the sixteenth century

During the thirteenth to the sixteenth century, there exist clear indications of Bushido. During the Kamakura regime, it witnessed many socio-cultural practices of Bushido. Their loyalty to the family, rulers, and military remain dominant. They also showed martial skills. It also set the idea of skeppu during this period.

Highlights by the mid-sixteenth century

By the mid-sixteenth century, after Muromachi, Zen Buddhism and Confucianism influenced the Bushido practices. Samurai, following the warrior code, adapted the gentry’s practices. Apart from the warfare, they got instructions to live a just and ethical social life.

Kōyō Gunkan documented the term Bushido for the first time in history. The document stated the records of the military actions. The manuscript also discussed the Bushido ideals.

Bushido code in the eighteenth century

The Hagakure, composed in the eighteenth century by Tsuramoto Tashiro, depicted the Bushido code. He focused on the military and socio-cultural aspects of Bushido.

Another philosopher Yamaga Sokō says that the Bushido code doesn’t revolve around the central concept of martial skill and death. While it’s the responsibility of warriors to achieve personal excellence.

During the seventeenth to mid-nineteenth century, Japan appraised an era of peace. This piece led to the newly reformed Bushido codes. In the twentieth century, the most recent virtues of Bushido are interpreted by Inazō Nitobe in Bushido: The Soul of Japan. He mentions the ‘Seven Virtues’ to which Samurai cohered.

The Meiji restoration led to the end of the samurai ruling class. Japan trained a modern army. So what happened with Bushido then? Does it end with Samurais? No. In fact, it continued throughout the history of Japan until now.

When Japan got defeated in the Second World War, it seemed samurai values had ended. However, people started using Bushido after the country became a superpower in 1980. It symbolized hard work, devotion, and loyalty to the ones whom they worked for.

You might be wondering how Bushido affected modern Japanese culture in the 21st century.

Well, today, it has paved its way to entertainment, sports, and medicine. In sports such as baseball, Japanese baseball calls out their players as ‘Samurais.’

They often use this term to indicate fair play, hard work, and true team spirit. Martial arts in Japan has transformed from ‘Bujutsu’ to modern ‘Budo’ due to Budisho spiritualism. It is mentioned in an article In Kata – The true essence of Budo martial arts? By Simon Dodd and David Brown.

The Japanese virtues hold significant relevance to the medical profession as well. The staff has to maintain a code of conduct similar to the 8 virtues of Bushido like a doctor remaining loyal, devoted, and respectful to the patient.

Both Japan and Europe have gone through a feudal period. They set guidelines for their warriors. The Japanese adopted Bushido while Europeans formed principles known as chivalry.

In Europe, churches created the role of chivalry. Chivalry safeguards the Church from being the protector of the Church. At the same time, Bushido remained a part of the culture that harmonizes religious practices with it.

Bushido has been seen throughout the history of Japan, from military practices to their social culture. However, it has evolved during different eras of the region. Yet even today, it is deeply rooted in modern Japanese society.

Like true nations who preserve their history, Japan also expresses the codes of Bushido to strengthen its citizens and culture. Even its practices are applied to the corporate sector to get the most out of it.