The Most Comprehensive Karate Dojo Etiquette 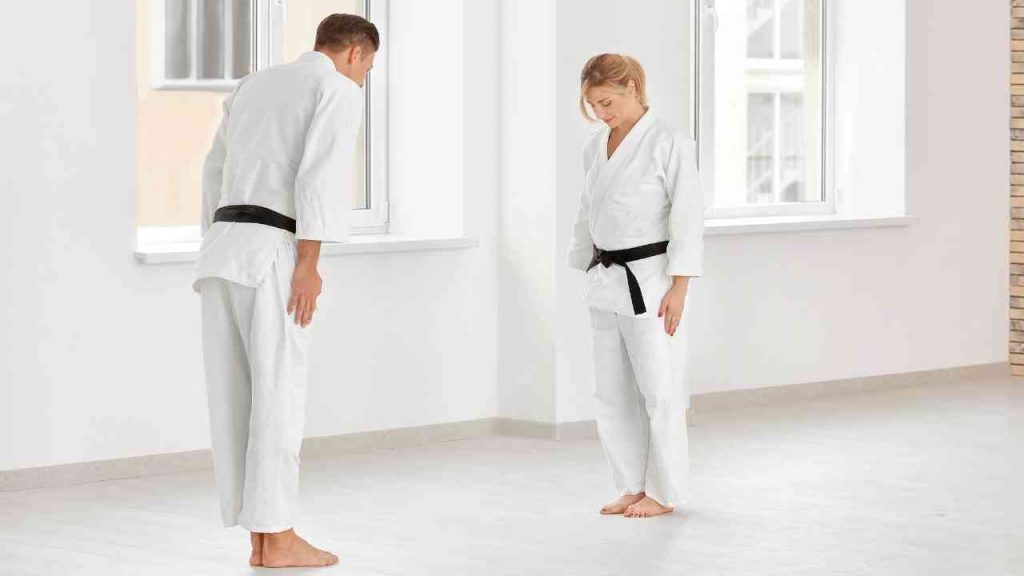 Japanese have always been following dojo etiquettes like a holy word. Well, they do that because discipline is what matters the most.

Karate is not only a sport, it’s a way of life. It teaches us how to respect others while training in a group. So, etiquette is a must-to-follow thing if you want to learn any of the karate styles. Your technical skills define your caliber in karate, while your etiquettes show your character as a karateka.

If you want to learn dojo etiquette, then the article is going to help you. It’s a comprehensive guide showing everything you need to know about karate discipline and dojo rules.

Let’s check them out!

What is Dojo Etiquette / Karate Etiquette?

A dojo is defined as a hall or a room dedicated to martial arts or judo training. It’s a place where both the students and the instructors put great emphasis on certain moral values. A real dojo is a place of respect, discipline, structure, and self-control. These things are the heart of all the karate styles and martial arts.

Dojo etiquette is a subset of Dojo-Kun. It’s a set of rules that are supposed to be followed in a karate training hall. The goal is to help karateka or other people maintain discipline in their lives.

If you’re new to karate, you might don’t know what to say when you bow or when you’re late,  don’t worry, if you learn these dojo etiquettes, the training place will become your next home.

Stick with us till the end to know more about Dojo etiquette.

When entering or exiting the dojo, you are required to do a standing bow, facing the dojo. Standing bow is the bow done by bending from the hip and keeping the upper body straight. For doing a standing bow in seiza, you need to stand with your heels together and your feet, facing slightly outward.

Keep your knees in a straight position along with your elbows, and relax. Keep your hands open with fingers together at the outside of your legs. At 20 degrees forward, bend at the waist and then unbend. If you learn the technique, doing the whole seiza bow won’t take you more than a few seconds.

Seiza is the formal way of sitting in Japan. Kneeling in the seiza is done by folding both the left knee and right knee on the floor and sitting with a straight back. Make sure your shoulders should be relaxed and the chest is out.

The left hand should rest on the left thigh and the right one on the right thigh, and the fingers pointing inward. The kneeling is done during both the opening and closing sequence, when the sensei commands “seiza”.

Bowing in seiza is a traditional style of Japanese in which the upper body is bent at a kneeling position. Bowing in seiza is just sliding the left hand from thigh to floor instantly in front of the left knee. And then, repeating the same gesture for the right hand, making the right-hand move behind the left-hand motion so that hands form a triangular shape.

For showing respect, the palms should touch the floor and bow at the waist. Slide your hands back up to their former position on the thighs, with your left hand slightly behind the right one, making your karate bow perfect in seiza.

During the opening and closing sequence, in the position of seiza, you bow when sensei commands “Sensei ni rei”.

Entering And Exiting The Dojo

On entering the karate dojo, bow nicely and place your shoes in the shoe rack neatly; well, it’s the karate greeting. Carefully place your other belongings on the stand too. Go to the changing room and change into your do-gi (a uniform worn for training in Japanese karate) but keep the time limit in mind. Now, bow from your standing position towards the instructor whenever you enter or leave the trailing floor.

In the dojo, arriving late is discouraged, and it must be avoided at any cost. In case you are late, you need to complete one push-up for every minute you are late. Then, kneel by the corner of the training floor in seiza until your instructor permits you to join the class. After getting permission, bow from the kneeling position, step up and then step onto the floor.

Moreover, do not join the group when the students are already participating in some drill. And, make sure not to walk in front of people rather stand in the corner.

Upon hearing “Line up!” or “One line!,” stand shoulder to shoulder while facing the front of the dojo, in the rank order. Line up in such a way that the instructor is in the middle of the line.

If the dojo is big, you might be asked to form more than one line. In that case, you should line up such that the lines are roughly equal in length. Don’t worry. Your instructor will guide you in both cases.

Here’s how to act upon certain commands:

The closing sequence is quite similar to the opening sequence, with a couple of exceptions. After the Mokusou, recite the dojo-kun with the senior students. Recite it loud and clear. When you bow to your Sensei, say “arigatou gozaimashita,” which means “thank you.” The rest of the steps are the same.

To end the proceedings, the instructor will get up. Wait until the person to your left bows and gets up before you do the same thing.

It is crucial to show your participation as best as possible during training because it is not encouraged if you seek attention for your behavior. When Sensei is giving the instructions, look at him and do not talk. Beware of your surroundings also.

During the class, students form lines and rows according to their ranks or sometimes by their height. A tall one goes to the back so that he does not obscure the view of other students.

Correcting other students is highly discouraged in the dojo because it gives the impression that you know every technique perfectly. So, avoid it. Moreover, it can offend the other students also.

Before the class starts, the dojo is thoroughly cleaned. You are recommended to participate as much as you can. Don’t just sit back and watch the other students do that. This activity will help you understand the importance of cleanliness for both the human body and the soul.

Sparring is a common combat sports training. It’s somewhat ‘free-form’ fighting with some rules, customs, or agreements to minimize the risk of injuries.

There are some dojo etiquettes of sparring that students should follow:

An old karate master said: “Karate starts and ends with respect.” Respect yourself, your Sensei (karate instructor), and your training partners. The best way to learn dojo etiquettes practically is to observe your Sensei and Sempai (senior karate students).

To become a karateka, you need to follow each of the dojo etiquettes. It not only helps you to be good at physical training but enhances your spiritual training level too.