Jiu Jitsu vs Karate: Which Style is More Effective? 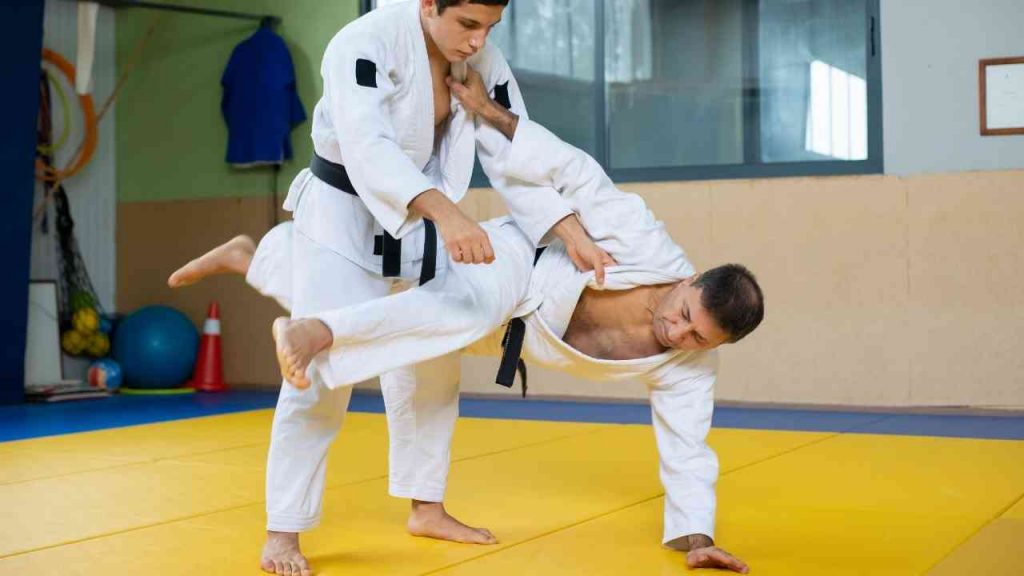 Since the inception of MMA, combat sports enthusiasts around the globe have been asking the question: which martial art style is the best? In this article, we’re going to be comparing two of the most popular martial arts on the planet: jiu jitsu vs karate.

What is Jiu Jitsu?

Jiu-jitsu is a grappling-focused school of Japanese martial arts. Dating back to the Nara period (cerca 710-794) of feudal Japan, it was originally developed as a system for unarmed combatants to be able to fight against armored Samurai warriors.

Since striking was ineffective against armored combatants, practitioners of jiu-jitsu focused on grappling techniques that could neutralize an opponent. Combining aspects of Sumo wrestling and other battlefield martial arts, the core philosophy of jiu-jitsu is to use your opponent’s force against them rather than trying to overpower them with your own.

A rough translation of jiu-jitsu is the “soft art,” with a heavy emphasis on pins, joint locks, and throws.

Today, there are many iterations of jiu-jitsu to choose from. Judo and Brazilian jiu-jitsu (more commonly referred to as BJJ) are the most popular schools, with the former being an Olympic sport and the latter being considered the foundation for modern mixed-martial arts. However, it is still possible to go to an old-school dojo to learn traditional jiu-jitsu.

Karate is a style of Japanese martial arts that directly developed from the traditional Chinese martial art of Fuijian White Crane. Its origins date back to the Ryukyu Kingdom, a series of small Japanese islands that were a tributary state of Imperial China from 1429 until 1879. When the Empire of Japan annexed the Ryukyu kingdom, migrants from Okinawa brought their traditional martial art to the main islands of Japan.

A rough translation of karate is “Chinese hand” or “Tang dynasty hand,” with a heavy emphasis on striking. While older variations utilized grappling, nowadays karate mostly focuses on punching and kicking.

Karate was later popularized in the west through martial arts movies, making it the most popular traditional martial art to this day. According to the World Karate Federation, there are over 100 million practitioners around the world.

The Differences Between Jiu Jitsu and Karate

Since jiu-jitsu is mainly focused on grappling and karate is primarily focused on striking, they teach fighting styles that are counterintuitive to one another. Below is a table that breaks down some of the main differences between karate and jiu-jitsu, BJJ.

The fundamental cores of Jiu-jitsu can be broken down into throws, takedowns, chokeholds, joint locks, and sweeps. Additionally, your positioning while grappling is essential to be able to properly execute a technique.

The aim of jiu-jitsu is to gain a superior position over your opponent to perform a submission. Practitioners can use judo throws (such as the Osotogari) or a wrestling takedown (such as a double leg) to bring their opponent to the ground.

Common types of chokeholds include the rear naked choke, triangle choke, or the guillotine. Joint locks are the second kind of submission, in which an opponent’s limbs are manipulated in ways that can dislocate or even break at the joints. Common joint locks include the armbar, heel hook, kimura, or kneebar.

The core of karate revolves around striking vital points of the body with kicks and punches, as well as utilizing different stances and blocking techniques. Targeted vital points in karate include the Uto, a spot between the eyes, and the Mikazuki, the hollow point of the throat just above a man’s Adam’s Apple.

Movement is extremely important in the execution of karate techniques, so practitioners train various steps to remain agile on their feet. Common movement techniques include the sliding step, or Suri Ashi, and the shuffling step, or the Tsugi Ashi.

There are also many stances that a karateka has to master, including the parallel stance, or Heiko Dachi, and the front stance, or ZenKutsu Dachi. By mastering these skills, karate experts can execute a range of arm and foot strikes. Common strikes include the Kagi Zuki, a hook punch, and the Mai Geri Keage or snapping front kick.

On the international level, the two most well known jiu-jitsu organizations are the International Brazilian Jiu-Jitsu Federation and the ADCC Submission Fight World Federation, each of which hold world championships annually.

Jiu jitsu vs Karate: Which style is more effective?

Both jiu-jitsu and karate are effective martial arts with a proven track record in both self-defense and mixed martial arts scenarios. Answering the question to which is more effective largely depends on the situation you find yourself in.

In the cases where grappling would be more effective, jiu-jitsu is the clear winner. However, if striking is involved, then the answer is karate.

Jiu jitsu vs Karate: Which is better for MMA?

When it comes to MMA, which is more heavily oriented towards grappling, jiu-jitsu has the advantage. The roots of MMA trace back to masters of BJJ who wanted to prove that their fighting art was the most practical. Even today, learning and practicing Brazilian jiu-jitsu is considered essential for mixed martial artists.

Current UFC lightweight champion Charles “do Bronx” Oliveira is known for his otherworldly BJJ, owning the record for most submission victories in the organization’s history. Other notable UFC fighters who are great BJJ players include Royce Gracie, Nate Diaz, and Anderson Silva.

However, that doesn’t mean that karate can’t be effective in MMA as a striking base. There have been many great karatekas throughout the history of MMA, including people like Lyoto Machida, Stephen Thompson, and Georges St. Pierre.

Jiu jitsu vs Karate: Which is better for self-defense?

In a 1v1 encounter, jiu-jitsu will likely be more effective. Statistically, most fights end up in grappling situations, as most untrained fighters will instinctually try to grab onto their opponent. Jiu-jitsu gives you a great repertoire of techniques that you’ll be able to utilize against bigger and stronger opponents, from hip throws to headlocks.

It must be said, however, that taking the fight to the ground when there are multiple assailants involved is extremely dangerous. You might be able to sweep your adversary to the ground and get him in an arm-bar, but you’ll be extremely vulnerable when his buddies start kicking and stomping on you. If it’s a 1vX encounter, you’re better off striking. So, in that scenario, karate has the advantage.

Ultimately, both jiu-jitsu and karate are effective for self-defense. Training in one or both will leave you better equipped to defend yourself in sticky situations.

Jiu jitsu vs Karate: Which is more popular?

There was a time when karate was the most popular martial art around the globe. Smash hit films like The Karate Kid (1984) popularized karate in the West, making it the most commonly taught traditional martial art in the United States until recently.

However, with the rise in popularity of MMA, jiu-jitsu has soared in recent years. Brazilian jiu-jitsu in particular has seen a dramatic increase in the number of gyms teaching it in the United States. Masters of BJJ attribute this rise in popularity to sports organizations like the UFC, since so many of their fighters are BJJ practitioners.

Below you can see a chart from Yelp that shows how many gyms in the USA are currently offering lessons in jiu-jitsu, karate, and other martial arts.

Jiu jitsu vs Karate: Which is easier to learn?

Learning any new martial art will be challenging. Mastering the skills in each fighting style will take years of dedication and practice. Whether you’re choosing to learn jiu-jitsu or karate, neither will be easy.

How quickly a student can earn their black belt depends on the individual. Generally speaking, it takes less time to earn a black belt in karate than it does in BJJ.

An adult who attends bi-weekly karate classes regularly can expect to earn their black belt within five years. However, exceptionally gifted or dedicated students who can invest more time might be able to earn theirs in as little as two years.

Compared to most other martial arts, the belt system for BJJ is incredibly strict. Because of this, the average student takes around ten years to earn a black belt. Even the most talented and dedicated practitioners can expect a minimum of five years before they are awarded with a black belt.

Jiu jitsu vs Karate: Which is better for fitness?

Both jiu-jitsu and karate are excellent choices for getting in shape.

Because jiu-jitsu is completely oriented towards grappling, there is more of an emphasis on physical strength. Being stronger can help you reach an advantageous position when rolling with an adversary.

Jiu jitsu vs Karate: Which is the better sport for you?

When it gets down to it, both jiu-jitsu and karate are amazing martial arts worth learning. They have both been proven effective in both sports and self-defense. The answer of which one is better comes down to personal style. If you’re more inclined towards striking, pick up karate. If you’re more of a grappler, learn jiu-jitsu. Either way, you’ll be equipped with great skills that will help you grow as a person.