What is Dojo? – All You Need To Know About Dojo 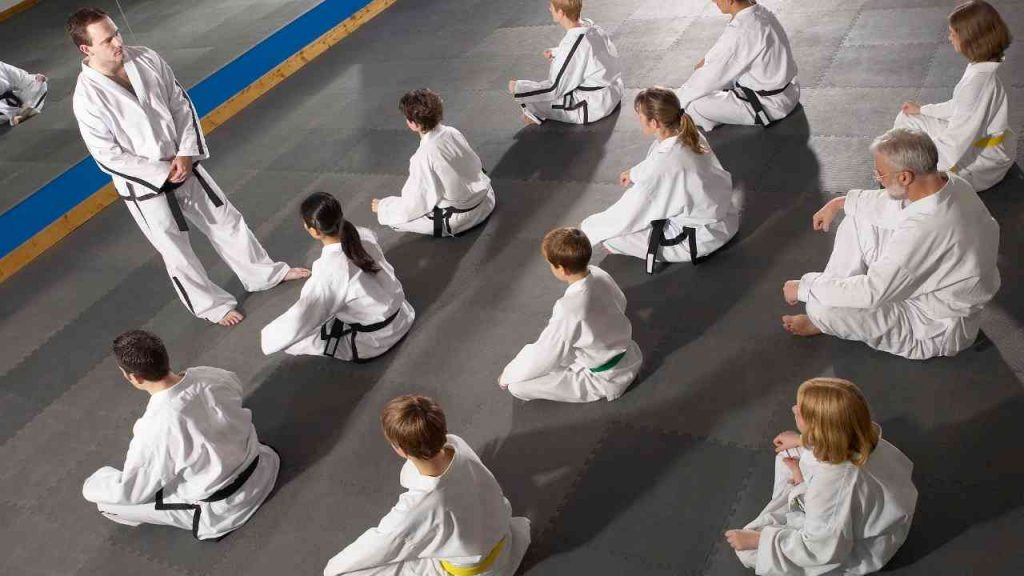 Today, many Karate/Judo/BJJ aspirants might know about Dojo but still don’t aware its actual meaning or purpose. Because it has now lost its true meaning while passing into different local languages of different communities.

Still, many people confuse it with gym or other training institutes, but it is an entirely different thing. It is a place where Karate aspirants practice and learn martial arts.

This article will break down everything you need to know about Dojo, its meaning, history, and much more. So, let’s get started.

What does Dojo means?

Dojo in Japanese is written with the characters Jo meaning ‘place’ while Do means ‘a path, way or a road.’ So, it means ‘a place of the way’.

You might think, what does Dojo stand for? In Western World, Dojo stands particularly for centers for Japanese martial arts such as Judo, Samurai, Kyudo, etc. However, in Japan, they associate Dojo with any physical and mental training facility like wrestling schools because it has roots connected to martial arts.

Some of its synonyms include ‘Akhara, Dojang, and Gelanggang’. In other countries, these terms specifically describe the Dojo of different martial arts.

Dojo is a school or hall where you can learn any martial arts like Karate, Judo, BJJ etc. It’s a place where the instructor and the student incorporate a sense of discipline. Through politeness, respect, and other moral values, which develop your personality.

You must follow certain dojo etiquette, like the bow to Dojo when you enter or leave, clean the class before it starts, etc.

Historically, Dojo traces back to the Nara period (710 A.D – 84), when this term was used for temples and private religious gatherings. Then during the Kamakura period (1192-1333), the name was used for the popular chapels for the Buddhist sects.

The word Dojo is actually Buddhist in its origin. It corresponds to the Sanskrit word ‘Bodhimanda’ that refers to a place where Buddha attained enlightenment.

Though Dojo is defined as a hall or building for martial arts. However, in the long history of Japan, it didn’t specifically indicate a building. Samurai mainly conducted their fighting disciplines outside in open spaces, courtyards, etc.

Today Dojos are the buildings or places for not only practicing Zen meditation but also for different martial arts like Judo, Aikido, Kyudo etc.

In Japanese martial arts, Japanese dojos are properly managed and cared for by their karateka. Rituals like regular cleaning, standing bow, and maintaining discipline are commonly observed. Traditionally, students enter in the left corner, with instructors entering in the upper right corner.

Most Dojo rules, also known as Dojo Kun, are followed throughout the Japanese Karate schools. Similarly, on the back walls, you can find weapons and other training gears.

Here’s a list of the most popular dojos located in Japan that teach the following Japanese martial arts:

In Korean martial arts like Taekwondo, Kuk Sool Won, and hapkido, people refer to it as Dojang. In other words, it refers to a hall for gathering students to conduct training, examination, and other related things.

Vo Doung is another name for Dojo in the Vietnamese martial arts that typically involves practicing with or without weapons.

In Indonesian Martial arts – pencak silat, dojo also refers to Sasaran. While Malaysians call it by another name, ‘Gelanggang.’

Dojang is a Korean word that refers to training hall used in Taekwondo and other Korean martial arts. In contrast, Dojo is a Japanese word that indicates a hall or room for different Japanese martial arts classes.

However, both have the same meanings, but the difference lies in the word origin I-e. Dojang is a Korean word, while Dojo is a Japanese word.

Dojo holds a central place in martial arts as it instills high moral values in your lives. It is a place open to anyone to discover the path of enlightenment. Like any other place, it is our utmost responsibility to treat Dojo with respect and care.

Whether you consider it a karate center for learning or practicing any other martial art, the real purpose is to achieve the level of spiritual excellence to polish one’s soul.