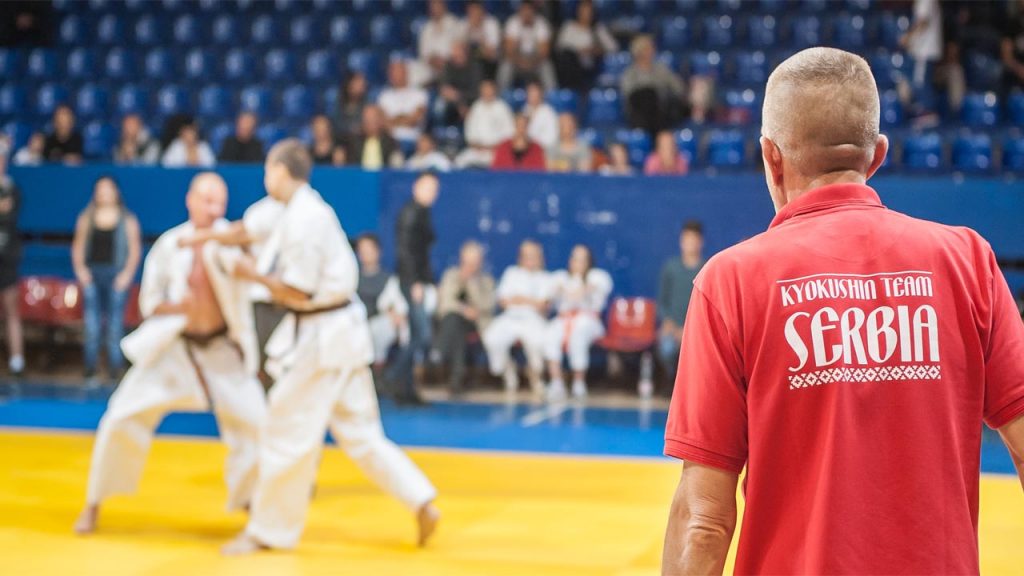 Karate originated in Okinawa around 1,300 AD, Chinese martial artists moved to the area and taught their techniques to locals.

The Japanese banned weapons in Okinawa a century later, creating a demand for unarmed fighting techniques. Multiple masters developed their own systems of close quarter combat, making ‘Karate’ an umbrella term that encompasses many distinctive styles.

As time passed, these styles and techniques were refined and further influenced by Chinese techniques. Karate became embedded into Okinawan society, so much so it became part of elementary school curriculums by the start of the 20th century.

When Japan annexed the island, Okinawan martial arts spread throughout the country and became part of Japanese culture as well, though the Japanese government only officially acknowledged Karate as a martial art in 1935.

United States soldiers stationed in Japan during WW2 brought the Karate techniques they’d learned home with them, sending the art abroad. The allure of this foreign–nay, exotic–system of unarmed combat was undeniable, and Japanese martial artists capitalized on the opportunity to share their art, culture, and heritage with the world.

Karatekas began incorporating flashier (though arguably less combat-effective), crowd-pleasing techniques in their demonstrations, resulting in increased world-wide interest in the art. This ostentatious approach is what eventually evolved into Sport Karate.

Traditional Karate emphasizes esoteric concepts like balance and a philosophy for life, while Sport Karate focuses more on fitness and competition.

Both utilize kata, choreographed forms meant to mimic an altercation, though Traditional Karate tends to utilize katas passed down through generations as both a means of honoring heritage and maintaining tradition and uniformity.

The guiding principles of the two disciplines are also different. The main focus of Traditional Karate is the “Final Blow,” which is any technique that renders an opponent unable to resist.

The final blow is most often practiced via repetition of technique or in kata, as consistent hard-sparring isn’t physically sustainable and liable to cause injury.

The emphasis on Kata can be seen as a connection to Karate’s origins, namely Chinese martial arts, which place heavy emphasis on taolu, the Chinese equivalent.

The “traditional” karateka may place greater emphasis on self-development over physical or combative development, though sport karatekas could certainly argue competition encourages personal growth as well.

In comparison to Traditional Karate, Sport Karate is a spectator sport with flashy routines and hard-hitting kumite fights. Kumite competitions see athletes fighting to knock an opponent unconscious or score points. Each attack landed can score from one up to three points, which are divided into five categories.

Yuko (A) is a straight punch to the body and worth one point. Yuko (B) is a straight punch to the head and worth one point. Waziri is a kick to the body; that’s worth two points. Ippon (A) is worth three points and is any technique judged as ‘decisive,’ based on good form and little opportunity for defense. Head kicks and any strike following a throw or sweep are generally considered decisive techniques. Depending on competition rules, fighters can win a match if they land 2 Ippon techniques.

The Reality of Traditional Karate

Though “Traditional Karate” maintains Karate’s holistic nature, many of the Kata and techniques have been lost or altered. While there are still die-hard traditionalists adhering to the classic tenants and philosophies of the karateka of yesteryear, the prevalence of traditional karate schools has dwindled greatly in recent decades, largely due to the demand for tried and proven techniques seen in MMA or sport karate competition.

As the art continues to change and evolve in relation to the times, the very existence of truly traditional dojo and styles is debatable. Not to say Traditional Karate holds no value–quite the contrary in fact!

While Different Both Have Value

There’s a strong argument to be made that a complete Karateka should study both traditional and sport variations.

Sport Karate instills the physical fitness and competitive spirit necessary for all Karateka, and kumite breeds motivation to study and improve on all facets of the game, creating a “Warrior’s Spirit” so integral to Traditional Karate as well.

Traditional Karate, with its emphasis on kata, perfection of technique, and mind-body connection is integral to a modern athlete’s success. The mindfulness and breathing so heavily emphasized in traditional karate improves a fighter’s concentration and cardio in the ring.

At the end of the day, a Karateka can only benefit fit cross-training in both disciplines!

The Future of Karate

Despite what Traditionalists say, Sport Karate is likely the future of the discipline. Sport Karate is the most widely recognized form of the martial art and even boasts Olympic recognition and a unified set of competition rules.

The modern existence of true “Traditional Karate” is debatable. While it is tragic to lose history, it must be remembered that Sport Karate will never lose its origins and still carries the lineage of Traditional Karate.

It should never be about Sport Karate vs Traditional Karate. Both are necessary for the development of a true Karateka, and both are paramount to success in and outside the ring or dojo.