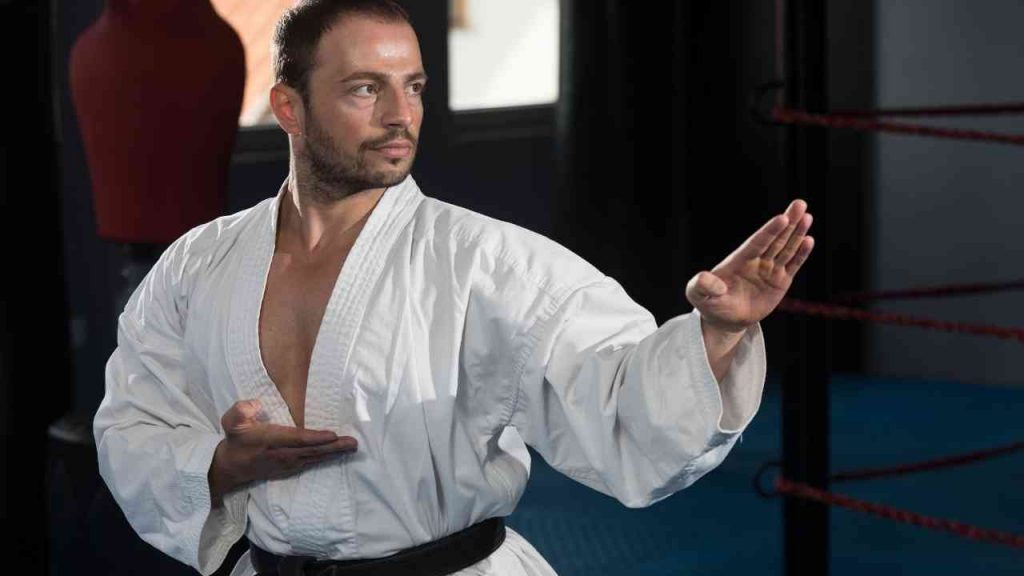 Karate, like all martial arts, is a form of self-defense. No legitimate Karate school will teach you to go around bullying people with your Karate skills.

Instead, you will learn “Karate ni sente nashi” or in English “there is no first attack in Karate”.

However, sometimes the best defense is a good offense. When someone is coming at you, you’ll need something powerful to stop the fight. Karatedo techniques begin with a block, but they end with a formidable, hopefully fight-stopping, strike.

The basic Karate punch is one such powerful technique. But we’ve covered that in this article. Today, we’re going to address a few of the more advanced techniques you can add to your arsenal. Check them out here!

It might surprise you how many different ways you can use your hands to attack your opponent. Different striking surfaces will have different effects.

For example, a closed hand technique to the temple could end in a knockout. But if you don’t want to hurt your opponent, you might choose an open-handed slap instead.

You can also use different striking surfaces to your advantage as you move about during the fight. A straight-on Karate punch won’t always be possible, but you might be able to step into a spinning back fist instead.

The whole idea is to give Karate students an arsenal of options so that no matter the situation they face, they have a technique to match.

Think about Karate basics — you put your whole body into the movements. In general, you will never just strike with your arm. That type of strike will be weak and largely ineffective. To land powerful blows, you have to put something more behind your strike techniques.

In some cases, this will be a movement with the hip similar to that used in a basic Karate punch. Others may require movement (such as the spinning back fist) to add momentum to the strike.

Regardless, always remember that your body is stronger than your arm by itself. To pack a truly powerful punch, you need to put your whole body into all martial arts strikes.

Not all hand techniques have to be closed-fisted Karate punches. There are a variety of open-handed martial arts techniques that are useful in various circumstances.

The palm strike is a very useful strike. The basic movement is similar to a punch, but instead of a closed fist, the hand is open.

The striking surface is the meaty part of the hand right between the hollow in the palm of your hand and the wrist. The fingers may be fully extended or bent to touch the inner part of the knuckles. Make sure to extend the heel of your hand forward to avoid striking the fingers.

It’s harder to hurt yourself with this strike than the basic martial arts punch, making it a favorite for lower-level students. It is great for knocking your opponent’s head back and thus unbalancing them.

Here’s a quick demonstration of the palm strike.

Hiya! Karate chop! I know, you’ve been waiting for this one. The knife-hand strike or shuto strike is the classic Karate chop we all know and love.

The hand is held open, with all the muscles tense. The striking surface is the knife edge of the hand, the section between the base of the little finger and the wrist. The palm of the hand may be facing up or down, depending on the direction of the strike.

With conditioning, the muscle becomes hard and strong and no one will enjoy a well-placed strike.

Check out this demonstration and explanation.

The ridge hand strike is the opposite of the knife-hand. The hand position is the same, but the striking surface is now the side of the knuckle on the thumb side of the hand.

This strike is less common to use and sometimes only taught to higher-level students. It can be easy to hurt yourself with this attack. The thumb must be properly tucked under and the strike properly placed, otherwise, you could damage your hand.

The movement for a spear hand strike, or nukite strike, is the same as a punch. However, the hand is held open as described for the previous two strikes.

You have to carefully choose your target or you run the risk of breaking your fingers. Even so, the technique requires conditioning and practice for safety’s sake.

The eyes and throat make great targets, but even just 1 inch off the target could have painful consequences for the attacker.

Check out this quick demonstration and explanation.

The backhand striking techniques use the back part of the hand. Techniques can be performed with the hand open or closed.

A back fist strike or backhand punch often goes to the temple, jaw, side of the neck, or another lateral target. It is often used as a correction when a punch missed its target or was evaded or after executing a block.

With the arm already extended, you can pop your opponent quickly with this technique. The striking surface is the back of the hand with an emphasis on the back of the same two knuckles you use for punching.

Check out the powerful back fist strike here.

This backhand blow is far more powerful than the last one. Use the same hand position and the striking surface is the same. However, the execution is different.

You spin backward into this strike, adding a considerable amount of momentum and force to the blow. A properly placed backhand strike to the temple is more than enough to drop an opponent.

Check out this compilation of spinning back fist knockouts!

A backhand strike or open back strike is performed with the hand open in the knife-hand position. In essence, it’s a reverse slap.

This strike is often used as a warning to the opponent, rather than trying to do serious damage. However, a backhand strike in the right place (such as to the groin when trapped in a bear hug) will make your opponent dance.

Check out this backhand demonstration and explanation.

The elbow is pointy, hard, and it really doesn’t sound like fun to get hit by it. The only thing tricky about it is that you have to get close enough to make the strike. However, as you might imagine, a well-placed elbow strike is devastating.

The rising elbow comes from below, often aiming for the underside of the chin. The striking surface is the side of the elbow/forearm bone on the little finger side of the hand.

Here’s a quick demonstration and explanation.

A side elbow strike goes straight in with the point of the elbow but the striking surface is the broad area on the back of the elbow. To both add power and get in close enough, it is often accompanied by a step or slide. The solar plexus is an excellent target for this technique.

See this strike in action here.

The back elbow strike uses the same striking surface, but you are thrusting the elbow behind you instead of to the side. This technique is useful when your opponent is behind you, such as when trying to choke you from behind.

See a few variations in this demonstration.

If you thought Karate was all about the famous punches and Karate chops, you might be a little surprised by now. There are many ways you can attack your opponent. As you continue on your martial arts journey you will learn many more strike techniques.

You will also learn the appropriate ways to use each technique. Plus, you’ll spend many hours conditioning your hands and arms so you won’t hurt yourself if you have to use these Karate strikes in combat.

Remember, a true Karateka doesn’t go looking for trouble. However, they certainly know how to handle it if trouble comes looking for them.

Interested to learn about the all-important Karate blocks? Check out this article!