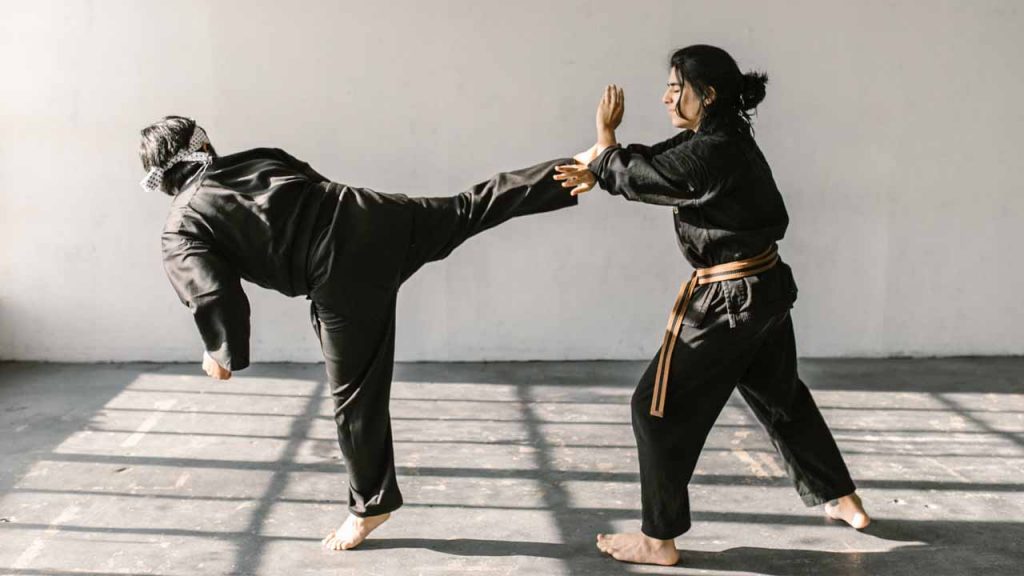 Is karate getting lost in the shadow of the next big thing?

For decades, karate has enjoyed the spotlight when it comes to martial arts. With the release of movies like The Karate Kid, the word karate became basically synonymous with martial arts. In other words, whether the fighter was using tae kwon do, kung fu, or krav maga didn’t matter, the average person would still call it karate when they saw it.

In fact, I studied tae kwon do for years as a teenager and my mother could never get over calling it “karate class.”

But is MMA finally bringing karate down both literally and figuratively? Are the techniques used by these fighters better than karate techniques? Let’s find out.

We’ve talked about the origins of karate in other articles, so we’ll be brief here. Karate didn’t get its name until 1936, but the techniques in various forms have existed for centuries. On the island of Okinawa, the villagers learned different techniques from Kung Fu and other old Chinese arts, mixing and matching them with their own effective techniques for defending themselves against the Japanese Samurai.

In some ways, you can say that karate is the original MMA. In fact, it’s hard to define karate as one particular art and there are various different styles of karate that now exist.

In the present day, karate still has the distinction of being a very straightforward and linear method of fighting. This is in contrast to the circular movements of kung fu or krav maga. Furthermore, there isn’t much grappling, and Brazilian jiu-jitsu and judo fighters heavily criticize karateka for not being able to fight on the ground.

Karatekas, however, are more interested in putting their opponents on the ground. Let’s look at a few powerful karate fighting techniques that are likely to do just that — especially when used against an MMA fighter who has not taken these karate principles to heart.

Most MMA fighters’ styles are based on some mix of boxing, BJJ, wrestling, and Muay Thai. If you know anything about these styles, you’ll know there are generally two fighting distances — long and short (when talking about hand strikes). Long is for punching and short is for using the elbows.

What if you introduced a different distance into the mix? Karate has a very effective forearm strike that does just that. When you’re too far away to use wicked Muay Thai elbow techniques and too close to effectively land a powerful punch, use your forearm instead.

It is called “ude uchi”, which literally means “forearm strike.” Depending on the direction, you can drive either the inside or outside forearm bone into the side of your opponent’s neck (or another tantalizing target that is open). This unexpected strike isn’t easy to defend against and is a devastating blow.

Check out a funky demonstration here:

The first punch you’ll learn in karate class is the basic straight punch. The first kick you’ll probably learn is the snap front kick or mae geri. The second is the universally popular roundhouse kick or mawashi geri.

These techniques exist in pretty much all martial arts, but you won’t see them used in this way. And it’s a real shame because it is quite effective.

The technique consists of throwing a kick, either the front kick or the roundhouse kick. However, the point of the kick isn’t to cause damage, it doesn’t even matter if you hit your opponent.

Why? Because the kick is only a distraction to keep your opponent from noticing your straight punch jab that is following right on its heels. Land this jab at the correct spot on your opponent’s chin and you don’t even have to worry about putting much power in the punch. Even a moderate blow will send your opponent crashing to the floor.

Knock your opponent’s lights out with a well-placed “ura ken” or backfist. If you know anything about MMA, you might be objecting at this point. But MMA fighters use the back fist all the time!

They do, but not in the sneaky way that karateka do.

MMA fighters generally do two things when using a backfist. They spin and they send it out horizontally. The move is perfect for it and spinning adds power exponentially to the strike. However, it also telegraphs the strike considerably more and your opponent has time to react.

What if you popped that backfist in there without spinning? And maybe from a different angle than horizontal? Your stunned opponent won’t care that you didn’t add the extra oomph to the strike. Especially since they may be disoriented enough not to notice your next, more powerful, strike that is coming for the same spot.

Here’s a great video of both techniques!

Karatekas may not like to fight on the ground, but they certainly have no qualms about sending their opponents down there. The kuzushi waza, or backward trip, is an excellent technique that is little known outside the karate world. In other words, you can enjoy giving your MMA opponent an old-fashioned schooling with your hidden karate skills!

This technique is pretty simple, start with a right cross as if you wanted to slam your opponent’s jaw. While your opponent is reveling in your apparent miss, place your forearm along the side of their neck. Step forward with the left leg to trip them from behind.

You’ll be a little twisted up at this point, but now all you have to do is untwist and your opponent will go tumbling down. The backward force from your arm on their neck coupled with their inability to step back because your leg is in the way is an incredibly effective way to take out their balance.

Everybody loves the roundhouse kick or mawashi geri. It’s a crowd favorite and used extensively in many forms of martial arts. However, few people whip out the reverse roundhouse, or gyaku mawashi geri.

It takes a bit of flexibility to pull this one-off, but it’s worth the effort to develop that mobility.

You’ll have to turn your foot over and kick with the top of your left foot to the left (hence the need for flexibility). However, you can bet that your opponent won’t be expecting this unconventional attack!

Having a hard time wrapping your mind around it? Here’s a quick video explanation:

The Karate Kid fans rejoice! The famous crane kick that scrappy little Daniel-san uses to defeat his opponent after receiving an injury to the knee makes the list! Technically, the crane kick also exists in tae kwon do, but we’re going to call this one a karate technique anyway.

The crane kick, or mae tobi geri, is a flying kick that comes out of the one-legged crane stance that can be used as a display of vulnerability. In the movie, Daniel-san does the flying snap front kick with the same foot that he was standing on. In reality, this is incredibly difficult to do, but effective if timed correctly.

Of course, standing in the full-blown crane stance with one leg off the ground and the arms outspread does leave you open to any number of attacks. Either be very sure of yourself or use a modified version that doesn’t begin in such a vulnerable position.

Another great surprise kick is the hook kick, or ura mawashi geri (literally back roundhouse kick). Like the backfist, you’ll see this technique used considerably, but nearly always with the back foot and after a spin.

Again, use the element of surprise and whip a surprisingly fast hook kick with the front foot without spinning. Imagine the impact of someone’s heel on the side of your face…or rather don’t because that’s quite unpleasant.

In karate, the first technique you learn is the straight punch. The second is usually the front kick or mae geri. Again, you’ll see MMA fighters throwing around front kicks. However, they tend to rely on the thrusting/pushing front kicks of muay thai. Their purpose is to push the opponent away and create distance rather than cause damage.

Of course, the snapping front kick is more focused on causing damage. This kick is hard to block (although it can be evaded). However, to evade it your opponent has to see it and a snap front kick with the front leg is incredibly fast. Perfectly positioned, it lights out for your opponent.

Here’s a great description about the difference between the snappy front kick and the push.

Karate in MMA is sometimes understated. Though the art has the stereotype of being a bit stiffer than the more fluid MMA fighters, it should not be underestimated. Sometimes a bit of rigidity is all you need to effectively decimate your opponent.

Wondering how to take your karate skills to the next level? Check out some of the incredible karate weapons you can practice with!