Hiya! The Classic Karate Chop in All its Glory 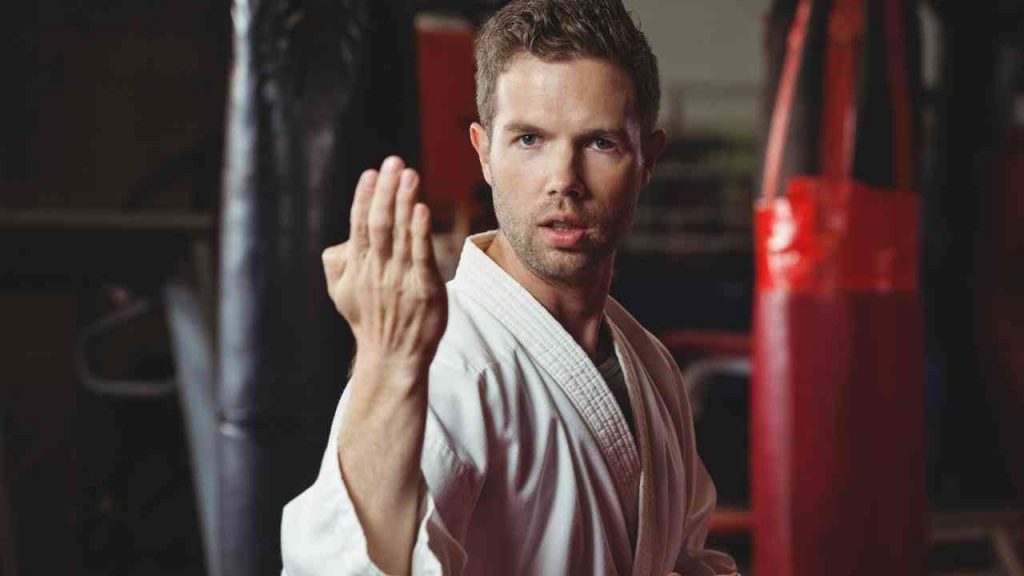 Even if you’ve never set foot in a dojo, it’s likely you have at least seen the famous Karate chop. You may have also imitated it when talking about martial arts or when making a joke.

But, how much do you really know about the classic Karate chop? Let’s learn about the Karate chop — what it is, why it’s used, and how to do it — right here!

What Is the Karate Chop?

Though laymen call it a Karate chop, you likely won’t hear this term in a dojo. This iconic move is called a knife-hand strike in English or shuto uchi in Japanese.

The term comes from the striking surface that is used. Instead of punching straight forward with the knuckles, the attacker strikes with the side of the hand or “knife-edge” of the hand The aim is to hit the target with the meaty part of the hand between the base of the little finger and the wrist bone.

This attack is favored because there is less risk of hurting yourself (as long as you keep your fingers out of the way). This part of your hand is strong and there is little to break if you strike incorrectly. The same can’t be said for your knuckles.

When students begin breaking boards, they are often encouraged to Karate chop wood first before moving to punching. This helps build their confidence without as much of a risk of damaging their hand.

The Karate chop in martial arts is used in various ways. A Karate chop to the neck is an excellent move. If it doesn’t stop the fight right there, it will at least make your opponent step back to regroup. This pause can give you enough time to get away.

Because you’re not using a bony part of your body, you can strike bony parts of your opponent’s body. In fact, the list of suitable targets for a knife-hand strike is quite long. That’s part of what makes it such a great technique. Targets include:

Furthermore, the Karate knife-hand strike isn’t only used for attacking. Virtually all of the closed-hand blocks can be performed with the knife-hand position instead.

This position gives you a couple of extra inches over a closed hand. Plus, it is perfect for when you want to grab your opponent (often the first step of a throw). Your hand is already open and you can grab much faster than coming from a fist.

How to Karate Chop Step by Step

There is less likelihood of hurting yourself with the Karate chop action. However, proper form is still vital.

Let’s begin with the hand. Hold your hand straight open with the fingers firmly locked together. Loose fingers can mean damage when you hit something hard.

Tuck your thumb under slightly and tense all the muscles in your hand. Try to raise the knuckles slightly as if you were trying to make all your fingers the same length. In this position, you’re ready to perform the Karate chop move.

Like all attacks in Karate, it’s vital to generate power in your body. You don’t just Karate chop with your hand. How you generate this power will vary depending on the direction of your strike.

For example, a neck chop is a sideways technique and you will generate power by rotating the hips. A Karate chop to the throat is more linear and might be accompanied by a step forward. The thrusting action from your hips adds the power.

See it in action and practice with this explanation of the knife-hand strike.

There is a low risk of injury with a correctly executed Karate chop. However, learning the correct technique takes a little time and practice. Plus, conditioning the hand will reduce your risk of injury even more when striking hard surfaces like bone.

Start by practicing your Karate chop on pillows. Once you get the basic move down, it’s time to move up to a target or punching bag. Striking this firm surface repeatedly will condition your hand, strengthening the muscle and bone.

Is the Karate Chop Effective?

A swift Karate chop to almost anywhere on the body will definitely give your opponent pause. And a well-placed strike to the temple can be a Karate chop knockout.

Some of the best places to hit someone with a knife-hand strike include the throat, solar plexus, and groin. These moves will stop the fight long enough for you to get away — which is the ultimate goal in self-defense.

Is the Karate Chop More Powerful Than Punches?

It’s hard to directly compare the Karate chop with the Karate punch. They are two different attacks suitable for different circumstances.

In general, it is harder to generate force for a swinging attack (chop) than for a thrusting one (punch). Of course, this varies depending on the direction of the attack.

The striking surface also plays a part in the damage done to your opponent. A Karate chop concentrates all the power of the strike to a smaller point, which is part of the reason why this attack hurts so much. It also allows you to strike smaller targets such as between ribs.

However, that doesn’t necessarily make the technique more powerful.

Suffice it to say that if you’re trying to decide how to hit someone in the throat, either technique will work great. Choose the one that works best with your position.

Can the Karate Chop Be Used in Competitions?

If the Karate chop is so effective, why don’t you see it used more often in competitions? You’ll rarely see fighters throw knife-hand strikes in MMA, UFC, or Karate competitions.

There are a couple of reasons for this. First, the throat and groin are favored Karate chop points, and both are usually illegal in competitions.

Second, many competitions use sparring gloves to protect the fighters. A Karate chop is more effective if one’s hand is not enveloped in a bulky glove.

As a self-defense technique, you can’t go wrong with the classic Karate chop. It is relatively easy to learn and hard to hurt yourself, which are both good things when it comes to defending yourself.

Did you enjoy learning about the Karate chop? There are a whole lot more strikes in Karate to talk about. Check out some of them here!