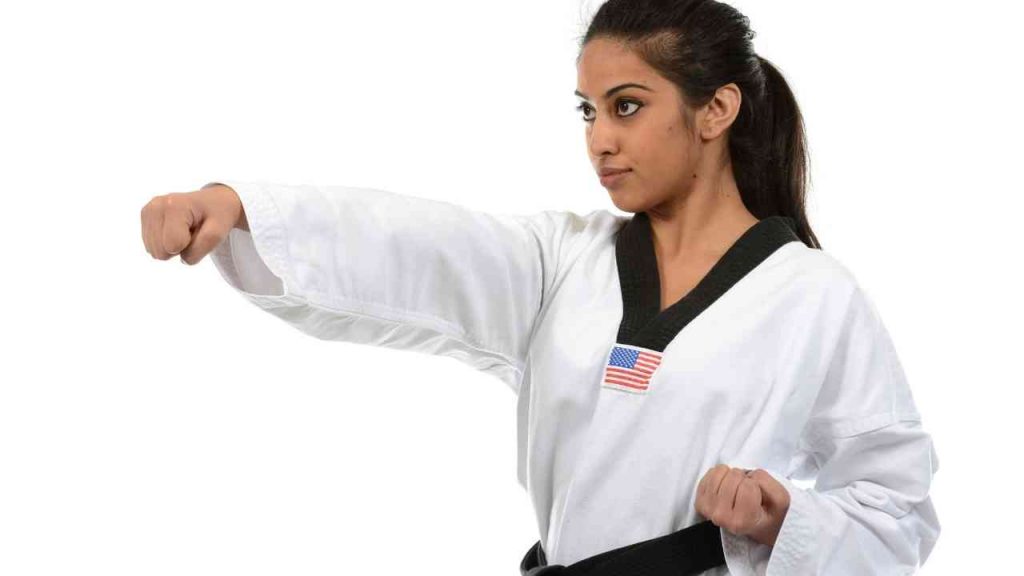 Taekwondo forms are one of the building blocks of martial arts training. They are a choreographed set of moves that help students develop strength, balance, and improve their mental focus.

Amongst the various styles of Taekwondo, there are a plethora of forms that have been developed over the years. However, there are a few that stand out as the more traditional Taekwondo forms that are more widely used and taught.

Let’s look at a list of the most common Taekwondo forms names and meanings here.

Sometimes it gets lumped in with other martial arts like Karate or Kung Fu. However, Taekwondo is distinctly Korean with its own history and development. Students must learn the Korean name for their form and recite it for the master before beginning their performance.

There are 8 core Taekwondo forms taught to color belts. The Taegeuk version of these forms is used by World Taekwondo (formerly the World Taekwondo Federation). However, there is also an older version called Palgwe that some Taekwondo schools prefer to use. Taegeuk refers to the unity of opposites or the “yin and yang.”

The first 8 of the Taekwondo forms we’ll look at are the 1-8 Taegeuk style forms. Each form represents one of the 8 divination signs in Asian philosophy.

We’ll also look at white belt forms that are taught by some schools as well as the more advanced black belt forms.

Il Jang is a basic form that puts the student through a few simple paces. It consists mostly of walking stances and front stances to train the student’s footwork.

Hand positions are simple with a few low blocks and middle punches, and a basic front kick.

Watch Taekwondo Form 1 step by step in this video.

Foot positioning gets a little trickier. Students have to learn how to smoothly land that front snap kick into a solid, deep front stance. Plus, at one point there is a 270-degree turn that must be executed flawlessly.

Things get more exciting with Sam Jang, which represents Ra or “hot and bright.”

Sam Jang takes the student to the next level with some combination techniques. For example, the student must execute a front kick followed by a punch with either hand before moving to the next position. Knife hand strikes and knife hand middle blocks are introduced.

The Sa Jang form represents thunder or “great power and dignity.” Double knife-hand block and strikes are used in this form. The sidekick also makes an appearance as well as the back fist.

There is a lot of movement in this one, which means the balance challenge increases. Students must focus hard to stay on track.

Oh Jang represents the wind which is characterized as both a mighty force and calmness. There are several combo moves making use of both the hands and the feet. Elbow strikes also appear in this form and the powerful sidekick comes out to play.

The form finishes in a twist stance that challenges the student’s balance even more.

Yuk Jang, the Taekwondo blue belt form, stands for water which means incessant flow and softness. You’ve heard how water is adaptable, yet strong enough to carve out a rock.

Chil Jang, the Taekwondo brown belt form, represents the mountain, which stands for ponder and firmness. The footwork starts to get trickier, which only improves the student’s movement and balance.

This final color belt form represents Kon which is the earth (yin). The forms aptly begin with heaven (yang) and end with earth (yin).

This is the most complicated of the Taekwondo forms in order. There are multiple combo moves, including jumping kicks that challenge the balance and flexibility of the student.

Some schools also teach Taekwondo white belt forms to beginning students. Kibon 1 or Kibon Hana is the most popular though there are 6 Kibon forms in total that some schools will teach.

These forms are designed for pure beginners and focus on the simplest introductory techniques.

After the student becomes a Black Belt, there are 9 more Kukkiwon Taekwondo forms for them to learn. Koryo is the first of them. This is where the forms start looking more impressive with combo kicks and other advanced moves.

This TKD form symbolizes seonbae, which means educated man. Koryo was also the name of a key Korean dynasty during which many weaponless Korean martial arts were developed.

The word “keumgang” means diamond which, in turn, means hardness and ponder. There is a Keumgang mountain in Korea which is considered the center of the national spirit. Further, Buddha named Keumgang Yeoksa, the mightiest warrior. The name for this form comes from both of these concepts.

Balance is key in this form where one-legged stances are common as well as quick spinning movements from one move to another.

Taebaek means bright mountain and represents where the founder of the Korean nation, Tangun, reigned. It also carries the idea of the sacredness of soul and Tangun’s humanitarian ideals.

This advanced form is full of combo moves that challenge the student’s memory and concentration while conditioning their body.

Pyongwon is a vast plain that is thought to be the source of life for all creatures. The form centers on the ideas of both peace and struggles.

This form incorporates a lot of complicated steps and movements that challenge the student’s resolve.

The word sipjin comes from the Korean philosophy of 10 longevity. This idea states there are 10 creatures of long life. These are the sun, moon, water, mountain, stone, pine tree, tortoise, deer, crane, and the herb of eternal youth.

This form uses slow moves combined with high muscle tension to develop strength, particularly in the arms. There are also rapid-fire sections where several techniques are thrown in quick succession.

Jitae means a man looking out at the sky standing with his two feet on the ground. The solitary figure struggles for human life.

Like Sipjin, this form also contains sets of slow-motion moves followed by quick bursts of action. These movements are meant to represent the struggles of human life and the fight for existence.

Correct footwork is key for proper execution of this form. A challenging jump kick near the end helps students practice balance and concentration.

Hansu means water, which preserves life and helps all creatures to grow. Thus, Hansu represents many concepts, including strength and weakness, magnanimity, harmony, and adaptability.

This form has the student moving on a diagonal, which is not super common in TKD forms. The student also moves backward quite a few times.

Ilyeo is the philosophy of Saint Wonhyo, an important Buddhist priest during the Silla dynasty. He taught the oneness of mind and body, which this form is meant to represent.

To round out this list of Taekwondo forms, we’ll mention Chon-Ji. This is the first of the 24 Taekwondo forms of the ITF (International Taekwondo Federation). World Taekwondo (WT) and the ITF are the two main Taekwondo organizations in the world.

The 24 forms used in ITF styles were developed by General Choi to correspond with the 24 hours in a day. Each form, except this first one, is named after an important person in Korean history to honor their heritage.

How many forms are there in WTF Taekwondo?

Altogether there are 17 WT (or WTF) Taekwondo forms. These include 8 Taegeuk color belt forms and 9 Taekwondo black belt forms.

What are TKD forms called?

TKD forms can be called poomsae, poomse, hyeong, and teul. You might also see these terms romanized as pumsae, hyung, or tul.

Any of these terms can be used to refer to Taekwondo forms. WT schools use the term poomsae, traditional Taekwondo typically uses hyung, and the ITF style usually uses teul.

What is the first form of Taekwondo?

The first traditional Taekwondo form is called Il Jang. It consists of mostly low blocks and middle punches performed in a front stance with only two kicks near the end. The form helps condition the student’s legs for more advanced work and perfects balance.

What are the Taekwondo white belt forms？

Some Taekwondo schools include an introductory non-belt or white belt form called kibon. It consists of only low blocks and middle punches performed in front stances.

Are Taekwondo forms effective in a real fight?

Not necessarily. Taekwondo forms follow a strict pattern and it is unlikely that your adversary will attack you in such a specific way, though some of the combinations are useful.

However, the principles learned from performing patterns in forms help immensely. Balance and strength conditioning are two important aspects for martial artists. Without these, your defense in a real fight would fall apart rather quickly.

How can I learn all Taekwondo forms perfectly?

Practice, practice, practice. Practice forms as a regular part of your martial arts training. Be fully present every time you perform the form. Take every thought, every movement captive. Focus on your balance, deepen your stances, and release your inner fire through your kihap — if you do all that, not to worry, you’ll do great!

Many students don’t take the forms seriously because they aren’t as flashy as sparring. However, this is a grave mistake. Nothing does well without a solid foundation and practicing forms provides that firm footing for Taekwondo martial artists.

Do you feel like you’ve hit a dead-end on your Taekwondo journey? Maybe it’s time to dust off the textbook and work on your Taekwondo forms. Through this practice, you’ll find yourself growing stronger, more balanced, and more well-rounded as a martial artist.

The Way of the Not-So-Empty Hand: A List of Karate Weapons