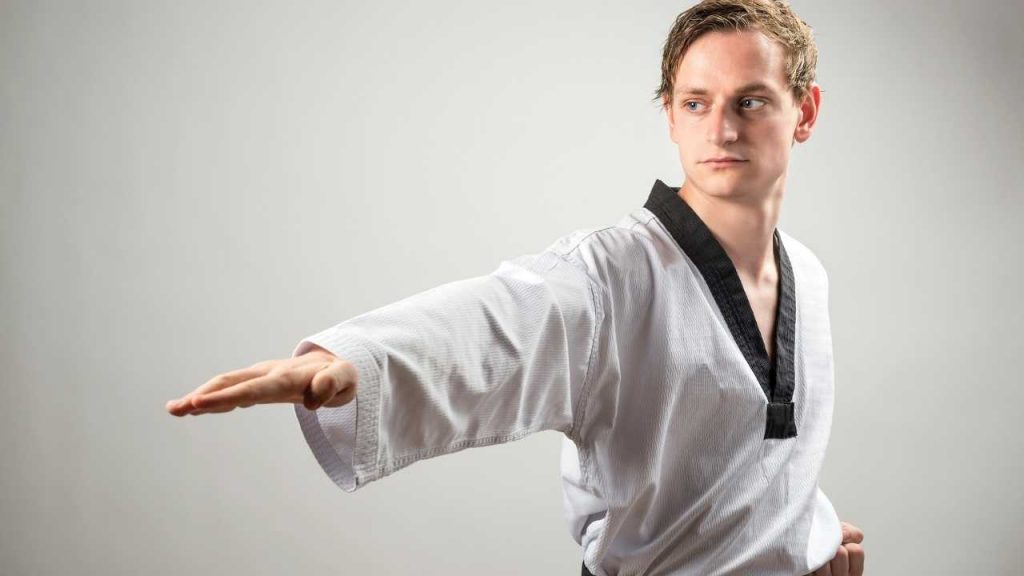 To a certain extent, as a martial artist, you’re only as good as your stance. Your stance is the foundation of your technique.

You might be surprised to know that there are many Taekwondo stances to choose from. Plus, the WTF and ITF have their own versions of some of them.

Each stance has a different purpose and a working knowledge of most of them is essential for Taekwondo study. Let’s take a look at the most common ones.

The attention stance is one of the basic Taekwondo beginner stances. In fact, it is the first stance most Taekwondo students learn.

Students are placed in this stance while receiving directions from the instructor. The instructor may also call it out at any time to get a student’s attention.

After getting the student’s attention, instructors may allow them to relax from an attention stance to an at ease stance.

Instead of having the feet together, the student may stand with the feet about one-foot length apart from heel to heel. The toes should be pointing about 45 degrees outward in a relaxed position.

The eyes are still toward the front and the arms are at the sides in a relaxed pose. Weight is evenly distributed between each foot.

Again, the weight is distributed evenly between each foot. The hands are slightly raised and at the ready.

From the attention stance, students are often asked to move to the ready stance, another of the most basic Taekwondo stances. The feet are placed shoulder-width apart with equal weight on each foot. Weight should be mostly on the balls of the feet for easy movement.

The walking stance basically looks like the student has taken a step forward. The front foot is facing straight forward while the back foot is slightly turned out (up to 30 degrees). The front knee is bent, back leg is straight.

Feet are shoulder-width apart sideways and about 1.5 shoulder width apart to the front and back. Many offensive moves come from this position.

This deep stance is used primarily for strength conditioning, though a few techniques can be thrown from this stance as well.

The feet are parallel to one another but a couple of shoulder widths apart. The knees are bent, the back is straight, and the body is lowered toward the floor in a deep squat position. The shins should stay straight and perpendicular to the floor.

Watch how to move from the ready stance to the horse riding stance here:

This stance appears in beginner forms and is useful for offense as well as conditioning. From a ready stance, one foot moves forward 1.5 – 2 shoulder widths away from the back foot. The front knee is bent into a deep lunge, the back foot turns out 45 degrees.

The weight is 70% on the front foot and 30% on the back, allowing the back foot to be chambered quickly for a kick.

The back stance moves the weight to the back leg, freeing the front leg for a rapid kick. The front foot is facing forward and the back foot is perpendicular to it, creating an L-shape with the feet. The feet are about 1.5 shoulder widths apart.

The back knee is bent slightly and this leg carries about 70% of the weight. The body is facing slightly to the side.

The tiger stance in Taekwondo is kind of a spring-loaded back stance that allows the student to move quickly forward or backward. The feet are brought closer together, the back foot is turned out only about 30 degrees and the front foot is facing forward.

About 90% of the body weight is on the back foot. The ball of the front foot is only resting on the floor. This defensive position allows the student to use the front leg quickly to defend the groin. Both knees are bent.

The fighting stance in Taekwondo is the basic stance students take when sparring and is one of the most common types of Taekwondo stances. The stance varies somewhat according to the martial art as well as the practitioner.

In general, the feet are about 1.5 – 2 shoulder widths apart and both are facing about 30 degrees from straight forward. This allows the martial artist to turn the body slightly to the side, presenting a smaller target. The knees are slightly bent for agility.

The hands are up, the chin is down, and the weight is evenly distributed between the feet. As the martial artist moves, the weight distribution moves as well to allow for quick kicks with either the front or the back leg.

Check out this demonstration of the fighting stance：

This is a stance used when moving sideways quickly. The front leg crosses over the back leg with the knees slightly bent. The lower legs should create an X shape with the shin of the back leg touching the calf of the front leg.

About 90% of the student’s weight should be on the front foot with 10% on the back. The back foot should turn out slightly, about 30 degrees.

The rear cross stance is similar but this time the back leg crosses behind the front leg. The front foot should be turned out about 45 degrees and carry almost all of the student’s weight. The ball of the back foot rests lightly on the floor to support balance.

Again, the back shin should be touching the calf of the front leg with the lower legs in an X shape.

This stance is often seen in WT Poomsae.

The crane stance is one we all know and love from the 1980s movie, The Karate Kid. Taekwondo’s version of the stance is basically the same.

All the weight is on the back foot, which is angled slightly to the side. The front foot is raised with the knee up. The stance gets its name because it looks similar to the way a crane stands with one foot in the air all the time.

From this advanced position, the student can perform side attacks, such as a sidekick. Jumping techniques can also be performed from this position.

Stand Up and Do it Right!

Furthermore, different types of Taekwondo have slightly different positioning and footwork. The WTF and ITF both have their own variations that students will learn.

We hope you have found this basic introduction to Taekwondo positions and stances interesting! Curious about other Taekwondo techniques? Check out this article detailing Taekwondo forms!