Why Do Boxers Always Hug? Clinching in Boxing 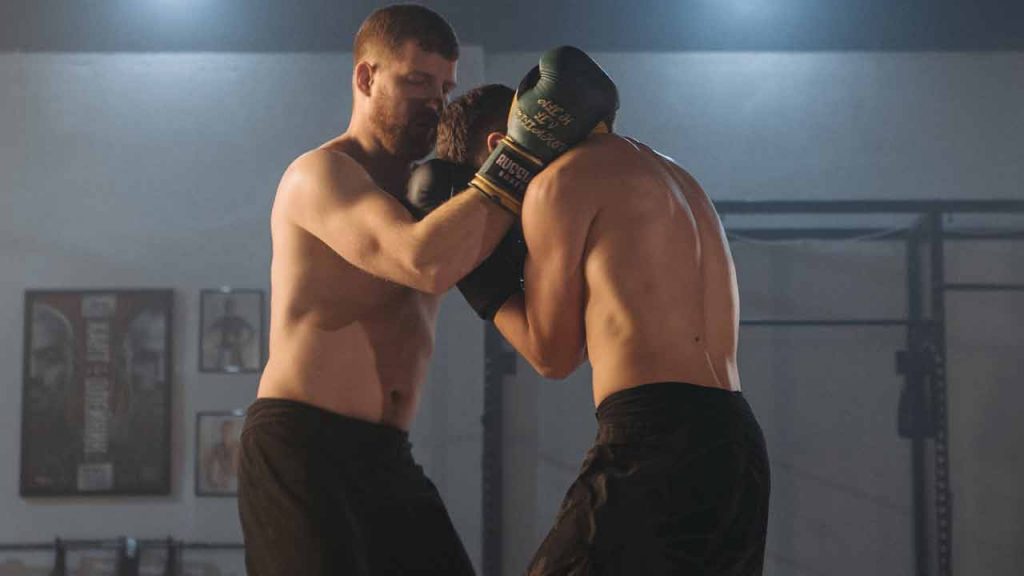 If you have watched a boxing match, you would have noticed the boxers hugging each other in the middle of the fight. Hugging is not just any kind of affection but instead, it’s a tactic.

The correct term for it is clinching and there are a few big reasons why boxers do it. While also looking at the reasons for the clinch in more detail, we’ll also look at the legalities of it and how you can use it in a fight. Let’s get started!

What is clinching in boxing?

In boxing, clinching is where you wrap your arms around your opponent to restrict their movement. This is effectively giving them a nice, big hug.

Try this with someone close to you. Give the person a hug and tell them to wrap their arms around your elbows. Try the action of punching them now. What happened?

You will not be able to punch them and therefore when boxers clinch, the fighting is neutralized. This controversial move is a defensive technique that boxers use to break their opponent’s momentum or for a pause to catch their breath.

Why do boxers clinch?

This defensive tactic enables a boxer to pin his opponent’s arms down, and any punches that land on him are ineffective. While the punches during a clinch might diminish a boxer’s strength, these do not count as points for his opponent.

It’s seen as a part of the sport but when boxers excessively clinch, then it’s seen as boring gamesmanship.

There are various reasons why boxers clinch:

Boxers do not want their opponents to find a rhythm and get caught in the wrong end of the action. If the opponent is able to bypass the defense of the boxer easily and has a building momentum into the fight, clinching becomes crucial to minimize the damage. A boxer will often resort to clinching when his opponent is on top.

If the boxer has been on the receiving end of punishment, he can clinch to his opponent until the referee steps in and separates them. Floyd Mayweather Jr. would always resort to the clinch if he was hurt or feared a counter-attack.

The power of the punch is linked with the distance the boxer can accelerate with his fist. While in a comparatively closer space, it becomes harder to throw powerful punches. If a fighter hugs his opponent, he at most receives only light knocks on his body.

Boxers make sure to lean on their opponents while clinching as it makes it hard to push back. Once in the clinch, both the boxers are hesitant to push each other away as it leaves them vulnerable. A taller and heavier boxer can tire his opponent out but rest his weight on him.

Shorter reach boxers will continuously try to close the gap between them and a taller boxer. Shorter reach boxers are at a significant advantage when up close and therefore the bigger boxer will want to clinch until the referee separates them and they can once again fight at length.

From the guidelines from the WBC, it is deemed a foul when there is “excessive holding the opponent or maintaining a clinch”. Holding is generally where you trap your opponent but with clinching you’ll still have some use of your arms.

As you can see, the wording of the boxing rules leaves it open for interpretation. The referee will allow clinching up until a point and will punish it if a boxer refuses to release the clinch when requested to.

So clinching is legal if you are not excessively doing it. It’s rare to see a referee punish a boxer for it but we’ve seen it happen many times.

How to clinch properly in boxing?

If you want to try clinching as done in boxing, it is not much of a big deal. Firstly, have your guard high and elbows very close to each other. The trick here is to move in quickly with conviction. Hook and arrest both the arms of your opponent just above their elbows and under your own.

Pull them closer, place your forehead onto their collarbone or shoulder, firmly hold them tight and lean your weight on them as much as possible. While in that position, make sure to restrain their lead leg between your legs.

Supposed to be like a heavy bear hug, this move will prevent any severe punches on your body and further can avoid an inexperienced adversary from even being able to lift their arms.

Once locked in the clinch, pause and focus on regaining your breath. Remember that clinching requires a bit of effort from your side to not give away your position. Keep pushing your head and weight consistently on your opponent.

While staying there and waiting for the referee to push both of you away from each other, utilize their movement to balance your body. A way to delay the referee from breaking the clinch is to free one of your arms and try landing punches on your opponent. Many referees will allow boxers to try and fight their way out of a clinch.

Practicing clinching boxing beforehand is vital. If not done correctly, it can give an opening for your opponent and increase the prospect of an accidental head butt or shoulder to your face.

The clinch should disrupt your opponent’s movement and momentum, so learn to execute the move according to the situation and not at every chance you get. It also becomes predictable and infuriating for the others, including the officials.

Try to develop a pattern that catches your opponent off guard, whether at the middle of the ring or on the sides. Knowing when to execute the perfect clinch further helps you win the mental battle over your opponent, and that is the job half done.

How to get out of a clinch?

Lowering your guard and freeing your arms to exit from a clinch makes you an effortless target to land punches. No matter which end of the clinch you are in, if you do not want to stay in the clinch before the referee helps you both out, there are a couple of ways to exit the clinch safely.

Boxers use their lead hand to perform this maneuver. When in your orthodox stance, which in boxing is placing the weaker left side of the body closer to the opponent and keeping the stronger right foot behind, use your left hand to grip your opponent just above the elbow.

Push their arm across your chest at an angle of 45 degrees while stepping to the left around your opponent. If done correctly, this spins both of you away from each other. Additionally, this also presents an excellent opportunity to throw a hook on your opponent.

Should boxers be penalized for clinching?

Even though clinching will not gain you any points, it is still a great technique to catch your breath and break up your opponent’s rhythm. The opinions about clinching boxing vary greatly as some believe it should be treated with the same strictness as other fouls, such as the low blow.

The general consensus is that it’s a part of boxing but the referee needs to be proactive to prevent excessive clinching. There is no doubt that fights, when both boxers are happy to clinch, can be tremendously boring.

But there’s a reason the sport is called boxing and not fighting. The aim of the game is to win the contest. If you can do that with clinching now and again, it’s seen as a smart tactic.

Clinching remains an important part of boxing. For boxers with a high fighting IQ, it can help them to win bouts as they frustrate and neutralize their opponents. For boxers who are gassed out, it’s simply an opportunity to take a breath.

Whatever your views on clinching, if you’re in a boxing match you need to know how to do it and how to stop it. With that said, what do you think about clinching? Should it be allowed, limited for each game, or be banned altogether? Let us know in the comments below!