Suit Up the Kiddies! How to Tie a Karate Belt on a Child 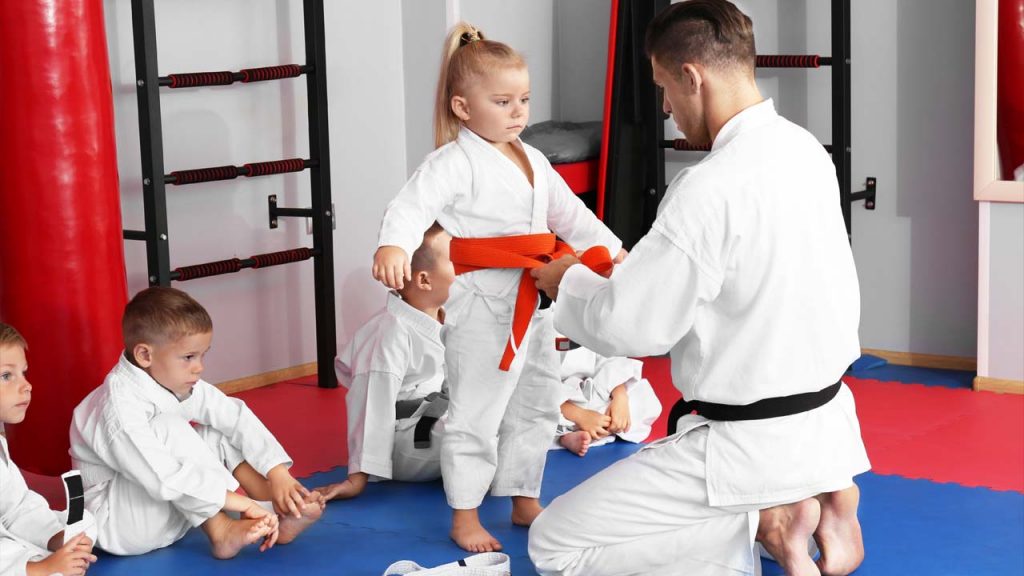 Even if you already know how to tie a Karate belt, you might find that tying it on another person is a whole different topic. After all, everything is backward! You can’t personally feel how snugly the belt fits around the waist, and children aren’t the best at explaining if something is uncomfortable.

The Importance of the Karate Belt

The Karate uniform is an integral part of martial arts training. It is designed to be comfortable and allow the practitioner to move their body freely in all directions. This freedom of movement is crucial for martial artists. They can’t kick their opponent in the head if their clothes prevent them from stretching up that high!

The uniform itself, traditionally called a gi, is pretty basic and has three parts — the pants, the jacket, and the belt.

The belt is perhaps the most iconic part of a Karate uniform. As a student progresses through the art, they will be awarded different colored belts until, one day, they are awarded the coveted Black Belt.

Different schools of Karate and martial arts will use slightly different colors, and some will add stripes to the same color belt to indicate progression. However, all forms of martial arts start their students as White Belts and award a Black Belt as the ultimate achievement.

Of course, training doesn’t stop once a student is awarded a Black Belt, and there are various levels of Black Belt through which you can continue progressing.

However, the Black Belt is the symbol that you have morphed into a proficient martial artist and a force to be reckoned with.

Whether you’re a Karate instructor or a parent whose child is a budding martial artist, you’ve no doubt seen what happens when the belt is tied incorrectly. The belt might be too loose around the child’s waist, leading to a sloppy presentation and not holding their jacket together properly.

The belt can also be too tight, causing discomfort and inhibiting the child’s ability to breathe. Obviously, this isn’t ideal when they’re trying to put their all into an active Karate class.

Finally, the belt knot might loosen and the belt falls off altogether, creating a tripping hazard and other obvious problems.

How to Avoid These Troubles

Thankfully, avoiding these troubles isn’t too difficult. It all comes down to wrapping the belt correctly, neither too loose nor too tight, and tying a tight belt knot.

Anyone can figure out that wrapping the belt too tightly will cause obvious breathing problems. However, many people may not realize that a belt that is loose enough when the child is at rest, may not be loose enough once they begin breathing heavily.

In a study done through the cooperation of two universities in Japan, researchers discovered that the 3-dimensional distance of the thorax and abdomen can expand by as much as two thirds more during heavy breathing as opposed to restful breathing.

A wrap that seems just right or even slightly loose can cause complaints from your child once they get moving.

To avoid this problem, the belt’s wrap around the child’s waist should be slightly loose. Of course, a belt that is too loose causes its own set of problems. Tie the belt so that you can fit one hand easily but snugly between the child’s abdomen and the belt.

Furthermore, the belt knot must be tied tightly enough to avoid it coming undone during heavy physical activity. Ensuring a tight knot isn’t too difficult, once you’ve made the knot, simply give the ends of the belt a couple of strong tugs to cinch it up tight.

How to Tie a Karate Belt on a Child

Tying the belt on a child is the same, but the steps will feel backward since your body is in the opposite position.

Begin by folding the belt in half to find the middle. Place this point on the child’s middle just under their belly button. Wrap the belt around their waist, forming an ‘X’ in the back and bringing both ends back to the front. The belt should lay flat and not be twisted at any point.

Bring the left side of the belt (the child’s right) over the top of the right side and tuck it up under the strap wrapped around their waist. This is a good time to slip your hand between the belt and the child’s waist to check for proper tightness.

The right side of the belt will be pointing to the left, bend it back to point towards the right. Bring the top strap down and over the right strap, then bring it up under the right strap on the left side of itself (through the loop).

Suit Up Your Kiddie!

Who knew there was such an art to tying belts? We hope this article has helped you figure out how to get your little martial artist ready for an amazing class. Now, your little one can fully enjoy their training without worrying about their belt coming undone or restricting their ability to breathe.

Interested in learning more about Karate? Here at the Karate Blog, we are a community of like-minded martial artists, dedicated to improving our art and encouraging one another along the way. Check out more of our blog posts starting with tips on how to improve your Karate faster!