Sticks and Blades Galore: The Different Kinds of Taekwondo Weapons 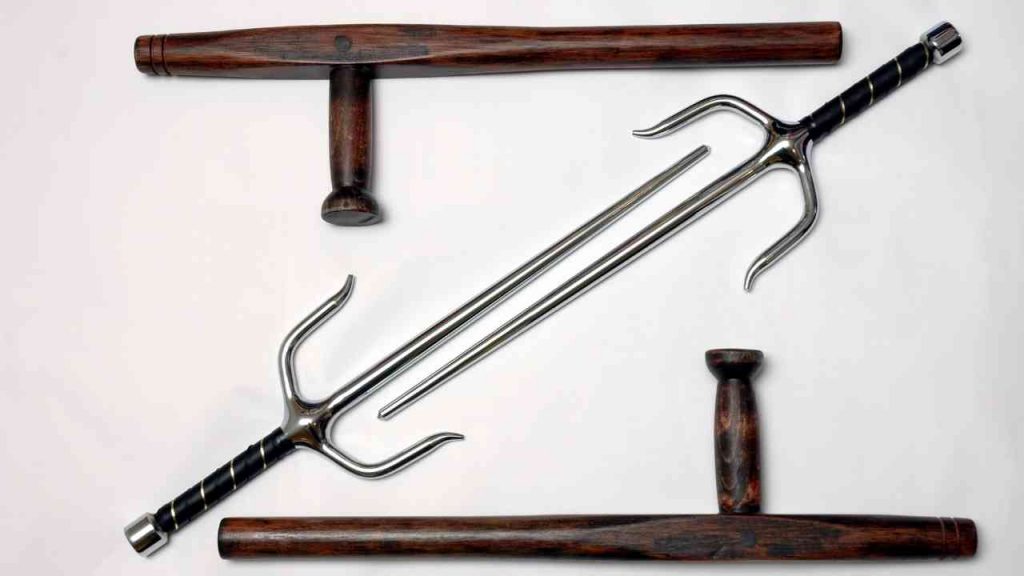 Literally translated as “the art of kicking and punching”, Taekwondo is a martial art that pushes practitioners to excel in technique and form presentation, as well as an eye-candy of a spectacle for viewers around the world to behold how incredible said kicks and punches can be (case in point: the unreal skill and choreography of The Korean Tigers).

It’s also, in the greater martial arts scene, a fairly new style, having only started roughly around 1945 as a blend of Japanese and Chinese disciplines in the wake of Japanese occupation having suppressed indigenous art styles like Taekkyeon.

So, the implementation of weapons in a system designed to hone the mind, body, and spirit has a similar trajectory, especially when the idea of stances or extension of technique is brought into play.

That’s what we’re going to explore in today’s post, which focuses on the different Taekwondo weapons as well as their storied histories. From blunt to bladed, each weapon has something to offer in a style that otherwise encourages the body acting as its own weapon. Let’s take a look at some of them!

The Eskrima martial arts style, whose name is derived from the Spanish term for fencing, is popular throughout its native Philippines, where it is the national martial art.

Also called Arnis or Kali (the latter from the Philippines Cebuano dialect roughly translated to mean “movement of the hand”), it is best known by some to be the home of the same-named escrima sticks–originally used as wooden tools for opening stuck doors or laundry.

Eskrima develops empty hand and stance combat concurrently with those of weapons like eskrima sticks and various bladed weapons, believing that hand-to-hand and weaponized combat share many similarities.

Escrima sticks play a similar role in Taekwondo, where they are called bahng mahng ee, primarily in terms of stances and weapon striking. Even so, Taekwondo puts more emphasis on parrying or removing the opponent’s weapon rather than Eskrima’s focus on striking the opponent directly (with protective gear, of course!).

In direct contrast to the eskrima being almost exclusive to the Philippines, the sai has roots traceable back to various countries throughout East and South Asia, from Thailand to India and everywhere in between (not originating in Okinawa, contrary to popular belief).

Some stories suggest that the lay people of Okinawa turned to the trowel-styled farming tools as one of the weapons to train with after Japanese officials confiscated all official weaponry around the 15th-17th centuries, while others muse that these were used baton style by said Japanese officials for crowd control purposes.

The three-pronged weapon, normally used in pairs, resembles a smaller scaled version of the tridents associated with ancient deities, like Poseidon and Triton (i.e., Ariel’s father in The Little Mermaid), or the weapon used by Shiva in Hinduism.

Its design makes it useful to throw quick and sharp stabs, disarm and trap opponents’ long range weapons while possibly breaking them in the process (think bo staffs and katanas), and reinforcement of blocks and self defense with empty hands.

Many styles, including taekwondo, apply this weapon’s characteristics in some of their formal kata/form applications or even when strengthening forearms. The three prongs make it easier for one to use the weapon in a traditional blade style designed for trapping, and flipping it on their hands to reinforce various blocks and strikes.

One can’t help but feel that this chained weapon is almost synonymous with Bruce Lee in Enter The Dragon or the esteemed Michaelangelo of Teenage Mutant Ninja Turtles fame. Even without these two paragons of martial arts fame, however, the nunchaku–or nunchucks as they’re commonly referred to–have an impressive history and usage in their own right.

In China, these sticks were used for harvesting rice and wheat around the 10th century, attached with ropes made of horsehair. A general (believed to be Emperor Jiu) who was hiding out in a village from the Mongolians noted how a group of villagers utilized the swinging motions of the tool, and developed moves that he eventually taught to his army.

Nunchucks, at first glance, don’t seem to serve a practical purpose in traditional taekwondo, though they aren’t cast aside entirely either. Their versatility and range as a weapon make them popular with practitioners honing their forms, and, when combined with hand and foot techniques, help put on a visual delight.

From being used among Japan’s own samurai to directly impacting the arts of kendo and aikido, katanas and bokken are just as much a style as they are art in the truest sense of the word. Just like with other kinds of bladed weapons, though, these two weapons follow  specific move sets that employ technique execution in tandem with unique footwork.

Historically, the word katana has always meant “sword” in Japanese, and are distinct for their curved, single-edged appearance with either a round or square handguard–meant to be held with two hands (so, no fencing).

The sharp edge of the thousands-layered steel blade is traditionally held upward in the hilt or the belt in case the user needs to draw their blade for immediate offense/defense. Most modern katana(s), however, are either designed for performance purposes or as an artistic display.

This is where the bokken comes in, as the use of it among students is deemed relatively safer compared to its bladed counterpart (for obvious reasons). Historically used by sleeping samurai to defend themselves without bloodshed, the wooden bokken(s) are excellent training tools that require minimal care and are versatile for practice and performance.

Various horizontal, vertical, and diagonal strikes are taught to practitioners wanting to learn more about the blade, with some of the footwork done simultaneously with the strikes and blocks evocative of the varied stances utilized in taekwondo.

Sais aren’t the only weapons to look like a miniature version of something larger. One look at the kamas, resembling sickles in appearance, inspires images of the grim reaper’s scythe to come to mind. While they don’t necessarily have the power to harvest souls from the bodies of the living, these bladed weapons are handy (no pun intended!) when someone gets trapped in a pinch.

Kamas have much in common with weapons like sai and nunchaku, with their origin as an Asian farming and crop harvesting tool among one of the more historical commonalities. Their development as a weapon was vastly different; in Okinawa, the blade had to be imported from other Asian nations, since they didn’t have the metals required to properly forge it.

Grip wise, it has much in common with the sai’s natural, reverse, and special grips–not to mention that they both specialize in trapping weapons and reinforcing techniques in performance forms.

However, even most modern kamas designed with a dull blade tend to be difficult to handle: The risk for injuring oneself is higher than with most other weapons (yes, even the pointy sai), and most moves within a form have a flurry of techniques attached to them.

The inspiration for modern day police batons, tonfas are yet another weapon that can be used as singles or in pairs. Like other paired weapons, the tonfa has varied applications in both form and offense/defense, which–along with its history, or somewhat lack thereof–helps to set it apart from the other taekwondo weapons.

It has a history and it doesn’t at the same time. Scholars have debated for years about the origin of the tonfa in East Asia, citing that the weapon was either a millstone grinder in Okinawa or a different tool imported from another part of the continent (Thailand or China, for instance).

In spite of this, the weapon was still incorporated into Okinawan martial arts culture, the handle being modified over time to incorporate weapon spinning.

As a paired weapon, tonfas are useful in reinforcing blocks and kicks, provides ample defense against bladed weapons, and is used for rapid twirling and techniques that come right back to the user.

It doesn’t poke or slice people like the sai or kama, respectively, but it does have its advantages in grappling: The weapon’s handles make it easier to trap someone (likely around the head) and throw them.

One of the best aspects of Taekwondo is how it adapts unique characteristics of other martial arts styles from throughout the world (mostly in Asia) and utilizes them for practical application in the development of forms and fighting.

The numerous and unique types of weapons utilized by the art best illustrate this concept, offering a bevy of ways for one to add flair to an existing technique set or to even expose themselves to the basic ideas behind using the weapons.

Did we miss any weapons? What kinds of weapons do you like to train with? Does your style have a similar or unique take on certain equipment? Let us know, and stay tuned for more new and exciting martial arts content!