Shotokan VS Kyokushin, What’s Their Difference? 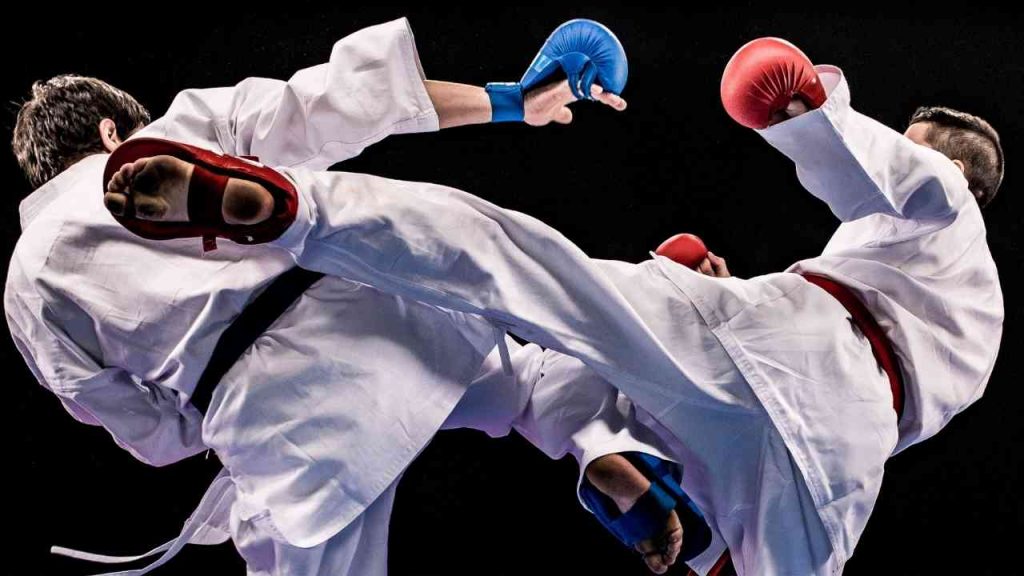 What!? There’s more than one type of Karate?

Karate began on the island of Okinawa and got its name when Gichin Funakoshi brought the martial art to the main part of Japan. From there, other masters have added their own flair and developed different styles of Karate.

Shotokan and Kyokushin are two such styles. Curious how different from each other they might be? Let’s look at how the two compare here.

What Is Shotokan Karate?

In Shotokan Karate, there is a lot of emphasis on the mental/lifestyle aspect of Karate. Students are taught to maintain a balanced mind and body.

Shotokan Karate techniques are powerful, and will easily put down an opponent when done correctly. However, in training, far more emphasis is placed on the technical aspect of the techniques rather than the power with which they are delivered.

Karateka are even encouraged to “pull” their punches during sparring (hit with less force) to help protect one another. Plus, strikes to the head, knees, and other vulnerable areas of the body are generally not allowed.

What Is Kyokushin Karate?

In this style, Karateka are not encouraged to pull their punches. Instead, you win Kyokushin competitions by Knock Out or Knock Down. Kicks and strikes to virtually all areas of the body are permitted, except to the head.

If you study both karate arts, you’ll learn mostly the same attack and defense techniques. However, Kyokushin has a more realistic take on fighting. Students spend time conditioning their bodies to receive blows and are generally better prepared for a surprise street fight.

Let’s break it down to see how they compare in specific areas.

Shotokan Karate can be considered traditional Karate. This is the style developed by Gichin Funakoshi, the Father of Modern Karate, which explains its popularity.

Kyokushin was developed later by Masutatsu Oyama. He began teaching his own style, simply known as Oyama Dojo. The style became so popular that he named it and now it is one of the most prominent styles of Karate in the world.

When training, Karateka in both styles learn a wide variety of striking techniques using both the hands and the feet. However, where these techniques are placed differs considerably.

In Shotokan, valid targets are restricted. The lower body is left alone with all strikes going to the upper body.

Kyokushin Karate techniques go to all areas of the body. For attacking, more emphasis is placed on the feet, thus students learn more kicks and legwork.

With a focus on the mental aspect of Karate study and perfect techniques, Shotokan puts more emphasis on Kata than Kumite (sparring). Both are important aspects of training, but Kata tends to shine in this style.

On the other hand, Kyokushin is more concerned with preparing the body for a real fight. Thus, Kumite practice, as well as conditioning the body to receive blows, tends to get more attention.

As you might imagine from everything we’ve talked about so far, the sparring technique varies quite dramatically between the two styles.

To protect the competitors, there are few valid targets in Shotokan sparring. Competitors are encouraged to pull their punches and points can be deducted if it is determined that you struck your opponent harder than necessary. Most techniques used are long-range and the competitors will jump in and away from each other with lightning speed.

Kyokushin sparring is full-contact with only a few restricted targets. Competitors are encouraged to strike their opponents with full force and use techniques that could knock them out. Most fighting is done at close range with an emphasis on powerful attacks.

Check out this interesting visual demonstration of the difference between these two Karate styles and their sparring styles.

Shotokan is focused more on perfectly executed techniques. After every strike, the fight is stopped until the judges determine if the strike was valid. The highest points are awarded for takedowns followed by a strike.

Kyokushin sparring is much more liberal. The goal of the match is to knock down or knock out your opponent and these techniques receive hefty points. Few points are awarded for punches or kicks.

Shotokan vs Kyokushin: Which Is More Effective for Self-Defense?

Is Kyokushin Karate effective for self-defense? What about Shotokan?

While students of both arts will learn powerful techniques for self-defense, Kyokushin is more effective on the street. Full-contact sparring and body conditioning better prepares the student for the rigors of a real street battle.

Who Would Win? Shotokan Karateka VS Kyokushin Karateka

Who would win a fight is generally more dependent on the skill of the individual fighter rather than the style they study.

However, if we had to pick one, we would put our money on the Kyokushin Karateka. For the same reason that we think it’s more effective for self-defense, we think that a Kyokushin Karateka would win the fight. This style tends to turn out better prepared, scrappy fighters.

Shotokan vs Kyokushin: Who Wins for Physical Fitness?

The two styles are pretty much equal when it comes to physical fitness. But if physical toughness is part of the equation for you, then again, Kyokushin wins the day. Its emphasis on kicks and footwork will also nudge this category over to Kyokushin.

The school where you train also has a lot to do with this. Some instructors train their students harder than others. Obviously, how vigorously you train will have a huge impact on the physical fitness benefits.

Shotokan vs Kyokushin: The Best Style for You

If you’re looking to study Karate, choosing the right style for you can make all the difference in a successful journey. Lots of experts have their opinion on which style is “better” than the other.

But your opinion is the only one that matters when choosing which style you want to train.

If you love the technical aspect of Karate, learning Katas, and striving to perfect every movement, Shotokan is the style for you. Plus, it is less likely that you will get hurt in class so you won’t have to be explaining shiners and other bruises to your boss.

If you want a real-world defense style and love the idea of testing your skills to the max, Kyokushin may be a better fit. Though the goal is to block all your opponent’s attacks, the reality is that you’ll probably have to take a punch or two to win a fight. Kyokushin’s full contact style will do a far better job of preparing you for this.

Interested in how other martial arts compare? Check out this comparison of boxing vs Karate!