Muay Thai vs Kickboxing: Which Style Wins? (Difference Between Muay Thai and Kickboxing) 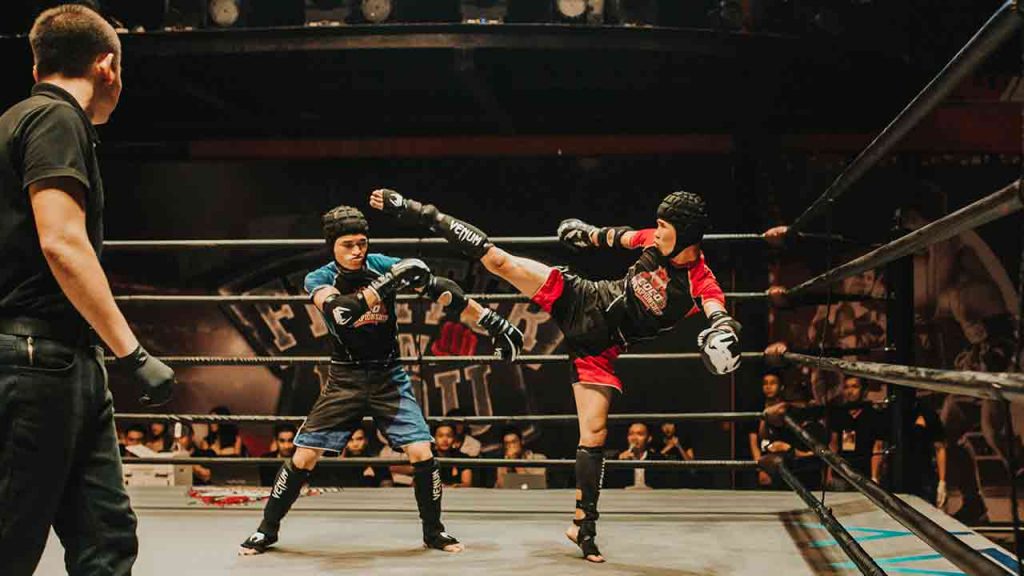 Muay Thai and kickboxing are two standup fighting styles that have gained immense popularity all across the globe in the past two decades and rightly so! Both the fighting styles appear to be similar to each other but once you take a deep dive into the technicalities, you realize that they both are pretty different from each other.

For someone who’s new to both these styles will find Muay Thai vs Kickboxing virtually un-identical to each other and this is the primary reason why I have assembled some interesting facts here to differentiate between the two.

A loud and clear, NO! As mentioned above, both these styles are fundamentally different from each other. If you watch one match each with wide-open eyes and head, you would be able to figure out the key differences very easily. While Kickboxing is a four-point striking system, Muay Thai on the other hand encompasses an eight-point striking system. This is primarily the reason why Muay Thai is also sometimes called the ‘Art of eight limbs’.

Muay Thai is also referred to as ‘Thai Boxing’ sometimes. It is basically a martial art and also a combat sport. It uses stand-up striking along with various clinching techniques. The reason why it is also called the ‘art of eight limbs’  is that it is characterized by the combined use of fists, elbows, knees and shins.

Kickboxing refers to a group of stand-up combat sports based on kicking and punching. If we trace its roots, it is historically developed from karate mixed with boxing. Kickboxing has found immense popularity in recent times because of its various practices such as self-defense, general fitness, or as a contact sport.

Difference Between Muay Thai and Kickboxing

Muay Thai is the national sport of Thailand and that should explain its English translation to ‘Thai Boxing’. Its origins take us back to ancient times as it finds its roots in the ancient battlefield tactics of the Siamese (or Thai) army. Later in the early 20th century, boxing gloves, time limits as well as a uniform set of rules were introduced.

On the other hand, Kickboxing is a Japanese hybrid martial art. It basically comprises elements of punching and kicking. It’s much more modern as compared to Muay Thai as Kickboxing’s origin can be dated back to the 1960s in Japan. During the next ten years, it gained practitioners in America.

Muay Thai is based on timing and it relies on quick and powerful counters. Kickboxing, on the other hand, is boxing based requires active hands, movements, and volume combos. Thai boxers can make use of eight limbs to strike and do damage with punches, kicks, knees, and elbows. When it comes to kickboxing, kickboxers can only use four limbs to strike with kicks and punches.

One more crucial factor that sets Muay Thai apart from Kickboxing is the frequent use of clinch work and usage of knees and elbows.  Both the fighters have different footwork too as Thai Boxers are more patient, flat-footed, and tend to keep their head in the centerline. While on the other hand, Kickboxers put a lot of emphasis on footwork and head movement. This also enables them to easily shift to boxing and vice versa.

Muay Thai vs Kickboxing: Which Style is More Effective?

If we take the broader perspective into consideration, Muay Thai is considered to be the more ‘complete’ form of martial arts and that is because it incorporates the clinch, elbow strikes, and knee strikes while kickboxing does not.

However, if you go ahead and learn both arts, it could prove to be much more beneficial than sticking to just one art form as Kickboxing also has its own set of advantages. When it comes to landing punches, Kickboxing is more effective as Muay Thai focuses more on landing kicks to the opponent.

Muay Thai vs Kickboxing: Which One is a Better Fit for MMA?

For many fighters who have already made a dent in the game, Muay Thai is considered to be superior and a lot of credit has to be attributed to the usage of clinching. Modern MMA requires a lot of clinching work and you cannot expect to be successful in MMA without knowing how to fight in it.

MMA fighters who have graced the art called Muay Thai, are much more prone to landing vicious knees to the body and elbows to the side of the head.  This can be used to either stop the takedowns or wear the opponent out.

To give you a deep insight into how crucial Muay Thai can prove to a potential MMA fighter, we need to take a good look at one of the greatest of all time, Anderson Silva. What makes Muay Thai more effective than kickboxing for an MMA fighter is that it is very useful at distance too.

But it doesn’t mean that having a strong background in kickboxing won’t assist you in any way when it comes to MMA because just like Muay Thai, a lot of MMA fighters have kickboxing classes in their weekly training schedule. It still doesn’t change the fact that it is not as useful as Muay Thai simply because it lacks clinch work.

Muay Thai vs Kickboxing: Which is Better for Self-defence?

In this day and age when viciousness is prowling on the streets in every form imaginable, it is crucial to have some self-defense tactics fed in your reflexes. Again, Muay Thai makes a better case for itself in this regard as well, as compared to kickboxing.

The fact remains the same because Muay Thai has effective punching and kicking techniques that enable you to punch and kick well as well as counter those attacks well.

It also additionally provides you with additional ways to attack which American Kickboxing doesn’t. However, when you factor in the time and efforts required to learn the art, Kickboxing makes a better case for itself as one can get accustomed to the art in a comparatively shorter span of time. If you opt for Muay Thai, you would know more about the clinch and have a longer striking range.

Muay Thai vs Kickboxing: Which Style is Better for Physical Fitness?

To be very honest, there is nothing inherent in either system that makes it a better workout, or particularly harder or easier. So if you get a chance to learn either of the arts to improve your overall physical fitness, you can blindly go with any of them. Both Muay Thai and Kickboxing require a lot of physical stamina.

Muay Thai vs Kickboxing: Which is More Popular?

In the Far East, after more than a century of development, Muay Thai became extremely popular in the West during the 20th and 21st centuries. This happened when Western practitioners that came from Thailand started using the discipline in kickboxing and MMA competitions.

This is what popularised Muay Thai in the west. Talking about the current scenario, Muay Thai has gained global recognition and is internationally governed by the IFMA.

As stated earlier as well, Kickboxing is a relatively new combat sport that found its origin in Japan somewhere near the 1950s-60s. The sport truly became popular in the United States, back in the 1970s.

The current scenario indicates that it has become a hybrid or mixed combat sport. Kickboxing too has gained global recognition but unlike Muay Thai, it doesn’t have a single governing body.

Muay Thai vs Kickboxing: Which is Easy to Learn?

Depending on which aspect of training you are learning, both Kickboxing and Muay Thai can be easy and difficult at the same time. Talking about Muay Thai first, it involves the use of all striking points through kicks, elbows, knees, and punches and this type of combat sport takes a much longer time to get accustomed to as compared to just using one form of attack.

On the other hand, Kickboxing also involves attacking with your fists and feet, it also requires you to work upon your footwork and cardiovascular training. Kickboxing also includes quick hand and head movement to avoid punches. It all comes down to how committed you are to learning both these forms of art.

Muay Thai vs Kickboxing: Which is the Better Sport for You?

As is evident by now, there is no ‘definitive’ answer to this and it all boils down to your personal preference. It depends on multiple factors such as your aptitude, circumstances, and the kind of fighting specialty you are looking for.

If we had to sum it up in just one sentence; it would be this: “If you want to learn how to strike with all 8 bodily weapons, go blindly with Muay Thai but if you’re looking for more mobility of movement, kickboxing might fit you like a glove.”

Both these martial art forms require dedication and determination and if you manage to excel in either of them, your opponent would find it very hard to overpower you. That is for sure. Feel free to check out our other articles as well!

Hi, I’m a martial arts nerd and practiced a variety of martial arts like MMA, Boxing, BJJ, and Taekwondo in the past 6 years. 2 years ago I got into the art of eight limbs. Even though I love Muay Thai best, I don't shy away from fighting on the ground. I'm constantly changing countries as a digital nomad, but when I get to Thailand I'm hoping to get in a real fight!