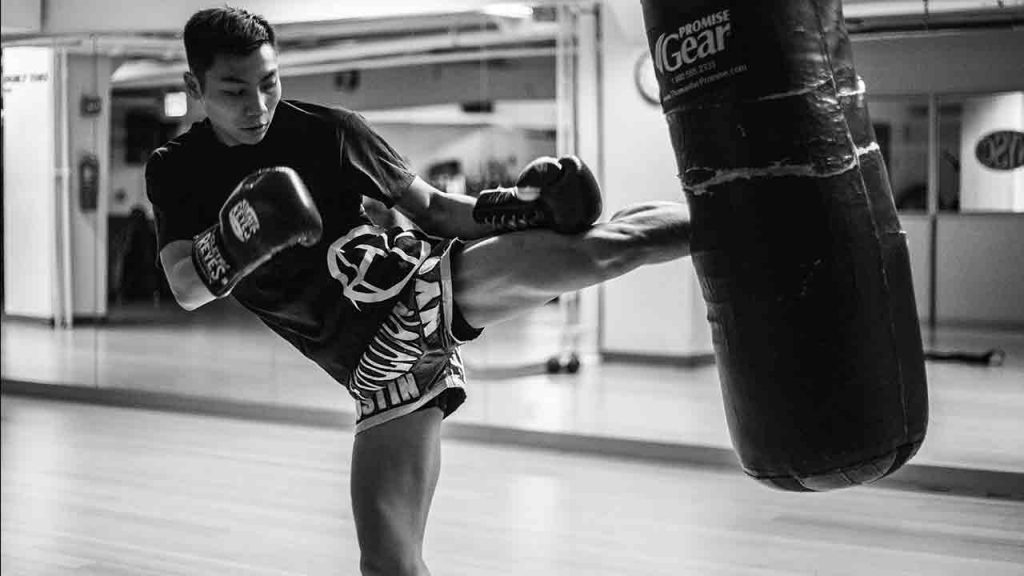 Muay Thai or Thai boxing is a traditional martial art form which originated in Thailand. It focuses on using your entire body as an offensive and defensive weapon. Traditional Muay Thai adopted unique fighting stances which emphasized upon a strong foundation.

A proper guard position is fundamental towards perfecting defensive techniques and to efficiently carry out combat maneuvers. It requires one’s body to move as a singular unit, with specific positions for one’s arms and legs. Mastering these are required for efficient footwork, solid body defense and performing powerful attacks.

The knowledge of how to properly implement and execute various positions and guards in combat situations must be inherent to Muay Thai instructors. The combination of the positioning of a fighter’s arms and feet are quintessential in obtaining a balanced posture primed for defense as well as attack.

Traditional Muay Thai stances encourage stability and structure in one’s positioning to carry out powerful attacks while spending minimal energy. A perfect Muay Thai stance would allow for high precision and quickness of movement, negate any waste of energy, and most importantly, provide a solid defensive structure.

The last of these positions is nicknamed the “triangle stance”, as it is defined by the position of the fighter on the vertices of an imaginary triangle on the ground. As one moves up the support positions, the fighter’s ability to react and anticipate the opponent’s movements is increased.

An optimal feet position according to traditional Muay Thai should be at a shoulder-width distance, with the rear foot slightly off the ground, priming the fighter to pounce for an attack, or dodge the opponent’s attacks quickly, while maintaining a stable position. Balance is key in Muay Thai, and feet position not only helps the fighter to effectively dodge attacks, but to also counter swiftly and effectively from an advantageous position.

Muay Thai fighting stances exhibit a geometric quality in that it structures the fighter’s body around triangles. This is done to maximize efficiency and to guarantee fluid and singular body movements. Stances are designed in a way to use every part of one’s limbs as a weapon. The hand position of the fighter helps in achieving such form.

A correct fighting stance should never expose the fighter’s throat, arms should be used to defend the fighter’s torso and the front of their body. As a general rule in martial arts, the lower the distance between the fighter and his opponent, the higher is the quotient of optimal stability. Mobility and flexibility should be mastered in long range combat situations, while stability should be prioritized where the opponent is up close and personal.

A stable and low center of gravity is an important attribute in order to execute Muay Thai techniques. A fighter should keep their legs apart and knees slightly bent. The chest should be directly above the knees and the upper body slightly crouched to protect the throat, as well as to master the center of gravity.

Let me take you through the traditional fighting stances in Muay Thai, as elaborated below:

The “Muay Chaiya” stance embodies a compact and defensive structure to maximize efficiency and protection. This is achieved by positioning one’s body in such a way that it is divided into two parts, upper and lower and six quadrants (upper left, upper right, middle left, middle right, lower left, lower right). This gives the fighter’s body geometric precision in performing various combat maneuvers while also maintaining a solid defense.

The position is such that it ensures the fighter’s attacks take the shortest route to the target, while also negating attack opportunities for the opponent. Accuracy and quickness of movement is a defining characteristics of this fighting stance. This enables the fighter to have more time in defense and an upper hand in terms of landing powerful attacks.

The “Muay Korat” stance is a more offensive stance compared to Muay Chaiya. The structure employed in this stance is optimized to boost attack efficiency. A successful iteration of this fighting stance is one characterized by aggressive offensive movements. The use of potent strikes with arms and legs is also an important feature of this stance.

The feet position in this stance is one oriented to take up a dominant attack position. The weight of the body has to be put on the front leg while the rear leg provides support. The gap between the knees should be minimal and they should be bent to allow for compact, quick, and aggressive footwork. The position of hands in this stance is such that it allows for quick and ferocious counterattacks.

The position of fists should be parallel to the fighter’s chest, with one arm outstretched. This allows the fighter to cover a lot of area in front of him while also disallowing the opponent any openings to attack. This form of aggressive defense allows opportunities for the fighter to launch quick and devastating counterattacks.

The “Muay Lopburi” stance employs a rather unusual hand position characterized by turned fists, upward-facing palms and arms bent at elbows. The hand position is low compared to the previous two stances. This fighting stance draws clear inspiration from the western bare-knuckle boxers’ guard. The objective of this stance is to facilitate lightning-quick punches and is optimal to execute the upward swing punch; a signature move of the Lopburi boxers.

The positioning of the feet defined in this stance is such to allow for versatility in attack and defense. Quick footwork is a desired quality, hence the distance between the legs shouldn’t be too much. This also allows for improved center of gravity and balance. This stance employs a flat rear foot while the fighter is in defense, while a raised rear foot in movement and attack, encapsulating the versatile nature of this Muay Thai stance.

The “Muay Pranakorn” stance is a fusion of certain elements of the aforementioned stances. The defining characteristic of this stance and also the most apparent, is the relatively large distance between the fighter’s legs. The rear foot is held at a ninety-degree angle to the front foot, with the front foot facing directly forward.

The knees are also bent significantly in this stance allowing for a low center of gravity and balance. This position also allows the fighter to have a diminutive figure, unsettling the opponent and creating an advantage.  Defensive solidity is afforded to the torso region of the fighter with the rear arm bent at the elbow. This stance places the fighter in a formidable position to launch and execute limb strikes, mainly from the rear limbs.

The “Muay Chaisawat” stance relies on the agility of the fighter to dodge attacks and attack almost simultaneously to gain an advantage over the opponent. The stance trains the fighter to effectively dodge, side-step and parry the attacks of the opponent whilst also executing powerful limb strikes in one singular motion. This stance, like any other traditional Muay Thai stance, prioritizes maximum efficiency and precision in defense and attack.

This stance is structured such that the fighter dances with his opponent, waiting for the correct opportunities to land blows. In this stance, strength is not the only desirable attribute, the quickness in movement, anticipation, and fluid bodily movement is also required to use this combat stance effectively.

Muay Thai was conceptualized a few centuries ago, hence its techniques have been developed over the years after continuous engagement with other martial art forms and cultures. Muay Thai has now gained international recognition, hence, its modern iteration draws a lot from western fighting techniques.

These influences are observed in the changes to the traditional fighting posture or fighting stance adopted by traditional Muay Thai which was practiced hundreds of years ago. Having said that, aforesaid are some of the fighting stances in Muay Thai that a practitioner must be aware of. If you found this blog helpful, don’t forget to check out our other informative articles as well!