Does Muay Thai Have Belts or a Ranking System? 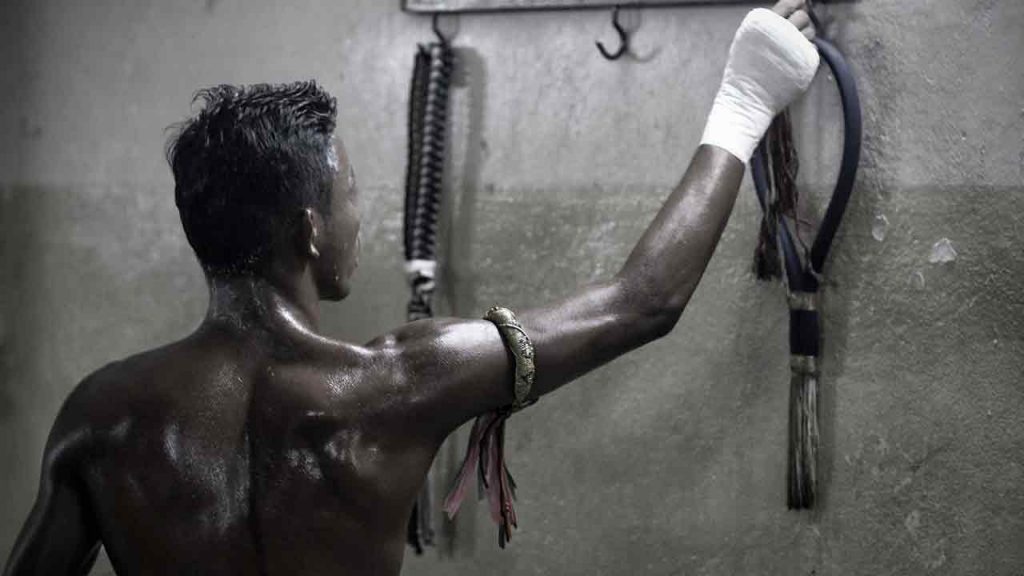 Most of us are familiar with the belt system used in Karate and other popular martial arts. The student begins at white belt and travels through a colorful ranking system until finally attaining the coveted black belt.

But, do all martial arts use belts? For example, have you ever seen a Muay Thai fighter wearing a belt? These fighters usually appear with just a simple pair of shorts, maybe some Muay Thai ropes wrapped around their hands, and a headband or armband.

Does Muay Thai have belts or some sort of ranking system? Let’s take a look.

Does Muay Thai Have Belts?

Traditionally, Muay Thai doesn’t have a belt system — or any type of ranking system. As you don’t see boxers with different belts or ranks, you won’t see Muay Thai fighters with them either.

The original sport in Thailand was a professional combat sport. Muay Thai fighters trained to enter the ring and win championship belts. They weren’t interested in advancing ranks or slowly expanding their skills as a hobby. Their goal was to dedicate themselves to training and become the best.

In the old Muay Thai gyms, and modern-day traditional gyms, anyone can spar with anyone. Fighters aren’t necessarily matched by skill level as they typically do in Karate schools by pairing students with the same belt color.

However, that doesn’t mean that it’s just chaos and nobody knows what’s going on in the gym. Fighters are judged based on their skills, their fight record, and the quality of their wins.

Have you ever trained any type of martial arts regularly with the same people? You get a feel for how each individual fights as well as their skill level. It’s the same idea in Muay Thai gyms, you just don’t have a visual marker on each student.

However, as Muay Thai expanded into the Western world in the 1970s changes started taking place. Now, many people who study Muay Thai will never step into a professional fighting ring. They enjoy the sport as a hobby, perhaps looking for a way to stay fit as well as learn some self-defense skills.

Some schools outside of Thailand now use a Muay Thai ranking system to mark a student’s progress through the sport. However, they don’t wear belts like other martial arts.

Back in the day in Muay Thai, instructors simply decided when their students were ready to enter the ring. They would often give the student an armband, called a Prajiad or Praciat, which was worn for luck. Some fighters also wore headbands, which is still common to see today.

Borrowing from this tradition, schools will often use different colored armbands or headbands to denote rank. Some schools use colored shorts or shirts as part of their ranking system as well.

As you might imagine, not everyone is on board with these practices.

Some people see it as a great way to motivate students and help them see their progress. It gives the hobbyist who is not interested in a championship title something to work toward.

It’s also a good way to quickly match people according to skill level. Again, hobbyists are not interested in destroying one another, they’re just looking to get a good workout, build their skills, and have fun. It’s not as easy to do those things when you put two very unequal fighters together in the ring.

On the flip side, critics complain that a Muay Thai ranking system is just a way to make more money. Schools charge students for the armbands, shirts, or shorts, as well as testing fees to earn the new level.

There is already a common complaint that some martial arts schools have turned into belt factories, or McDojos as they are sometimes called. Every few months they hold a test, charge the students, and hand out new belts — oftentimes regardless of whether the student’s skill level has really advanced.

This happens sometimes in Karate and Taekwondo, two of the more popular arts in the Western world. Of course, this doesn’t happen everywhere, there are plenty of traditional martial arts schools out there that turn out amazing martial artists. But it is something to be aware of when choosing a school.

Other arts like Brazilian Jiu-Jitsu combat this devaluing of their belts by requiring at least 10 years of training to earn a black belt.

However, this system is also imperfect. Some people have more natural skill, motivation, time to train, etc., and will naturally advance faster than those who don’t. Thus, it’s hard to say you have to train for a certain amount of time to earn a rank.

Karate, Taekwondo, and the like divide their curriculum up into blocks of techniques and kata. This is the basic framework that most schools use to test their students and determine rank.

However, because of its origins as a combat sport, Muay Thai doesn’t have these neat little divisions. Kata don’t even exist in Muay Thai. Fighters use shadow boxing to improve their skills. This is similar to Kata in that you practice the techniques alone and put great concentration into them, but it is not a prearranged set of moves like Kata.

Plus, there is no universal framework to go by. Though many Western schools are implementing Muay Thai ranking systems, each is their own. These systems are not standardized across Muay Thai schools so they only provide an accurate picture of skill level within that particular school.

“To advance, promote, educate, and instruct the martial arts of Thailand throughout the world while offering the student, fighter, and instructor the highest standard of teaching Thai Boxing (Muay Thai).”

In lieu of belts, they use armbands as a nod to the Prajiets or Prajiouds used in traditional Thai Boxing.

The colors run similar to other martial arts. There are three beginner bands — white, yellow, and orange. As students progress, they advance through green, blue, purple, red, brown, and finally, black.

Learn a little more about the armbands and their use here:

How Long Does it Take to Get a Black Belt in Muay Thai?

We can’t tell you how long it would take to get a black belt in Muay Thai because they don’t exist. The closest you can get is a black armband according to the WTBA’s ranking system.

But for the sake of argument, let’s consider a few scenarios.

Let’s assume you start dedicated training in Muay Thai. With six months of hardcore training and a bit of luck, you might be ready to use your skills in a fight.

Does that make you a black belt in Muay Thai? Hardly.

To become proficient enough to teach Muay Thai, most people require about 5 to 7 years of training.

What if we compare Muay Thai to another martial art? Muay Thai makes more use of the limbs (including elbows and knees) but because of the clinching and grappling, it is more similar to Brazilian Jiu-Jitsu than something like Karate.

Considering it takes about 10 years to earn a black belt in BJJ, we can assume something similar for Muay Thai.

We hope you have enjoyed this look into the world of Muay Thai. The training you’ll receive at a Muay Thai gym is quite different than what you’ll get in a Karate class. To learn more about the differences, check out this article!