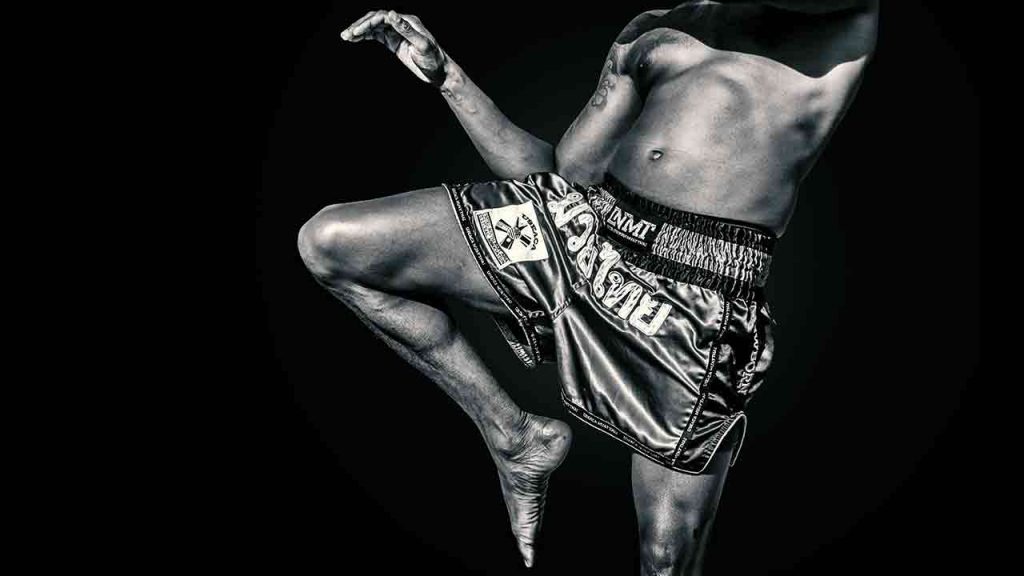 Take that! And that! …and that!

Muay Thai fighters, or Thai boxers, are not known for showing mercy. And they are not afraid to make good use of every available weapon in the fights.

This is why Muay Thai is sometimes known as the “Art of Eight Limbs” because it adds the pairs of elbows and knees to the more typical pairs of hands and feet.

Attacks are vicious and effective. Today we’re going to explore the basic devastating Muay Thai kicks that fighters learn and use…check it out!

You can think of the push kick as the foot equivalent of the jab. It is fast, powerful, and extremely effective. Some fighters mostly use it defensively to keep their opponent at bay or to measure their distance, but it can be a powerful attack as well.

For speed, this Muay Thai kick is often done with the front leg. To perform it, shift your weight back to lighten the front foot and pull up the knee.

Release the leg strongly as if you were stomping on a bug, thrusting the hips forward for added power. However, instead of driving your foot into the ground, you drive it into your opponent’s solar plexus, hips, abs, or even face.

You can send your leg out sideways to perform the teep, or you can send it out to the front (called a teep trong). The important thing to remember is to chamber the knee to get the extension that will drive your opponent back.

You can also add a jump to the push kick, called the kradot teep. The jump adds power to the kick as well as allows you to strike a higher target.

Here’s a quick explanation of the basic push kick in Muay Thai.

Roundhouse kicks are devastating and frequently seen in Muay Thai fights. The kick draws its power from the rotation of the hips as the fighter swings the leg (almost like a dead weight) and slams it into their opponent.

To perform this Muay Thai kick, rotate on the front foot, and use the hips to swing the back leg around. Targets are plentiful and the kick can be thrown to the head, body, or legs.

This kick is present in other types of martial arts, but Muay Thai adds a sharp twist. Instead of kicking with the foot, which has smaller bones, fighters strike with the hard bone of the shin. They also train extensively by striking their own shins repeatedly to toughen them.

To surprise an opponent, fighters will sometimes switch their feet before performing the kick. This must be done swiftly and sneakily to catch the opponent off guard.

Are you wondering how powerful a Muay Thai kick can be and how tough the fighter’s shins? Watch this Muay Thai fighter plow through a baseball bat to get an idea!

This variation of the roundhouse kick requires tremendous flexibility and speed to pull it off. Instead of throwing the kick laterally as you would a normal roundhouse, you begin high and bring the kick downward on your opponent.

Gravity adds extra force to the kick, making it stunningly powerful. You have to be careful, though. The kick is harder to throw and it takes longer to get into position, which means you are vulnerable to attack if your opponent is quick.

The diagonal kick is cited as one of the most commonly used kicks in Muay Thai. It is sneaky and quick, though perhaps not as devastating as some of the others we’ve mentioned. However, that doesn’t mean it won’t hurt…a lot…to receive a well-placed diagonal kick.

In reality, this kick is a variation of the roundhouse kick that is the opposite of the downward roundhouse. Instead of reaching up and kicking down, you kick upwards at a 45-degree angle.

The target is usually the lower rib cage and you want to strike with the shin. The speed of the kick makes it hard to deter, but you should keep an eye out for your opponent’s elbows.

This flashy kick is difficult to perform and you don’t see it often. However, it yields devastating results when it is used and executed correctly.

There are two methods of execution. The first is to jump straight up from your stance and execute the kick in the air. The second is to raise the knee first and scissor the legs in the air, kicking with the opposite leg.

Whichever method is used, the results are astounding when placed correctly and you will look like a serious bad-ass while doing it.

This kick is not overly favored by Muay Thai fighters because it involves turning your back on your opponent. However, the risk is well worth it when you land the technique correctly.

From a right fighting stance, pivot on your left foot to the right, bringing your right knee up as you pivot. Once you’re facing away from your opponent, shoot your right leg out behind you to hit the opponent in the face, chest, or solar plexus.

As a variation, you can “miss” your opponent’s head then sharply bend your knee. This snaps the momentum of the kick 90 degrees to strike your opponent in the side of the head. This kick is difficult to perform, but highly effective.

Check out this informative video for some great tips on perfecting your basic Muay Thai roundhouse kick.

If you’ve studied Karate, you’re already familiar with sidekicks. The basic premise of the Muay Thai sidekick is the same. The fighter shoots either the lead or back leg sideways at their opponent.

However, the power is generated differently. Karateka uses a chambered knee to generate power. Muay Thai fighters will take a small step with the opposite leg and generate the momentum needed to blast their opponent.

The technique is great for throwing in after a missed or feinted roundhouse kick to take your opponent off guard. Check out this explanation/demonstration here.

The axe kick is not traditionally a Muay Thai kick, but it has migrated over from other arts. Perform the kick by sweeping your leg straight up and bringing it down with bone-crushing force on your opponent’s head, face, or shoulder.

Few fighters rely on this kick extensively for a couple of reasons. First, it requires a lot of flexibility to perform effectively. Second, the position leaves the fighter vulnerable to leg sweeps or to some other sort of counter technique.

However, when this technique is done well, the probability of lights out for your opponent is quite high. Check out this breakdown of how the axe kick works here.

Blast Away Your Enemies — The Muay Thai Way

Muay Thai fighters have a tough reputation for a reason. These guys don’t hold back and you certainly don’t want to be on the wrong end of one of these Muay Thai kicks.

Muay Thai training takes a lot of determination and learning these kick techniques is no different. You have to train hard to get the form right as well as toughen your shins and body to handle the blows.

Interested in learning more about Muay Thai and how it compares to Karate? Check out our comparison here!