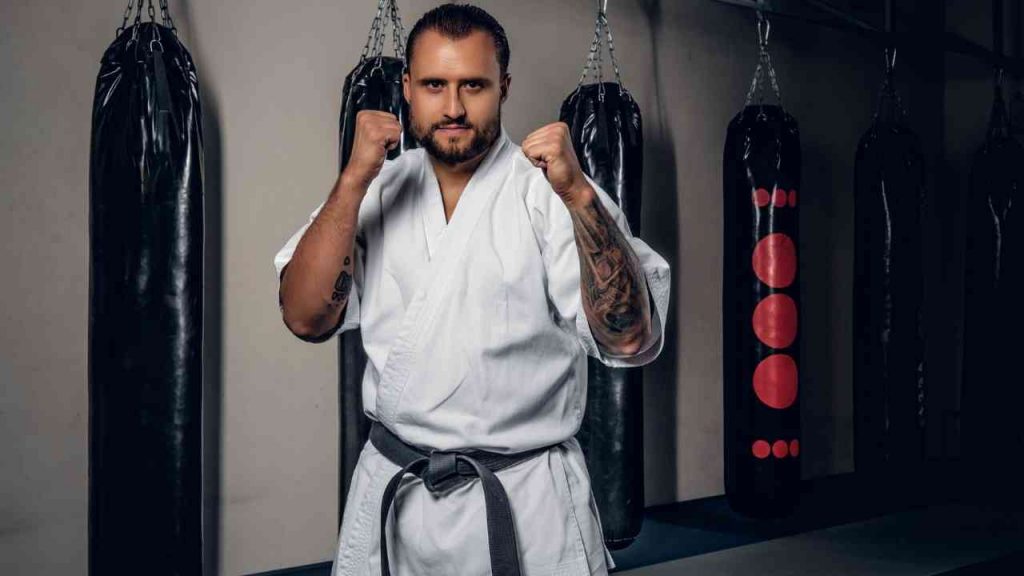 Training McDojo for years and getting no results is absolute wastage of time as well as money.

I mean, it would be an absolute nightmare to spend years learning something inauthentic or a hoax.

Being a traditional karate practitioner, I can tell you that the differences between a dojo and McDojo are pretty distinguishable. There is a world of difference between authentic martial arts and its prevalent ‘forged’ form.

So, let me tell you what’s a McDojo and the most common signs of a McDojo you must know.

What Is A Mcdojo?

The word ‘Mc-Dojo’ is the Portmanteau (blend) of two words: Mcdonald and Dojo. Dojo in Japanese means a place where martial arts are taught and practiced. And Mcdonald, as you all know, is a famous fast-food chain.

The prefix of ‘Mc’ is added to the name to de-mean the concept of Fast-Dojo. Like fast food, it  is prepared instantly and has a lot of sodium, fat, and sugar, which is detrimental to health. Similarly, McDojo is a hoax that needs to be eliminated.

The reason it is prevailing is that the new generation requires instant results and wants to learn, grow, and achieve faster than everyone else. Due to this, many fake martial trainers are taking advantage of it.

According to many martial arts practitioners, the McDojos system disparages the core concept and soul of real art. Further, they acknowledge that it’s solely made to make money instead of genuinely teaching martial arts.

They believe it’s just another way of making money and nothing else. Despite charging hefty fees, it delivers short training and teaches instant and impractical techniques that lack implication abilities.

How Does A McDojo Works?

A McDojo functions by teaching watered-down martial arts techniques. These techniques are structured to be easy and adaptable to anyone. In these dojos, the teachers are inexperienced, but the students are fooled to believe they are quickly learning martial arts.

The teachers in these dojos claim to be the ‘ultimate masters’ of martial arts, whereas they only teach ‘bullshido’. The term Bullshido McDojo is a demeaned form of bushido which means ‘ways of the warriors’. But since McDojos are focused more on making money and upgrading neophytes, they miss out on the real essence of martial arts.

10 Warning Signs Of A McDojo

Now that you know what a McDojo is, let me tell you how to spot a McDojo. The signs of a dojo being a McDojo are pretty evident. But if you’re a newbie, you can easily get fooled by the intriguing uniforms and the fascinating belting systems.

‘Love for money’ is the best identification of a fake Dojo.

Traditional and authentic martial arts sensei, whether they teach karate, taekwondo, Kung-Fu, or Judo, have one thing in common: the ultimate devotion and love for the craft. For a karateka, nothing comes before the art.

The McDojo’s charge a heavy amount of fees in the name of short course memberships, high costs uniforms, class upgrades, and equipment. The focus of these dojos is to run the business rather than to teach self-defense art.

2. Getting Black Belt Is Easier Than Ever

You might have seen young kids wearing black belts. That’s one of the most evident McDojo signs.

There are years of hard work, dedication, and consistency behind a black belt in original martial arts. It is considered one of the most honorable ranks in martial arts, which everyone cannot achieve. Getting a black belt requires a minimum of 3-5 years, and even then, it signifies that a karateka has mastered the skill to ‘some’ extent.

It deceives students by the belt ranking systems. These Dojos make claims to provide black-belt training in 1-2 years. But, in authentic fights, these fake black belt holders get beaten up by brown and blue belt holders of authentic dojos as they have been trained by sensei with original martial art lineage.

Martial Arts is not just a sport but a way of living. It is an art that makes a karateka harmonize its mind, body, and soul. And, Sensei (master of art) is the person who not only teaches this art to his students but also guides them towards a dignified way of living.

In martial arts terminology, Lineage shows the succession of knowledge from one master to another. Every respectable sensei in martial arts comes from a specific lineage or has a history of being taught by a master whose origin is verifiable.

If the Dojo provides unclear details about the teacher’s lineage or the sensei’s sensei, it’s an evident red sign that the dojo is McDojo.

If you see your Dojo shying away from Sparring, then it’s time to be alert!

Sparring is the form of training in which karateka goes against each other. The purpose behind sparring is the betterment of response time and providing the touch of a real fight.

Fake Dojos generally avoid sparring as they want to keep the learner in a comfortable and safe zone. And sparring, being combat, has its risks. Sparring can easily distinguish between bushido and bullshido.

A real karateka never shies away from combat. In fact, he is trained for years to fight.

It’s a known fact that McDojo’s are more inclined to increase students’ fitness and health rather than teaching them how to fight or defend. The techniques taught in McDojo’s are just to keep students active, but those techniques are not effective in real combat.

And that’s precisely why you’ll never find a McDojo encouraging competition between children as they fear losing in real martial arts competitions.

Doing Katas on music is another identification of McDojo.

There’s no tradition or history related to practicing with music in martial arts, but the modernized inauthentic schools tend to encourage music in classes.

In Japan and China, Martial arts are considered mind soothing and spiritual. The actual tradition is to practice martial arts in complete silence as it helps in developing focus.

However, the philosophical, psychological, and spiritual benefits of martial arts in McDojo’s are often overlooked. It was considered as the act that cleanses your mind and enriches your soul. But sadly, McDojo’s trends are snatching away the tradition of authentic martial arts.

You might have seen belts with several colors and varying signs. That’s something you can buy with minimal skills in a McDojo if you spend money.

The reason behind these multiple belt gradings with increasing bars and sashes is that these dojos compel you to believe that you’re constantly and rapidly growing.

The most deceiving part about these belts is that they can be achieved by paying more money in a short period without much due diligence. And of course, in these McDojos, the higher the belt rank, the more the money, as the higher belt training is more expensive.

Ever asked your Sensei about his fight-winning certificates, records, or evidence. If not, maybe it’s time to go and check.

The teachers in McDojo’s often brag about their 7-Dan black belt but have zero combat records. Every real master of martial arts has numerous documents and images of the fights he has won.

They are good at fighting and have hands-on experience conquering real competitions themselves. And that they have experiences to share with you too. If your teacher fails to do so, maybe he’s not an absolute master!

Another identification of a fake dojo is the teacher’s vision and focus. A real martial art sensei not only tells his students ‘what to do’ but ’why’ to do it. A sensei is keen on educating the student, so he can never miss out on the meaning behind each move, Kata and Kumite.

The teachers in McDojo’s are more focused on the numbers of punches, kicks, katas and Kumite, which is why there are more katas in McDojos than in a real one. In an authentic dojo, if your sensei tells you to practice 20 punches, he will tell you how practicing these punches will help you or develop your skill.

10. Everyone Gets Promoted Somehow

Everyone has their own pace at learning. Since fighting combat is an art, there’s no specific time limit to learn and earn a belt.

Sadly, that’s not the case with McDojos. In a McDojo, no matter what your pace is or how bad you are at your craft, as long as you are paying for your brand-new belt, you’ll get it. On the contrary, a real sensei will never rush you into the next level until you are ready for it.

So, if you’re constantly growing as a karateka, probably it’s time to stop and get your skill tested!

The Bad Effects Of Going To A McDojo

McDojos are not only pricey and deceiving but can have adverse effects on one’s mind and body. The main reasons are listed below:

1. Elimination Of Self Development And Mental Teachings

Martial arts or the art of war is not just about fighting. It is more about teaching the karateka to be calm, composed, and confident in a fight.

In McDojos, rapidly increasing belt rankings can create negative masochism in practitioners because it eliminates the link of martial arts with psychology and philosophy, which is essential.

McDojos misses out on practices like controlled breathing and meditation in martial arts that help students develop their mental peace and strength.

In real martial artists, habits like consuming a controlled healthy diet, being disciplined, and devotion to art enhance the karateka’s personality. Original karatekas are more self-aware, confident, and skilled in their craft, whereas Mcdojo practitioners often get knocked out in real situations.

After all, martial arts is all about being able to use your mind in battling combats. But, mental teaching is often found missing in most McDojos curriculum.

It is a fact that martial arts is the art of ‘self-defense’. But, the McDojos that charge a high fee and provide multiple belts against it have failed to teach the way to defend yourself.

This can be lethal as a student who takes pride in being a ‘black belt’ can get injured in a real fight as he is not trained enough to tackle every opponent.

Martial arts training is supposed to save one’s life, but a fake Dojo can make you end up dead in a critical combat situation.

Martial arts are prevailing all over the world. People of every region are eager to know more about it. But the growing number of fake martial art schools is somewhat disheartening. This is why it is essential to identify between real and fake martial arts.

Traditional martial arts may not be as easy and adaptable. Still, it develops karateka’s character and helps to defend oneself. It also incorporates a disciplined way of living which is essential for students.