What is Kenpo Karate? – The Ultimate Introduction 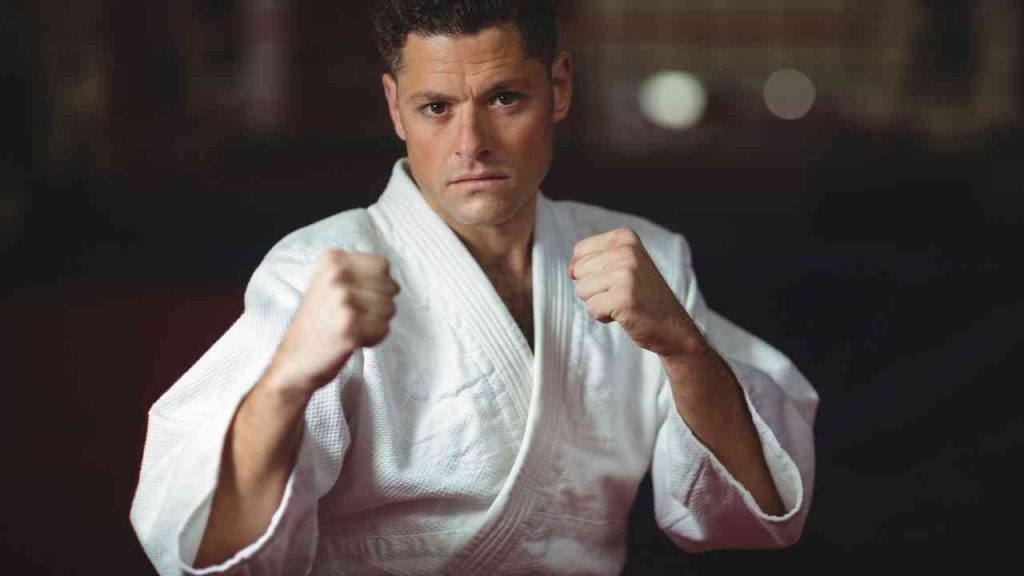 Kenpo is one of the several martial art forms which developed in Asia. It has roots both in Chinese and Japanese martial arts and is commonly associated with modern-day Karate. The most common form of Kenpo is American Kenpo and is widely taught in the US.

Other original forms are still taught in other countries, but they are slightly distinct and less aggressive. Asian Kenpo masters do not consider American Kenpo to be a real style of martial art as it was made by Ed Parker combining numerous different techniques of martial arts thus losing its originality.

In 1916, a young five-year-old boy, James Mitose was sent to Kyushu, Japan from Hawaii to learn his ancestor’s self-defense art form called Koshu-Ryu Kenpo. Kosho-Ryu Kenpo was introduced by two families in the 17th century called Kumamoto and Nagasaki.

They brought the knowledge of Kenpo from China to Kyushu in Japan. After finishing his training in Japan, Mitose returned to Hawaii and opened a self-defense club in Honolulu called ‘Official Self-Defense’. It was from there the 5 major influencers of Kenpo emerged, namely,

William K.S. Chow is responsible for Americanizing the art form. He opened his own school in 1949 where Edmund K. Parker became his student at the age of 16. Parker combined this method with other martial art techniques and opened the first commercial Karate studio in 1954.

Is it Kenpo or Kempo?

The word ‘kenpo’ is a Japanese translation of the Chinese word ‘quanfa’ which is informally translated as ‘kempo’. Due to the widespread and cross-cultural adoption of this art form, many divergent word meanings and definitions of it have emerged.

The word ‘kenpo’ also translates to ‘ken’ meaning fist and ‘po’ meaning a method or law. Hence, a widely accepted interpretation of the word Kenpo is the ‘fist method’ or ‘fist law’.

Difference Between Kenpo and Karate

The origin of Kenpo and Karate are quite similar as they both developed because of the exchange between Chinese and Japanese martial arts. Both the art forms use a combination of hard and soft techniques and have similar attack and defense techniques.

However, there are some major differences also. Kata is a very important aspect of Karate whereas Kenpo does not use kata’s and instead has its own forms.

The use of symbols is another key difference between Kenpo and Karate. The Dragon is a very important symbol in Kenpo form whereas Karate hardly uses any symbols. Both the styles follow the same belt ranking system.

There are five major styles of Kenpo in use today which share a lot of similarities with each other.

Kenpo Karate belt ranking system might vary according to the Kenpo karate style. However, the belts are broadly classified into the following categories.

Mentioned below is a list of some common Kenpo techniques.

What is American Kenpo?

As mentioned above, American Kenpo is the most popular form of Kenpo. It was developed by Ed Parker, a student of William Chow in Hawaii.

He uses techniques from various other martial art forms, a reason why Kenpo masters believe his style is not real and only has flashy moves. He is, however, rightly credited for making Kenpo popular in the US and even in the movie industry.

Some techniques of American Kenpo includes:

With a unique blend of rapid hand strikes utilizing kicks, blocks, etc, American Kenpo, unfortunately, split into various art forms and divisions after the death of the founder, Ed Parker.

What is Chinese Kenpo?

Some techniques of Chinese Kenpo include:

What is Japanese Kenpo?

Japanese Kenpo usually implies Shorinji Kempo. It is a traditional system that follows Buddhist beliefs and looks very similar to Japanese Jujutsu. The philosophical and religious aspects are often highlighted in this Japanese style.

Modern Kenpo is either Shorinji Kenpo or Nippon Kenpo. Shorinji Kenpo combines strikes, locks, and throws and is inspired by karate, jujitsu, and perhaps the founder’s experiences in China. Its primary training method is paired kata. Nippon Kenpo is also an art that combines a similar mix of techniques but makes it into a full contact sport.

Traditionally, kenpo referred to boxing methods that came from China. You might see this term used in classical jujitsu literature to refer to this.

What is the difference between American Kenpo, Chinese Kenpo, and Japanese Kenpo?

The American, Chinese and Japanese Kenpo have intricate differences in their styles and characteristics. The Japanese Kenpo follows Buddhist beliefs and the fighters wear unique uniforms supplemented with a vest. In style, this form of martial art leans more towards jiu jitsu.

Chinese Kenpo traditionally leans more towards Kung fu with short, rigid, and deep stances. Fighters generally wear Chinese costumes. On the other hand, American Kenpo fighters wear Japanese uniforms which are inherently black but come with a lot of patches. This martial art has higher stances with a mix of open hand strikes and numerous graceful forms.

That being said, all these three types of Kenpo art forms come from multiple lineages and historical narratives, but they more and less follow the same kind of techniques.

American Kenpo moves might sound different due to the English names given to them by Ed Parker, but they all follow the same offensive and defensive techniques.

Weapons in Kenpo Karate are used for self-defense. The self-defense techniques can be adapted to single stick or double stick. Some weapons used are,

Is Kenpo effective in a street fight?

Kenpo can be highly effective in a street fight. However, it is important to note that Kenpo Karate has many styles and not all styles are effective in street fights. Koshu-Ryu Kenpo and Kojukenbo are great for physical and mental strength in a fight.

With diligent training and proper execution, almost all martial arts forms can give you an upper hand during fights.

To Wrap it Up

In the sections above, I discussed everything about the intricacies of Kenpo karate while touching upon its history, founder, techniques, and so on. This blog can be helpful for anyone who’s seeking knowledge before taking up this highly rigorous form of martial art.

In the end, it all comes down to the fighter and the most important – three D’s – determination, dedication, and devotion – that can make you successful in all your conquests.

Curious about more Karate styles, you can check out article: 13 Main Karate Styles and Their Differences.