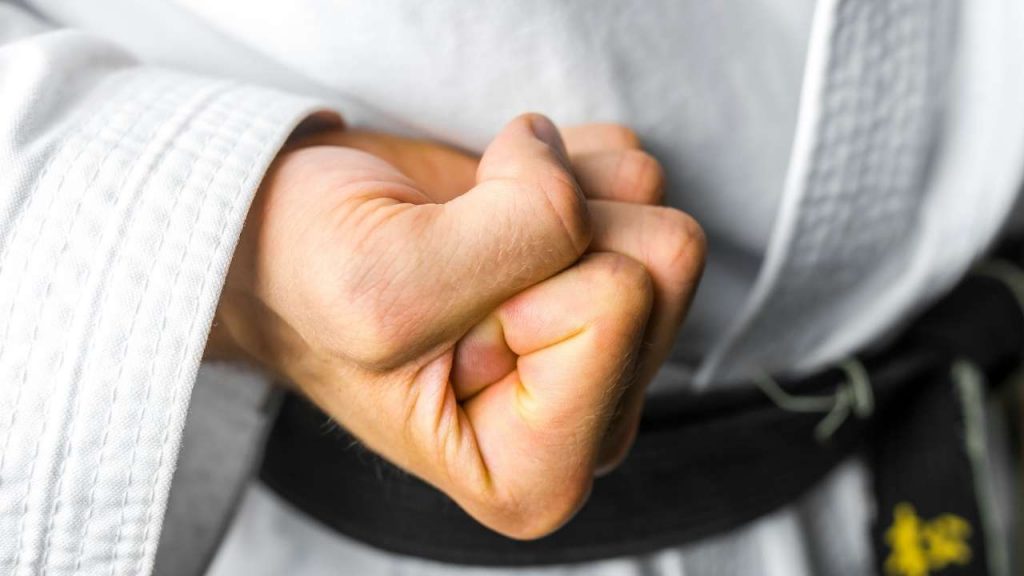 The guiding principles (called the Twenty Guiding Principles of Karate, also known as the karate quotes of Gichin Funakoshi) is an extensive book.

It has served quite legitimately as the textbook of karate for about a century. It talks about the niju kun (20 principles) and has 20 chapters, all of which progressively define what the art of karate is.

We are discussing this book in-depth in this article.

The Twenty Guiding Principles Of Karate

The main inspiration of this article is taken from sites like the Japan Karate Association.

1. Do Not Forget That Karate Begins And Ends With Rei

Rei is the bow that karateka takes before and after the match, it represents the willingness to learn new things of life and humanity. This sole principle is, to me, the foundation of all karate principles. If you cannot respect your opponent, you will end up taking the fight personally.

2. There Is No First Strike In Karate

What this means is that karate isn’t supposed to be started aggressively. Though that won’t be the case when we know that we’ll be attacked anyway. This kind of logic is found in kung fu too. Beginners especially need to know this rule, as well as the basic moves.

3. Karate Stands On The Side Of Justice

This is an important rule in the 20 precepts of karate that has been the basis for centuries. We always use karate to help society and the oppressed. We’ve to stand up for those who are being ill-treated, both physically and verbally!

4. First Know Yourself And Then Know Others

Understanding karate is very important for us, but so is understanding yourself and your mind. If you’ve not done the latter two, you’ll be unable to grasp the art.

The mind must be unleashed way before the fists and weapons. Whether you use your conversation skills to stop a fight, or limbs and weapons. The mind should be in control of it all.

6. The Heart Must Be Set Free

Liberate your heart from linear thoughts. It should be open to any and all possibilities. We cannot be controlled by emotions; indeed, we must be the ones who control them. Martial arts principles like these were pioneered by Gichin Funakoshi in The Twenty Guiding Principles of Karate.

Whether it is carelessness in the art, in the life of the karateka. It should be done away with. Otherwise, it will cause harm and violence to us.

8. Karate Goes Beyond The Dojo

Keeping yourself in shape, both mentally and physically, is a core aspect of karate. These values aren’t limited to just the dojo, but also are to be implemented outside of it.

9. Karate Is A Life-long Pursuit

Karate is an art, and as is the case with all types of art, needs to be upgraded continuously. We do not just simply practice it in the dojo, no, we take it deep in our hearts.

10. Apply The Way Of Karate To All Things. Therein Lies Its Beauty

11. Karate Is Like Boiling Water, Without Heat It Returns To Its Tepid State

There is no such thing as a “break” in the world of karate. If the karateka takes breaks of one, or maybe two weeks, he/she will notice a slump in his/her performance. The art isn’t just limited to the Dojo Kun, but to all of the karateka’s life.

12. Do Not Think About Winning; Think Rather Of Not Losing

The only goal is to not lose the fights that happen. If you keep thinking of winning, you will become more and more predictable. Your opponents will eventually discover some, or worse, all of your weaknesses. You mustn’t lose, no matter the cost.

13. Make Adjustments According To Your Opponent

Just like how our daily dealings with our spouses cannot be like those compared to our children. Similarly, we also cannot use the tactics and moves we used on a slow opponent against one who is fast and agile.

14. The Outcome Of A Battle Depends On How One Handles Emptiness And Fullness

When your opponent is trying to evade your attacks, try to hit him harder. Similarly, if he is attacking you at a fast pace, dodge and evade him quickly. Don’t go toe-to-toe with what he/she is doing. Instead, improvise and overcome.

15. Think Of Hands And Feet As Swords

This is one of the most combat-defining principles enumerated in The Twenty Guiding Principles of Karate. Your hands and feet should be fast and agile. Just like how we can hack and cut flesh with a sword, so should you try to achieve every time with all of your limbs.

16. When You Step Beyond Your Own Gate, You Face A Million Enemies

You must be prepared for any kind of eventuality that comes across your way, whenever you go out. At home, we aren’t exposed to any kind of foreign threats. But you should be aware of the dangers that lie ahead when you step outside of your residence.

17. Formal Stances Are For Beginners; Later One Stands Naturally

Posture is taught to beginners so they may learn how to balance their weight when attacking and defending. But when beginners learn the basics of footwork, then they can stand/run/fight or defend however they want to.

Kata can be called as an idealized way of fighting. You don’t just have to harness the physical aspect of it, but also the mental one. Kata though is way easier, way more predictable, and much nastier than actual combat.

19. Do Not Forget The Employment Of Withdrawal Of Power, The Extension Or Contraction Of The Body, The Swift Or Leisurely Application Of Technique

It is not a prerequisite for Shotokan karate to always be aggressive. Sometimes you will faint a defense, to only later change that to some attack. Similarly, not every defense will be swift either.

20. Be Constantly Mindful, Diligent, And Resourceful, In Your Pursuit Of The Way

You must always improve upon the tactics and strategies that you have learned. Karate isn’t a static art. It changes with time, while retaining its core essence.

Details Of The Book

The Twenty Guiding Principles Of Karate, a detailed Shotokan Karate Book is quite popular amongst those who love martial arts. This amazing and detailed book is a must-have for every Martial Arts student as it comprises the key principles that guide Shotokan Karate and can be valuable in the Shotokan belt tests.

The book of “Shotokan karate” is written by master Gichin Funakoshi. The book was first published in 1938, and ever since has been translated into numerous languages. The book is one of the biggest reasons how karate went from being just a Japanese martial art, to a global one.

Reviews Of The Book

The book itself is only 128 pages. However, we shouldn’t be fooled by its size. It is full to the brim with the knowledge that is very deep in meaning. It teaches the karateka to not learn something that is beneficial to him/her, but beneficial to all of humanity

A karate quote of Gichin Funakoshi seems very fitting to conclude this article, about his art:

“The ultimate aim of karate lies not in defeat, but in the perfection of character of its participants” – Gichin Funakoshi

The book of Shotokan karate describes in detail what master Funakoshi wanted his disciples to know, even after his death. The niju kun (20 precepts of karate) is a must-have for those who are not just willing to expand their libraries, but also to learn the art itself.