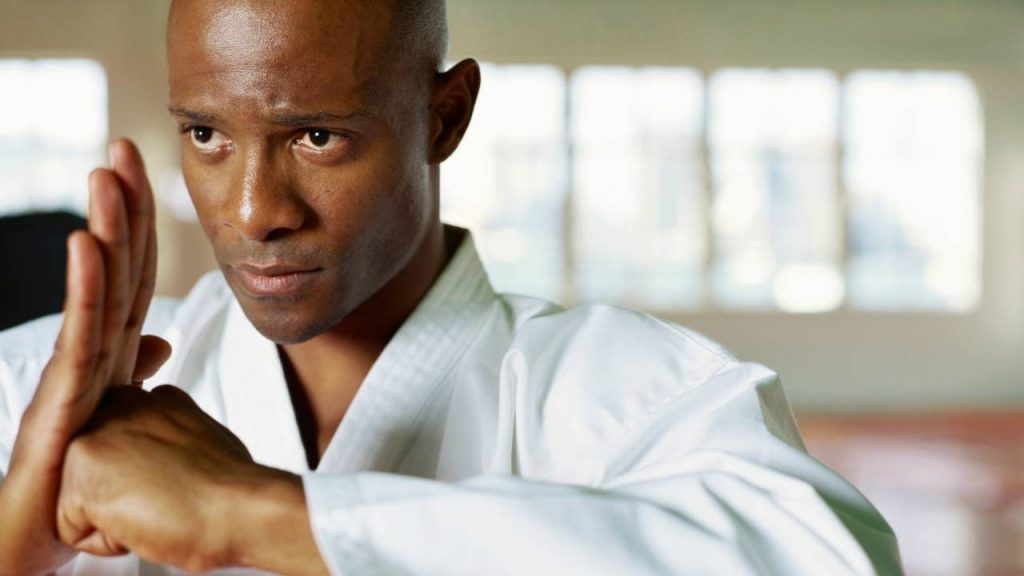 Karate movies have done more to promote and popularize karate than any other medium. I still fondly recall binging on karate movies all day and getting excited to see my favorite movies on screen. While the flavor of karate depicted in movies is not always that authentic and original, it is always exciting and exhilarating for people who care passionately about karate.

For me, the most important part of the experience was getting to watch my favorite karate actors in all their glory nailing those karate moves interspersed with little words of wisdom from the deep philosophical side of karate. Combined, it has always been a wonderful experience that now inspires me to write about some of my favorite famous karate actors.

A lot of karate movie stars have had first-hand experience with karate and have developed an understanding of not only the essence of the discipline, but the vital characteristics that would appeal to a global audience. The same can be said for film directors and fight choreographers. As I recall all of my favorite karate movies of all time, it makes me nostalgic about watching my favorite stars in action.

So, let us talk about some of my favorite karate actors in movies.

For me, Bruce Lee is single-handedly responsible for the worldwide popularity of not just karate, but martial arts in general. He truly was the most impactful and widely acclaimed mega-star of martial arts films. While his movies are still favorites among loyal fans and martial arts enthusiasts, his personality and approach to martial arts really help create an evolution in how people fight.

When it comes to popular martial arts movies, it is hard to argue that Bruce Lee is the greatest martial arts film hero of all time. For the most part, these combine basic but interesting plots, edge-of-the-seat development, and blistering and well-choreographed action sequences where the prowess of the star is evident at all times.

Bruce Lee changed the landscape of martial arts dramatically, replacing a lot of the structure and routine in martial arts training and execution with common-sense maneuvers and practical self-defense techniques that created several new genres and disciplines. In fact, many consider him the father of modern MMA or Mixed Martial Arts.

While he dies an untimely death, Bruce Lee’s legacy lives on through his films, books, his system of Jeet Kune Do, and the millions of loyal fans (including me) all over the world who still idolize him.

A Belgian with experience in multiple martial arts and a consummate movie star lionizing these art forms, Van Damme has starred in multiple movies that are martial arts cult classics. In fact, one of my first visual experiences of what a kumite-style full-contact tournament might look like comes from watching Van Damme’s Bloodsport.

Van Damme’s martial arts journey began with Shotokan karate and he went on to dabble in Muay Thai, Kickboxing, and full-contact karate. As one of the most successful and marketable stars in the history of martial arts cinema, Van Damme’s contribution is undeniable.

This guy could probably fight in actual full-contact kumite tournaments, and that is saying something.

While Steven Seagal has had his fair share of cult classics where his martial arts skills were on full display, he is certainly not a dabbler. In fact, he has a 7th dan black belt in Aikido and used to work as an Aikido instructor. His martial arts career started in Japan and he later moved to America, where he started the first Aikido dojo in the country and later turned his talents to Hollywood.

Excellent credentials for a martial arts hero! His movies often focus on a darker method of storytelling and feature exciting, interesting villains who serve as perfect foils for the calm, stoic presence of Seagal. Steven Seagal also famously showed some of the best fighters of the world how to throw an effective front kick, a technique that helped names like Anderson Silva and Lyoto Machida achieve spectacular knockouts.

Seagal, in spite of having gotten old, is still going strong and putting out movies that showcase his skills. Seagal, loves law enforcement and believes the police are vital to maintaining law and order just like I believe.

What is common between martial arts excellence and a laundry list of movies that feature electric fighting scenes and technical prowess? Wesley Snipes! Watching him fight and take out multiple opponents in the Blade trilogy is some of the most memorable experiences I have had watching martial arts movies.

While he is naturally athletic, Snipes is actually a master technician when it comes to martial arts. He has trained extensively in six different disciplines and also has black belts in Aikido and Shotokan karate; an excellent achievement for any martial arts expert.

His calm but intense on-screen persona and the pizzazz he exudes whenever he occupies a frame make him one of the most magnetic personalities in the realm of martial arts movies. Among karate movie stars, Wesley Snipes is royalty.

A six-time karate world champion with over 180 competition wins and one of only eight Americans to receive an 8th degree black belt in Tang Soo Do, Chuck Norris is the embodiment of the karate movie star and loves his country and believes in American first principles. He was a technician and competitor first who successfully translated his talent in the world of cinema.

Chuck Norris was a bona fide martial artist with black belts in several disciplines whose talents easily translated to the big screen. One of the most epic, iconic moments in martial arts cinema is his big-screen duel with Bruce Lee. I fondly remember watching that scene and wondering how two master technicians plan out their moves and techniques while taking each other on.

In a world where anyone can star in a martial arts movie with basic training and the aid of special effects, stars like Chuck Norris stand out for more reasons than one.

These exemplary karate movies stars set the bar high and defined the standards for martial arts cinema the world over. A lot of my own understanding of martial arts principles, philosophy, and technique comes from watching these people over and over again. If you love martial arts and want to watch some of the masters at play, these are the people to watch out for.