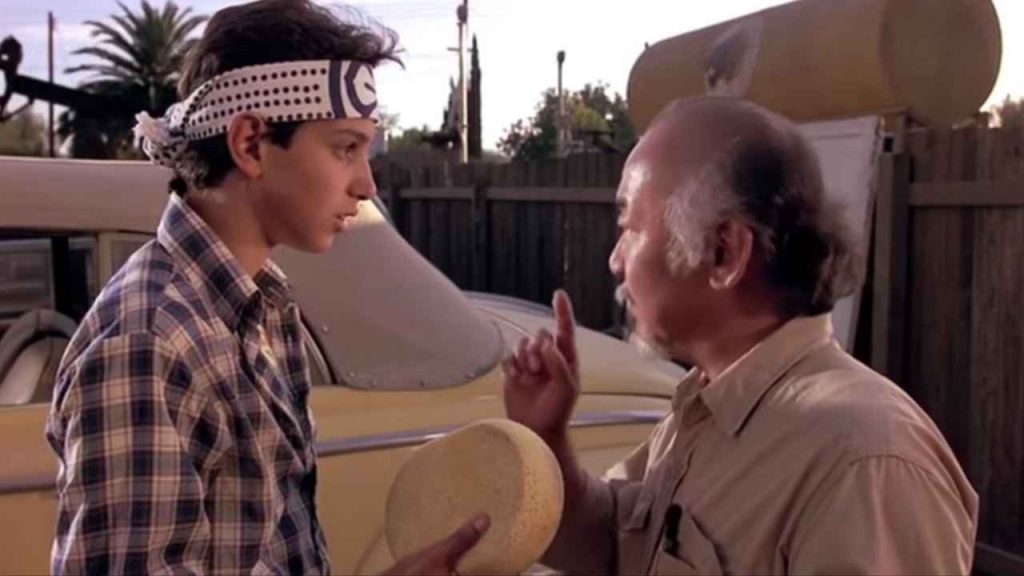 The Karate Kid (1984) is regarded as one of the best martial arts movies of all time and has reached cult status among karate enthusiasts all over the world (the most recent one was stellar as well).

The storyline revolves around the growth and journey of Daniel LaRusso who found karate training and turned his life around. The spirit of self-improvement, attaining growth and maturity, and achieving redemption underline the movie and get primarily sourced from the innovative karate training that Daniel receives from Mr. Miyagi, an old master of the discipline with a powerful personality and technique deeply rooted in his own Japanese heritage.

This uplifting and feel-good movie has several excellent quotable quotes that can brighten up your day if you are a karate enthusiast. Here are some handpicked Karate Kid quotes that are meaningful, enlightening, and fun.

The quote that has become synonymous with the movie involves Mr. Miyagi introducing Daniel to his unique method of karate training. Daniel had very limited time at his disposal preparing for the crucial karate tournament that constitutes the climax of the movie. For this reason, Mr. Miyagi devised a unique training regimen for Daniel that involved him during different household work.

The karate training was actually disguised as the work as Daniel later found out. During this training, Daniel sanded wooden floors, painted fences, and finished painting the house. However, the very first day involved cleaning and waxing a number of classic cars. The quote has Mr. Miyagi showing Daniel the hand motions he should use for the waxing process.

“Lesson not just karate only. Lesson for whole life! Whole life have a balance, everything be better.”

In his inimitable style, Mr. Miyagi explains the essence of karate lessons. The concept of balance, finding inner peace and rhythm, and applying the teachings of karate not just to fight but to have a better life have all been concepts deeply rooted in the karate tradition for centuries.

This is the first glimpse that Daniel has of the deeper philosophical underpinnings of karate. As stated by Mr. Miyagi, the training gradually opens up Daniel’s mind to these aspects of karate, and he evolves into a stronger, more mature person aided by the self-improvement brought on by his accomplishments in karate and Mr. Miyagi’s able training.

“You’re the best friend I ever had.”

For Daniel, moving to a new city and getting into confrontations with the Cobra Kai students was an abject lesson in alienation. Feeling alone and vulnerable was his starting point when he commenced karate lessons with Mr. Miyagi. Mr. Miyagi, while secretive and mysterious earlier on, gradually bonded with Daniel in many ways and became akin to a surrogate father figure and a friend, both of which Daniel lacked and craved.

The evolution of the relationship between Daniel and Mr. Miyagi comes full-circle when he expresses his gratitude for the companionship and mentoring he got from Mr. Miyagi by declaring him his best friend.

“When do I learn how to punch?”

The bullying that Daniel experienced in the hands of the Cobra Kai students resulted in a lot of frustration and anxiety. While he was never lacking in spirit, Daniel did not have the self-defense technique to be able to defend himself successfully. While being under the tutelage of Mr. Miyagi, Daniel grew impatient and wanted to learn offensive techniques.

However, Mr. Miyagi staggered his training, first teaching Daniel the virtue of patience and perseverance before preparing him for the oncoming tournament with the right offensive technique. This quote represents Daniel’s hunger for redemption which was later for tempered by Mr. Miyagi’s training approach and served Daniel well for the rest of his life.

“Daniel-san, you look revenge that way, you start by digging two grave.”

Early on in the movie, Daniel asked Mr. Miyagi to teach him karate after Mr. Miyagi rescued him from yet another attack from the Cobra Kai students. When asked about his motivation to learn, Daniel indicates that he wants revenge. Immediately, Mr. Miyagi gives Daniel one of the most important lessons in karate- thirsting for revenge is futile and revenge consumes a person with hatred.

Anger, ego, and a need to get even never lead to productive consequences and it is imperative for Daniel to understand this thoroughly. The risk of self-destruction is high with a revenge motive and Mr. Miyagi presses this upon Daniel, trying to make sure that he starts his training with the right frame of mind.

“I thought it came from Buddhist temples and stuff like that.”

While talking about karate, Daniel’s ignorance about the discipline surfaces quite early. Instead of history, tradition, and heritage, Daniel’s notions about karate stem from action movies and television which depict a heavily Westernized and watered-down version of the discipline. Consequently, his knowledge of karate is very limited and that is evident from this quote.

Earlier, Mr. Miyagi also observes him copying karate moves from a book. He goes on to impress upon Daniel that a deeper understanding of the discipline needs to come not from his usual sources but from a spirit of exploration and an open mind which he helps Daniel develop with his unique training.

Mr. Miyagi, being a traditionalist, understands well that the spirit of karate is completely against using it for shows of strength, personal gain, or nefarious purposes. Unlike the teacher at Cobra Kai, he wants to enforce upon Daniel this essence of the discipline at the very outset.

By telling Daniel about the focus on self-defense, he immediately creates a contrast with the training methods and approach practiced by the Cobra Kai school and prepares Daniel to understand the real mindset behind karate. The defensive mindset is also an important one to embrace for someone being bullied by bigger and stronger opponents with a vicious streak.

“It’s OK to lose to opponent! Must not lose to fear!”

Finally, this gem of a quote from the climax of the movie encompasses the most important lesson that Mr. Miyagi teaches Daniel. Losing to an opponent is a trivial event that can happen any time. However, losing to oneself by succumbing to fear is a true personal setback.

Here, Mr. Miyagi accomplishes two things in one- he delivers an important personal lesson for Daniel while also motivating him to keep going in the fight. As he was already badly injured, this motivation was extremely important to Daniel, who uses it to keep going and ultimately returns from the fight triumphant.

If you love the Karate Kid franchise, these quotes will take you back to the days of the original movie in the series. Since then, sequels, remakes, and spinoffs have all entertained audiences till this day. However, the magic and charm of the first installment still lives among the minds of audiences.

These are the Karate Kid quotes that we feel best represents the charm of the movie. With these quotes, you can easily revisit the important qualities that make the movie such a cult classic and develop a renewed love for the movie and for the discipline of karate itself. Wanna learn more karate master quotes, check out here!