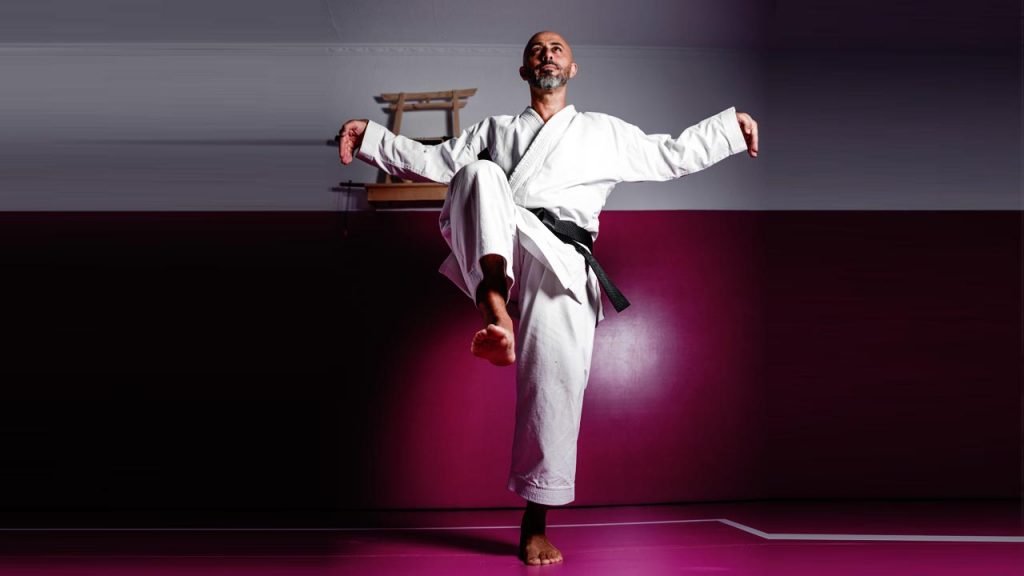 The Karate Kid (1984) starring Ralph Macchio and directed by John G. Avildsen is one of the most fondly recalled karate movies of all time. Millions of watchers fascinated with karate and martial arts in general have pleasing memories of watching this movie and enjoying its intense, gripping storyline. Over the years, the movie has also spawned a series of sequels, remakes, and spinoffs.

One of the most important moments of the movie is the climax where Daniel LaRusso (Macchio) uses what became known as the crane kick to defeat his archrival Johnny Lawrence (William Zabka) in the high stakes All-Valley Under-18 Karate Championship. After being the underdog and taking a beating during most of the bout, it is the crane kick that ultimately brings triumph to LaRusso.

However, many have questioned the legitimacy of the move, both in terms of standard rules of karate tournaments and competitions and specific events outlined in the movie. So, is the Karate Kid crane kick really illegal? Should the referee have disqualified LaRusso or given him a warning or a penalty for using the move? Let’s watch the crane kick video first:

What is the Crane Kick?

The crane kick is basically a flying kick or jump kick that was created specifically for the Karate Kid. It is a version of the mae tob geri kick that is traditionally found in karate. Versions of the kick are also found in other martial art forms.

Famously, this kick was used in a real-world fight scenario to great effect when Lyoto Machida used it to knock out MMA legend Randy Couture in a UFC bout.

For the movie, the move is taught to LaRusso by Mr. Miyagi and eventually used as somewhat of a last resort to defeat his opponent in the climax. It involved the one-legged crane stance that gives the impression of vulnerability. The kick is delivered as a counter move when the opponent is moving in to strike.

The Legal vs. Illegal Debate

In the movie, LaRusso finishes off his opponent with the crane kick and wins the fight. However, many feel that the move was an illegal move and LaRusso should have been disqualified or penalized. This debate arises from a variety of important considerations.

The principal reason why it is widely believed that the Karate Kid crane kick was an illegal move is the fact that LaRusso kicked his opponent squarely in the face. Before the fight, the referee made a note of the rules and clearly mentioned that strikes to the face would not be allowed in the fight. In fact, actor Ralph Macchio has mentioned in multiple interviews that the referee made a clear note of this and that makes the crane kick an illegal move.

Yet, the crane kick was allowed and the fight was declared over. Some believe that for LaRusso, this was a move akin to cheating as the rules before the fight clearly stated no strikes to the face. The factor that contributes to the confusion further is that the scene where the referee makes the comment about the rules was never filmed to be a part of the movie, or was eventually edited out of it. The viewers have no way to know about the rules in advance.

According to the stated rules, LaRusso should not have been awarded a point for the strike. However, the rules in karate tournaments in real life are somewhat different. The rules of the USA National Karate-do Foundation state that front kicks and strikes to the face are actually legal. Apart from open palm strikes, all other strikes to the face are allowed.

However, these rules suggest another way that the Karate Kid crane kick might be actually illegal. According to the rules, tournaments for competitors under 18 are not supposed to feature full-contact fighting. The competitors are supposed to check their strikes to make minimal impact and very light contact. In competitive tournaments, the aim is not to injure the opponent but just to show a superior display of skills and technique.

Since the crane kick was a full-contact, full-extension blow that physically dazed and damaged the opponent, it would have invited a warning or penalty according to the official rules.

A closer look at the fighting sequences in the Karate Kid reveal that they were choreographed in the “point fighting” style of karate where points can be scored with specific strikes and are tallied in the end to decide a winner. This is very different from full-contact karate bouts where the participants do not hold back with their strikes.

In fact, a little earlier in their famous bout, Lawrence himself uses a jump kick. While it does not make contact with LaRusso’s head due to an evasive maneuver, it easily could have and is allowed in the fight, showing that the referee ultimately considers it a legal move.

Another important consideration is the fact that LaRusso was already severely injured while he used the move. In actual karate tournaments, there are clear rules regarding injured fighters. In a real bout, LaRusso would not have been allowed to compete further with that level of injury.

It is possible that the referee showed leniency to LaRusso keeping in mind his injured state and this is why the crane kick was deemed a legitimate move.

However, the referee also allowed an elbow strike to a trapped knee performed by Lawrence, which could also be considered an illegal strike.

While all the debate regarding the Karate Kid crane kick stems from the popularity of the movie and the immense connection viewers feel with the characters, whether the move is legal or illegal ultimately becomes trivial if the narrative of the movie and the personal journey of the protagonist is considered.

The crane kick was mostly a “signature move”; a specialty of Mr. Miyagi that LaRusso employs at a stage where he was severely physically compromised.

Considering the themes of redemption and personal growth portrayed in the movie, the fact that this move ends the movie is symbolic of the entire character arc of the protagonist and a split-second portrayal of his important journey.

The Karate Kid crane kick is also visually dramatic and makes an immediate impact. From a cinematic perspective, it can make a lot of sense to end a climactic moment with such an exaggerated and visually enticing move purely to draw in the audience and give them a sense of closure.

Therefore, while the crane kick might have been illegal both by the standard rules set in the movie and commonly followed rules in real-life bouts, its use in the movie is artistically defensible.

There are many more instances in the movie where something would be considered illegal or bad practice according to real life karate standards. However, they have all been employed in the movie as artistic choices to create something that has achieved cult status with fight fans and spawned legendary fictional characters that have stood the test of time.

Ultimately, it can be said that it does not matter whether the Karate Kid crane kick was illegal. It serves its purpose in the movie, is considered an iconic movie, and has become an integral part of the global culture when it comes to karate and other forms of martial arts. Want to learn crane kick technique in real life, check out this video: