55 Funny Karate Jokes That Will Make You Laugh Out Loud 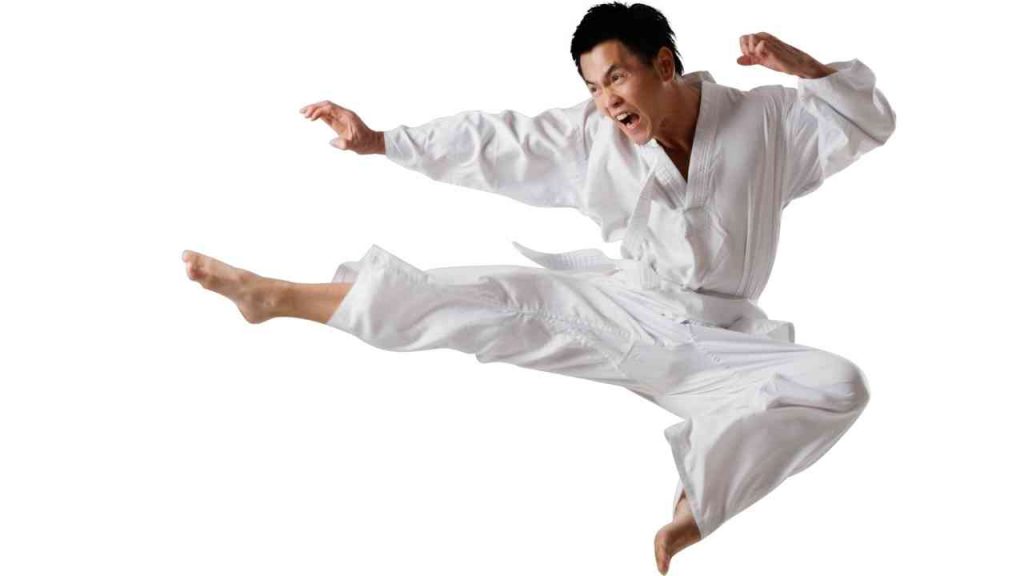 Are you and your family and friends into Karate? Are you an avid karate enthusiast? Are you all always talking about Karate during family functions and parties? If you nodded a yes to all these questions – you are at the right place! I have here for you a long list of Karate jokes to keep it fun and light.

So, the next time you go to a family function, a night out or a training session at a dojo, you can always have a backup joke to get all your folks laughing. So, without further ado, let’s get started!

Ready to clutch your stomach and roll on the floor while laughing? Well, I have here for you some of the most hilarious food-related karate jokes:

1.     What is the favourite drink of a karateka? Punch

2.     What is a Ninja’s favourite food after karate class? Smack-aroni and Cheese

3.     Your karate master is offering you a fruity drink, why should you duck? It’s a fruit punch

4.  What did the Karate master say when he took back his nachos from a thief? That’s not- cho-cheese!

5.     What is the American version of karate chop? A Connecti Cut

6.     What karate move can destroy a whole town in Kansas? Tornado kick

8.     What type of martial arts do British people like? Kara-Tea

9.     Why is a Karate tournament the coolest place in town? It is full of fans

10.  What do you call a pig that does karate? Porkchop

11.  What do you call a sheep doing karate? Lambchop

12.  What do you call a deer who knows karate? Tae-fawn-doe

13.  What do you call a bear who knows karate? Griz Lee

14.  Which high-kicking ferret won the Gold in TaeKwonDo at the ’92 Olympic Games? Herb Ferretz.

15.  What type of martial arts does a monkey practice? Kung-Fu

16.  What do you call it after a big storm and a bunch of sheep tumble down the muddy hill while practicing their Karate? A Lamb-slide

Inappropriate Karate Jokes (we recommend not using them)

17.  What do you call someone with no legs doing karate? Partial Arts

18.  What do you get when you mix a pig and a karate master? Pork chops

19.  Why do Indie kids suck at karate? They never got past the white belt

20.  Why did his karate instructor finally come to an end? His boss found out he wasn’t qualified and just enjoyed kicking children

21.  I went to my favorite bar last night. A Chinese guy sits down next to me. I ask him “hey, do you know karate or some other martial arts”? He says “why, because I’m Asian”? I said, “no, because you’re drinking my beer”.

22.  Karate student to his master: “Master Akira, why do Asians all look the same?” “I am not Master Akira”

23.  Four nerds were sitting down in a room talking about sports. One nerd says to the other “Hey, do you know what taekwondo is?” the other replied, “Nope, never heard of that Pokémon”

24.  A very drunk guy starts beating up a nun on the street. He throws kicks, uppercuts, regular punches, even some drunk karate moves. Once he is exhausted, he steps back and says “You disappoint me, Batman”.

25.  What kind of vegetable would Bruce Lee be? Brock O Lee

26.  What does Bruce Lee drink when he’s thirsty? WattahhH!!!

28.  Do you know what happened to Bruce Lee after he fought Chuck Norris? He became Bruised Lee

29.  A sith lord became a karate sensei. It was master Vader.

30.  My karate teacher wore lipstick to class. Guess how did she look? She looked sensational

32.  My Son’s Karate Teacher Told me a Great Joke. He has great sensei humour.

33.  Why do karate instructors get easily upset? They’re sensei-tive.

34.  Why did the karate student keep killing all his teachers? I guess he became desensitized.

35.  Why did the Cupboard learn Karate? For Shelf-Defense

36.  What is it called when a Karate instructor kicks a thief out of his pro-shop for stealing? Shelf Defense

Yes, I had to have some karate instructor jokes in my list too. After all, why not? So, take a look!

37.  I saw my old karate instructor in his car yesterday. He drove a KKIIIIIAAAAA.

38. When a martial arts instructor gets hurt, it’s called a ninjury.

39. I warn you not to mess with me! I know Karate, Judo, Aikido, Jiu Jitsu, and 22 other Japanese words.

40.  What do you call a ginger kid who’s good at karate? The Carroty Kid.

41.  I beat a black belt at karate. My next opponent is a red sock.

42.  What’s the difference between karate and judo? Karate is a method of self-defense, and judo is what bagels are made of.

43.  I decided to teach Karate to my neighbor’s kid. He was enthusiastic the first 2 days but then quit before he could finish painting the fences…

44.  Yesterday in karate class whenever we were supposed to punch left, I punched right…. *Long pause* “What?” “Idk I always mess up the punch line”

46.  There are so many forms of martial arts, it’s hard to keep track of them. Kind of …Kung Fusing

47.   What do you call a lawyer who knows karate? A self-defense attorney.

48.  A student at the karate convention asks a teacher where to stay. They respond, “At the Hyaaaatt!”

49.  Two men got into a fight at the bar. As one throws a punch, the other asks “Do you know karate?” the other man responds “No”. “You don’t strike me as someone who would”.

50.  I’ve always been terrible at Karate, so my Sensei told me “Wax on, Wax off.” I now have burning pain, but my chest is spotless. What does this have to do with Karate?

51.  There was a man who became the karate champion on Christmas Day. So he decided to go by the name, “The Nutcracker.”

52.  What do you get when you cross Michael Jackson with the Karate Kid? Jacks on Jacks off.

53.  Where can you find the highest Karate black belt ranks on earth? Deserts. Some reach as high as 150 degrees.

54.  What time of year do most Karate students get injured? The Fall

55.  What time of year is the best for learning jumping kicks? The Spring

So, how did you like these very funny karate jokes mentioned above? I’m sure, with the help of this, you will have a long and quite witty list prepared for any unforeseen circumstances or to lighten the mood. For more such amazing articles on everything Karate, don’t forget to visit the Karate Blog!