Does Karate Have Grappling? 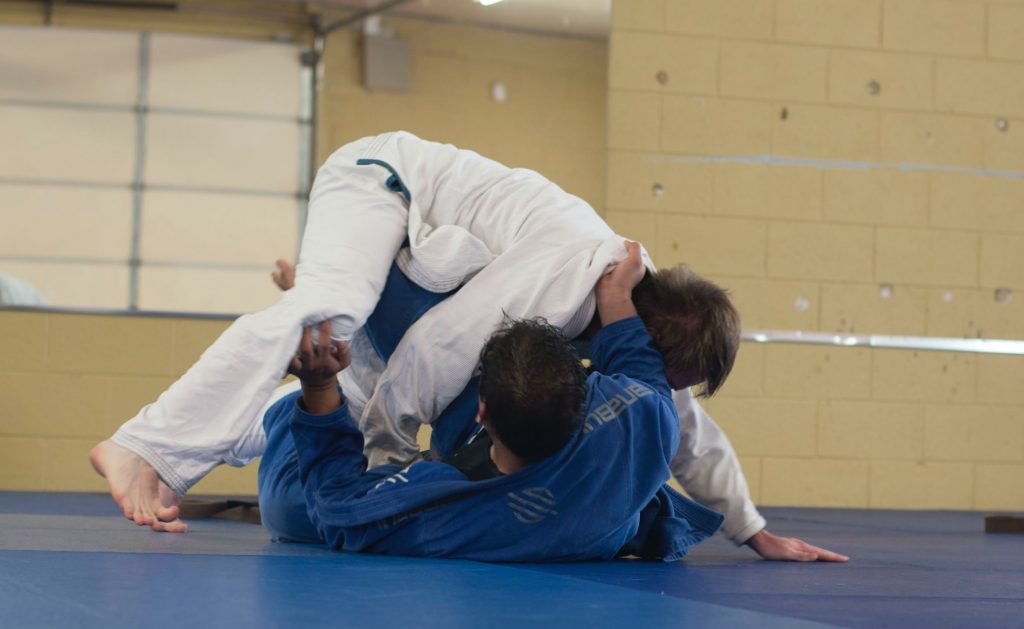 What do you do if you get knocked down during a fight?

The first thing is to get back up again and karateka learn explosive, quick ways of getting back on their feet.

However, that isn’t always possible, which means you’re in for some ground fighting. But, does Karate grappling exist? Will you learn what you need to know if you end up on the ground in a fight? Let’s find out!

What’s All This About Grappling?

Watch any martial arts movie with this in mind and you’ll notice one thing, they don’t spend much time on the ground. If they do get knocked down they jump up immediately and explosively, often using what’s called a kip up. If you don’t know what that is or would like to learn how to do it, check out this video here.

In other words, Karate fighters aren’t looking to spend much time on the ground, rolling around like a wrestler.

So what’s all this about Karate grappling?

With the popularity of MMA and grappling martial arts styles like Judo and Brazilian Jiu-Jitsu, people have become more interested in fighting on the ground. In fact, talk to any of these practitioners and they will quote an oft-used but misapplied stat claiming that 90-95% of all fights end up on the ground, so you’ve got to learn to grapple to be prepared.

(This info comes from a study of fights between LA police officers and suspects. Since a police officer’s goal is to subdue and arrest an individual it makes sense that somebody ends up on the ground the vast majority of fights.)

However, in real life, far fewer fights actually end up (and continue) on the ground. Rather, whoever ends up on the ground is typically the loser.

Karate Is a Stand Up Art

A martial artist from a grappling martial arts background will tell you that Karate is incomplete without grappling moves. In fact, many Karate dojos now incorporate Judo or other grappling arts techniques into their curriculum to fill the “gap” in their student’s training.

However, original Karate didn’t bother with grappling techniques designed to subdue or control an opponent. Karate is straightforward. It’s all about powerful striking techniques and creating an impenetrable defense. If you’ve ever seen an advanced Karate student blast through a wooden board, you know what we mean.

In fact, a staunch karateka will tell you that your aim in a fight should never be to end up on the ground. And you most certainly shouldn’t stay there if you get knocked down. The first person on the ground during a fight is usually the loser. Instead of making yourself comfortable down there, you should be getting back on your feet and ready to devastate your opponent from a position of power.

All that to say, Karate ground fighting does exist, or should we say did exist. The techniques are not often used, particularly by dojos in the West, and are becoming lost through the years.

Why? First, you need to understand something about Okinawan culture.

Okinawans spend a lot more time on the ground than we do in the West. If they want to take an afternoon snooze, they’ll lay down on the ground, on a stone wall by the side of the road, on top of a van or anywhere else they can get comfy. In their culture, this person is not a bum, but rather a hard-working upstanding citizen who needed to take a break.

It’s also customary to squat while waiting in line or other similar activities. In general, Okinawans don’t necessarily need furniture to sit or lay on.

And this is modern-day. You can imagine how it was more common back at the turn of the last century when people worked primarily outdoors.

Thus, the everyday person needed a way to defend themselves in a fight that starts with them on the ground. This is where Karate ground fighting comes in. There are a handful of techniques that the Okinawans would use to defend themselves if an attack came while they were lying on the ground. However, they would seek to get on their feet again as quickly as possible and assume a more powerful defensive position.

So, will you see Karate wrestling or grappling techniques in a traditional Karate dojo? Not likely, but it is common to see some schools incorporating judo or other grappling arts techniques into their curriculum. The aim is to create a more well-rounded fighter.

To be honest, this type of fighting is more suited to the ring than the street. On the street, your singular goal is to take down your opponent and get away. It isn’t always even necessary to completely incapacitate your opponent. Though inhibiting their ability to chase you is ideal, it isn’t always required.

Ultimately, the goal of martial arts is defense. Do whatever it takes to put your opponent on the ground long enough for you to get away. If that requires a good grappling technique, by all means, use it. However, a powerful Karate punch to a vulnerable point will be just as, if not more, effective in most cases.

Looking to perfect that powerful punch? Check out our article on how to do a Karate punch!