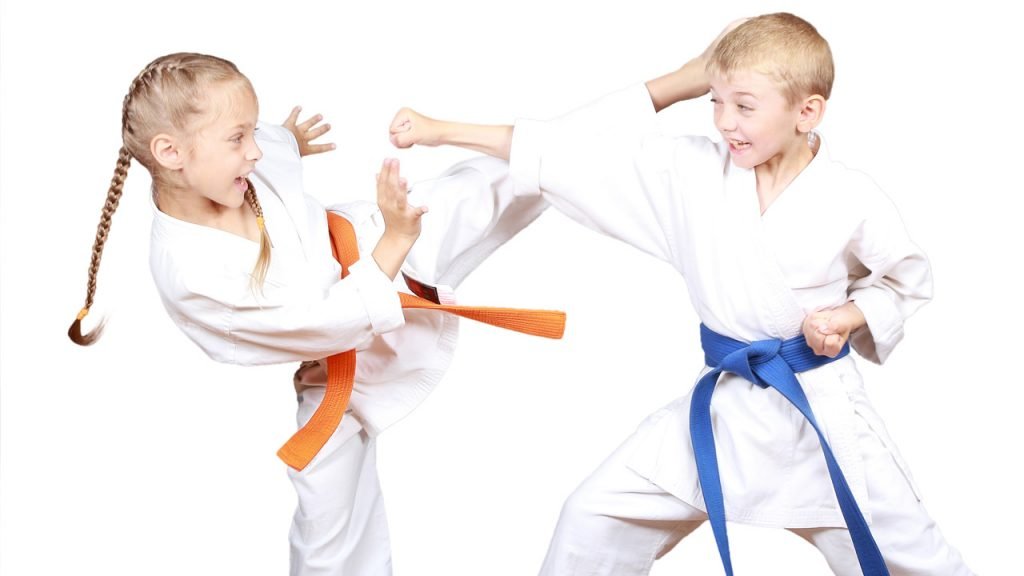 Children (and sometimes adults too) learn best when it doesn’t feel like learning. Haven’t we all learnt a lot of valuable lessons just by playing when we were kids? When education takes the form of a game, especially in young children, the impressions last longer. They become embedded in their subconscious. And for a high-discipline martial art like karate, where the karateka needs to be always learning, such methods are enjoyable for both the teacher and the student.

All Work and No Play

Karate games for kids can also be a deal-maker for children who are apprehensive about the rigors of training. They might have a preconceived notion that there will some hard exercise regimen and a lot of falling and getting hurt. For those kids, subtly introducing a lesson in the form of a game will make them relaxed, comfortable, and primed for tutoring. And ideally, pique their interest to the point where they practice karate even at home when they haven’t been asked to!

In terms of participation, the Sensei can have all the kids participate at the same time, like in “Sensei Says” or pit students against one another in a round of ”Catch Your Tail.” Or, they can form groups that try to outwit each other in the “Numbers Game”; if not, all the students can try beating the Sensei in the “Ninja Game.”

In terms of their benefits, games can be invented or fine-tuned focused on improving students’ hand-eye coordination, or for strength training, or purely for fun to relax the mood. As for routines, games can be used as an alternative to warm-ups, or right after warming up. If needed, games can be woven together in between sessions as a light break; or at the end of the session to end on a high note. The kid in Bad Santa could have certainly benefited from playing games such as this.

The possibilities are as unlimited as the Sensei’s imagination. And parents would love to send their children to a dojo where they play “the karate kid karate games,” wouldn’t they?

What Are The Best Karate Games For Kids, Though?

One of the most popular children’s games is Simon Says. For karate class games, it is repurposed as “Sensei Says.” The Sensei makes the students stand a good distance away from one another and calls out a move or a sequence. The students must act only if the moves are preceded by “Sensei Says.”

This karate game helps improve focus, concentration; and improves memory-recall and responsiveness, especially because the Sensei can make things difficult by adding “Simon Says” into the mix to throw kids off.

Sensei says is most effective when played at the beginning of each session as a recap for the previous lessons, or at the end of a session as a recap for that day’s lessons. It falls into the last category – Sensei against the students – and can be played until only one student remains. But in classes with a larger number of students, a scoring system can be used. Students remember their individual scores and try to improve it each time the game is played.

In this variation of Tag suggested by Sandoval, a karateka has another belt tied to their actual belt. Another karateka tries to pull the belt away. It can be made even more interesting by imposing limitations. A simple way of increasing the difficulty is to disallow kicks, for example, or to invert the roles – the karateka with the extra belt is allowed to punch and defend, but the attacker must reach the belt without any attacking shots.

Usually, the sensei breaks off the students in pairs and the winners progress to the next rounds. This way, all students get to play and that increases their competitive spirit.

This Sensei versus students game recommended by SportsRec is aimed at improving memory recall as well as reflexes. Moves and sequences are given numbers (or alphabets or codes) and the students must execute them as soon as the Sensei calls them out. To increase the complexity, longer sequences can be called out, or the numbers called out faster; or both. This keeps the students on their toes, literally, and figuratively.

Karate by Jesse recommends this as one of their karate games for class aimed mainly at keeping spirits high. The aim of the game is for students to sneak up to their Sensei, who has their back to the students. What makes it fun is that the students should freeze the instant the Sensei turns to look at them, which can happen at any time.

Although full of fun, this game helps improve planning, movement, and agility.

Even UNICEF gets into the game (pun intended) and has a few recommendations on karate lessons for kids. For us, the pick of the lot is this game where the Sensei drops an object from a small height and the student must kick or punch it before it hits the ground. For large classes, our personal tweak is to make this a one-on-one, best of three or five game, pitting students against one another.

Given the comparatively higher intensity in this karate game, it might be best deployed as an alternative to the regular karate drills to bring the students “in the zone.”

The name says it all. None of the previous games needed any advance preparation, but this one flips that idea on its head. Based on items that are available in the dojo, anything from a small, quick makeshift course to an elaborately designed, semi-permanent course can be created.

Boxing scene provides an example with detailed instructions on how to create a suitably difficult obstacle course without any objects by using volunteering students instead. Use your own creativity to add more obstacles, or increase the complexity by having more people at each obstacle, or both.

Our recommendation is to do all the above, and add rules at each obstacle, such as using only back-kicks at one obstacle, drop-kicks at another, and so on. This is our tweak based on the idea from Black Belt Wiki.

The only drawback is that you might not be able to use this if you teach toddler karate.

As with the Ninja game, a lot of party games can be played almost unchanged in the dojo. These games are for pure fun and to relax the environment after a frenetic session, for example, or as an ice-breaker for introductory classes.

The classic pin-the-donkey-tail can become pin-the-karate-belt on a practice dummy, or on a student in the absence of actual dummies.

8. Limbo and Jump The Stick

Most kids play Limbo at birthday parties. Use a long bamboo stick or tie a couple of belts tied end-to-end held by a couple of volunteer students underneath which the rest of the students take turns to pass. The opposite version of this game – jump the stick – also is a salient idea in such a setting. The tied belts are held low near the ground and students jump over it. The height is raised gradually and the students that cannot jump over are out.

Our personal tweak to these karate games is to add musical chairs to the mix. The two volunteers holding the belts are blindfolded. While the rest of the students are passing underneath, the volunteers decide to drop the belt slightly, whenever they want, and the students that come in contact with the belt are out. For jump-the-stick, they hold the belt at an easy enough height, but raise it suddenly without warning.

It is also possible to make groups or teams for these versions and pit them against each other. This way, the Sensei can impart team-building among the students and sharpen their competitive streak.

All these party games, as well as the next one, are the courtesy of How They Play.

It will be hard to find a martial arts student who isn’t a fan of martial arts movies. In this last recommendation called “Kung Fu Theater”, all the karateka come together to choreograph fight moves in slow motion, not unlike the movies.

Students lined up and the Sensei going after them one-by-one, or guiding one student against another, or a group of students fighting another group, are all possible variants of this game. Just make sure they don’t turn this game into a Deadpool scene – their parents could be upset.

Fair warning: although it sounds simple, it will take a few tries and some decent practice to get it right; and therein lies the fun of this game. If the synchronization fails, great hilarity ensues rapidly. We can’t have the defender fall clutching his stomach when the attacker makes a drop-kick to the head, can we?

If just reading about these free karate games brought a smile to your face and gave you some ideas, imagine the fun that might result in having the students actually play them.

As we said in the beginning, as a Sensei or as a parent (or both), these games are a sure-fire way of ensuring ongoing interest in karate in your karateka, while making them better physically and mentally. The games improve not only their motor skills and give them a decent exercise, but increase their focus, memory, concentration, and agility too.

Not to mention squeals of laughter and cries of joy.

Which has been your favorite among these? Do you have your own karate game that you would like to share with us? Perhaps a tweaked version of any of these? Don’t hesitate to reach out to us and let us know.