Which is The Best Karate Style for Self-Defense 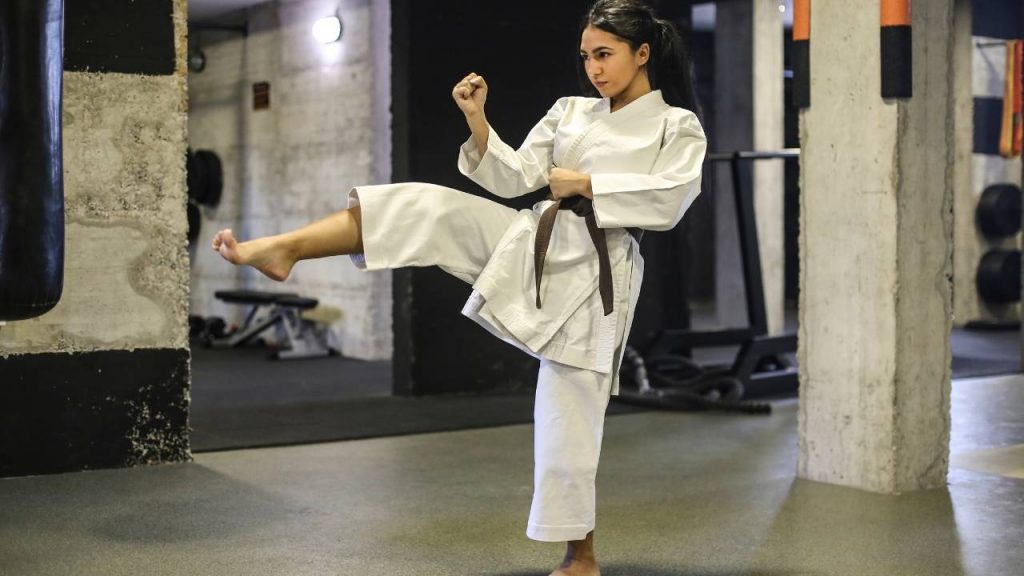 Karate is Karate. What you learn at one school is the same as what you’ll learn at another. Any study of Karate will prepare you to defend yourself on the street, right?

There are dozens of styles of Karate out there — some more showy and sporty than others. If you really want to study Karate for self-defense, you’ll have to be aware of some things before choosing a school. Learn about the best Karate style for self-defense and what to look for in a school here.

Though Karate is based on ancient martial arts styles that come from China, it is a relatively young style. It was named and formed as an official martial arts style on the island of Okinawa in the 1930s and spread by soldiers returning home after World War II.

There are four main Karate styles generally recognized as the most prominent. Most of the other modern-day Karate styles are based on one or more of these four, however loosely.

Shotokan Karate is hands-down the most popular style of Karate in the world. It comes from Tokyo and was taught by Master Gichin Funakoshi, the Okinawan who is generally recognized as the founder of modern Karate.

Traditionally taught Shotokan is effective for street fighting and self-defense. Students learn techniques that work in the real world as well as practice with students of other sizes and ability levels to develop their skills against attackers of all types.

Shito-Ryu is a heavily technique-based art. There are 50 katas, or predetermined sets of techniques, that students learn. Practicing these katas allow students to develop muscle memory to defend against attacks in the real world. They also require holding deep stances and other feats of strength to perform correctly, which helps build a student’s physique and prepare them physically for a fight.

Goju-Ryu Karate employs the powerful counter-strike movements that Karate is known for, but uses a softer and more circular form of defense. This can be compared to what you would expect to see in jujitsu forms of fighting.

Wado-Ryu Karate relies even more heavily on jujitsu-style techniques. It is considered an off-shoot of Shotokan, but is less direct and choppy, for lack of a better word.

Practitioner movements are more fluid and there is more emphasis on evading attacks rather than contact sparring. All Karate styles carry some spiritual element, but this one emphasizes that side of things more heavily and focuses on harmony.

Which one is the best self-defense fighting style? Is Karate good for self-defense or is another type of martial art more effective?

To understand that, it’s important to understand sports Karate styles vs full-contact styles.

The Detriment of Sports Karate

Why do people even ask if Karate is good for self-defense? The natural response should be yes, that’s kind of the whole point of any martial art.

Traditionally, Okinawan Karate was developed and trained for self-defense. When it was brought to Japan, the Japanese focused on using the art as a way to promote spiritual growth.

However, modern times have shaped a different Karate philosophy — sports Karate. This way of thinking is more focused on earning points in a match rather than training for self-defense or bettering oneself spiritually.

There is nothing wrong with studying this type of Karate because you enjoy it. But make no mistake, this style of karate is not for use on the street. In fact, you are training many habits that could prove to be dangerous in a street fight.

For example, sport karate practitioners aim to touch their opponents to score a point rather than devastate them with a powerful attack. Plus, they perform “fancy” techniques to earn points that would be nearly useless and leave them vulnerable in a real fight.

We could go on, but we’ll stop there. Just note that this type of Karate is basically useless on the street and is part of what has made people question the effectiveness of Karate as self-defense in the first place.

On the other end of the spectrum, Kyokushin Karate has emerged as one of the most prominent full-contact styles of Karate.

These folks don’t mess around so if you decide you study Kyokushin, be prepared for pain. However, the style turns out some cunning fighters who can take a punch. If you’re serious about learning Karate for self-defense, this is a good style to choose.

There is a lot of emphasis on developing mental and physical toughness since these traits are required in a real fight. To develop them, the style focuses on body conditioning and full-contact sparring. The former means you stand there and let your classmates punch and kick you so you learn to take a hit. The latter means you can defend yourself, but if you don’t block an attack, be prepared for pain.

Of course, not everyone will enjoy purposefully allowing their classmates to pummel them. Thus, Kyokushin Karate is not for everyone.

One other thing to consider is the type of instructor you choose. The quality of instruction is arguably more important for self-defense than the particular style you decide to study. Virtually any serious sensei who teaches a traditional form of Karate will teach you how to defend yourself well.

However, there are many enterprising people with black belts who open up Karate dojos as a moneymaker. To ensure people keep coming, they often aren’t as hard on their students and are more lax about requirements when passing people from one belt to the next. If you want to study Karate for self-defense, you’ll want to stay away from these kinds of schools.

The Best Karate Style for Self-Defense

What does all this mean? Which is the best style of Karate for self-defense?

Due to the prevalence of Shotokan Karate, we recommend this style for most students. As long as you choose a serious sensei who teaches in the traditional way, you will receive the training you need to defend yourself on the street.

If you want to take things a step further and become a hard-core fighter, Kyokushin is probably the “best” self-defense Karate style. We put that in quotation marks because the “best” really is relative and depends on a number of factors.

Interested in learning more about the best Karate schools in the world? Check out our post here!